‘Water is the Key to Life’ 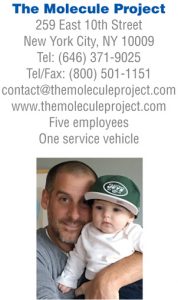 Alex Venet is man on a mission. He is positively obsessed with water. “We believe water should be H2O and minerals, not water with minerals, lead, pharmaceuticals and pesticides. We think water should just be water. That’s the goal of our company—to sell fresh water and try to steer people away from bottled water.” Venet is co-founder and CEO of The Molecule Project in New York City. “We are hyper-filtering local tap water down to its original and pure form (the H2O molecule) leaving pure, healthy and tasty water.” Central to his business is a $25,000 (USD) filtration apparatus, which is the showpiece of the Molecule Project Water Store in the East Village. It’s a massive reverse osmosis system with UV, ozone and a mineral cartridge that also alkalizes the water. “We definitely educated ourselves. Over time, we became obsessed. We got the water down to one ppm. Then we added deionization and got down to zero ppm. Now, with minerals, our water is alkalized at 8.5. We know which water filtration systems work and which ones don’t. We got it down.”

The native New Yorker said, “I am an art dealer by trade. I buy and sell contemporary art. My mother is an art dealer and my father is a sculptor. I did not know much about water. I was selling Andy Warhols, not water. I taught myself. It was a big learning curve.” The initial refilling idea for the company came from his friend Adam Ruhf, who moved to New York from California, where water cafes and refilling stations were common. It was a novel idea in New York City. That was five years ago. “We have refilled around 400,000 gallons of water since then. That’s a lot of water bottles we took off the shelf. We believe we’ve prevented about 1.3 million, 16-ounce bottles of water from being manufactured and distributed. We are really proud of that.” 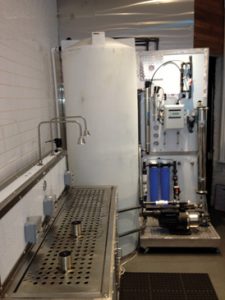 ‘Growing at a good pace’
Venet claims he likes to “take baby steps and move slow and steady.” Yet since opening on July 14, 2012, The Molecule Project has evolved from selling pure water to also selling and installing water purification systems for residential and commercial customers, to manufacturing shower filters, the first step toward building a Molecule brand line. “We’re growing at a good pace. This is our best year so far.” Next up is a sister business in Puerto Rico, likely to open in early October. “The water there is compromised, as well. We’ll do a water store and filtration, and plan to start manufacturing and selling our own systems. We’re working on our own reverse osmosis,” and after that, possibly franchising options in the next six to 12 months.

Initially Venet was “just the investor,” but after roughly a year, Ruhf left the company for health reasons. “When he left, the store stayed open and I didn’t pay too much attention to it. Then business started to grow and I got more and more involved. Building a career while keeping people safe from contaminated water was very motivating,” he said. “Our biggest challenge was that we were selling purified New York City tap water. There were a lot of proud New Yorkers contesting the need to purify the water. New York has a reputation for good water, despite the chlorine, lead, fluoride and VOCs. Yes, it is better than most cities in the country, yet better doesn’t mean perfect. We got a lot of media attention—both good and bad coverage.” That included Time magazine, The Huffington Post, Self magazine and the front page of The Wall Street Journal.

“We try and educate our customers. Nine of 10 calls we get are people who want the fluoride and lead out of the water. Also, the water pipes in New York are around 100 years old, so there are major lead issues everywhere. We sell Bluewater RO systems to treat the fluoride. Our best sellers are our Bluewater RO systems and a 0.2-micron, full-flow system. For lead, we use 0.5-micron blocks, a full-flow system and KDF as well. We also tell our customers about the environmental impact of bottled water—[contributing to] the Great Pacific Garbage Patch, the amount of gas burned to manufacture and distribute water bottles, the plastic that leaches chemicals into the water.”

Demand for shower filters
Another best seller is the shower filter. “People don’t realize that tap water normally contains as much chlorine as swimming pools. There are a lot of positive effects from a shower filter. People notice it right away. Now we’re making our own line of shower filters. We’ll start manufacturing those in the next three months. We want our own brand.”

Though The Molecule Project is on a steady trajectory, there have been some bumps along the way. “When I invested in the business, we were really depending on a delivery component. Most New Yorkers don’t drive and they don’t want to be carrying a five-gallon jug of water that weighs about 40 pounds. We were delivering five-gallon jugs all day long,” by tricycle to further lessen the carbon footprint. “Then the state asked us to stop delivering because the second you put a cap on a bottle and deliver it you’re supposed to be a bottling facility. We’re not set up for that; we’re a vending facility. Besides that, the bottling facility is the old model. I don’t want to burn any gas delivering bottles to anybody.”

That’s when The Molecule Project moved to selling filtration systems “so people could make their own purified water at home. It’s environmentally friendly and saves money. We sell a purification system that ends up being nine cents a gallon. It produces 6,000 gallons. It’s cheaper than bottled water and better quality. When we started selling RO and other purification systems, it was another learning curve. We had to find people to install. My general manager, Manny, is an amazing RO installer. Now we sell systems all over the city, mainly Brooklyn, Manhattan and Queens.” Today Venet runs the company with his wife, Chelsea. “She takes care of the numbers: accounting, payroll, all the difficult stuff.”

Though he continues to buy and sell contemporary art, Venet has discovered a real zeal for water. “I’ve remained in the business because I believe there isn’t anything more important than healthy drinking water. I believe in it so much that my stock portfolio is 75-percent water stocks. I always feel good when a mother buys a system from us to provide clean drinking water for her family. Water is healthcare. Water is the key to life.”