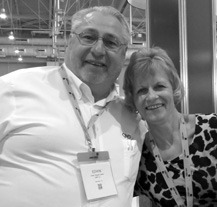 Edwin L. Roberts, Master Water Specialist and Director of Sales and Marketing at QMP, Inc. died suddenly on June 8, leaving the industry reeling. A man who, by all accounts, never had a bad word to say or said against him, he was considered a gentle man with a sense of pride and ethics nearly unmatched. Roberts was known to be a friend and colleague to many across the nation and was a sought-after figure at the annual trade shows. His smile was genuine, his handshake strong and his spirit upbeat.
Said Susan Kernan of Precision Installation Products, “When Ed used to see me, he would get this huge smile on his face and give me a big hug, always asking, ‘So how’s Susie Q doing today?’ Besides my father, Ed was one of only a handful of people who called me that. He was truly a man with a big smile and big heart. I feel blessed to have known him. He will truly be missed in the water industry.” Sid Korob of Good Water Warehouse said, “He was a true pro and the type of guy that you never heard a bad thing about!”

Dan Melendez of AXEON spent many years working with Roberts and considered him a great friend. “He was great, supportive, loved his customers and he was always happy.” Freddy Vidal of QMP, Inc. said, “Ed was a really honest and good person, someone who was easy to deal with. All of us are shattered by this great loss. And in honor of Ed, we’ve retired his office space. We are a big family here and Ed was a huge part of it. The sadness is overwhelming.”
Roberts joined Hydrotech/Water Group in 1995, after a long stint at Pura as Sales Manager. In 2013, he joined QMP, Inc. as Director of Sales. Throughout his career in the water treatment industry, he made lifetime friends and associates who treasured his place in their lives. The sadness at the other end of the telephone line was palpable on each call I made, seeking tributes from close friends and colleagues. Godspeed, Ed. You will be sorely missed for a long time to come.