Congratulations – You Survived the Great Recession!

For the past four years, the editors of WC&P have provided the opportunity to dive deeply into market and economic data in an attempt to predict the year ahead. (See Can You Beat the Curve?, March 2007, 2007 Was a Bad Year–Is There Worse to Come?, March 2008 and Trying to Predict the Turnaround, May 2009). This series of articles began as an effort to demonstrate the residential water treatment market was linked to the US housing market (which we were able to prove) and has evolved into forecasting for residential water treatment businesses in general. From 2007 through 2010, we predicted the volume of POE residential water treatment systems shipped in the US one year in advance with a margin of error of less than five percent. 2011 will present an entirely new set of prediction challenges. The intent of this article is to again try and predict the months ahead despite the fast pace of change and unprecedented upheavals occurring in the market. This is not intended to be a guide and should not be used as such.

One of the great mysteries in business are those moments when the US Federal Reserve formally announces that the American economy has officially entered into or climbed out of a recession. Business owners and managers generally have a gut feel for the state of the overall economy and when the ‘Fed’ makes an announcement about recessions they often wonder if Washington has a clue. The unofficially named Great Recession was declared over in June 2009 – but the residential water treatment equipment industry can be forgiven for wondering if that’s truly the case. The economy is still rough and will be for some time, but the good news is that we’ve turned the corner and will probably experience overall growth in 2011 for the first time in six years.

The formal definition of a recession is simply “a period when GDP falls (negative real economic growth) for at least two quarters in a row”. Since 1980 there have been four officially declared recessions in the US – July 1981-November 1982, July 1990-March 1991, March 2001-November 2001 and December 2007-June 2009. Ironically, the residential water treatment equipment industry has not been greatly impacted by prior recessions. We’re more captive to the ups and downs of the home construction industry and we’ve been able to prove that since 1990 the single most accurate predictor of POE residential water treatment equipment is the number of new homes sold. Since 1990, the Water Quality Association (WQA) has been tracking the number of control valves shipped in the US in a report utilizing voluntarily provided numbers from all major manufacturers. This is a service that WQA provides to its members, and because almost every piece of POE residential water treatment equipment requires a control valve, it’s probably the best and most accurate indicator of the number of POE units shipped and installed in the US. From 1990 to 2005, we rode the housing boom and there was a one-to-one correlation between the number of new homes sold and the number of residential control valves our industry shipped. This is not to say that each new home sold received one of those control valves – it merely means that from 1990 to 2005, the two numbers were very closely linked (though control valve shipments did tend to lag behind new home sales by six to eight months). Note that control valve shipments are not linked to housing start numbers, the number of existing homes sold, or the number of construction permits filed for. The general lesson to take from this seems to be that new home sales are directly linked to deep recessions and that the negative impact upon that industry cascades down to our own. 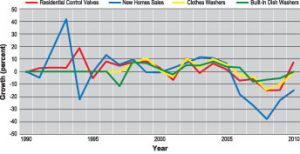 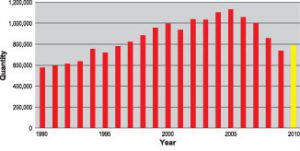 During the Great Recession of 2008, the number of new homes sold declined considerably – from the all-time highs of 2005 to 2010, the number of new homes sold annually has declined by 75 percent. Fortunately for our industry the correlation between the number of new homes sold and the number of control valves shipped (that had held tight for 15 years) came apart. The decline in the number of control valves shipped annually from our peak year (during the 2005 to 2010 period) is only 30.4 percent. Although a market decline of almost a third in five years is drastic, we’re fortunate compared to those in the housing construction industry and their loss of three quarters of their business over the same period. When new home sales numbers and control valve shipment numbers de-linked, we had to fall back on the second best historical predictor of POE equipment sales – industry shipment report numbers for clothes washers and built-in dishwashers. For the past 20 years the shipments of these products have more or less mirrored those of control valves, though on a much larger scale. For each control valve shipped the appliance industry has historically shipped nine clothes washers and seven built-in dishwashers. The link between these numbers has generally continued to hold despite the drastic reduction in new home sales. Unlike new home sales with the six to eight month lag before impact upon control valve shipment, appliance shipments tend to track with control valves in real time. 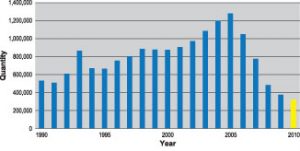 What seems to be emerging is a pattern of shipments for control valves, washing machines and dishwashers that represents a “replacement rate” – where a significant number of units are being sold to replace older systems that have reached the end of their service life. The number of POE systems going into homes that did not exist the prior year has dropped off and will probably not increase again until growth in new home sales returns.

What’s the lowest we could go?
Experts in our industry have debated what the natural replacement rate for POE water softeners and filters actually are. The natural replacement rate would represent the number of POE systems that are sold to replace previously existing systems that have broken, worn out, or for one reason or another have no remaining service life. Theoretically, the replacement rate would be the minimum number of products shipped possible and would assume no new systems were being sold. In order to try and estimate the replacement rate for POE filter and softener systems, it’s first necessary to try and determine how many units are actually out in the field and functioning today. The 2008 WQA Consumer Survey (the most recent year for which data is available) reported that 4.88 million US households have a water softener, which equates to a 4.2 percent US household penetration rate. The survey results claimed a 2-3 percent possible margin of error, but some of us have questioned whether or not there are actually 4.88 million units in the market. Many feel that there are more out there.

According to the WQA Control Valve Shipment Report, our industry has shipped 17,983,105 residentially sized (1-inch inlet or smaller) control valves since reporting began in 1990. If all of these units went into private residences and continued to function without fail (some big assumptions…) the actual household penetration rate would be around 15.5 percent (if POE softeners and filters are combined). Unfortunately, we don’t know how many units have actually failed over the years or how long their useful service life is likely to be – so we can’t calculate with any precision what number of control valves are shipped for replacement purposes. There are numbers available for other consumer durables from which a general comparison can be made, as well as plenty of anecdotal evidence within the water treatment equipment industry.

The retrofit concept
In the appliance industry, a unit that is shipped to replace a previously existing system is called a retrofit. In the US, the percentage of hot water heaters sold for retrofits is above 80 percent. The percentage of clothes washers sold for retrofits is above 50 percent. Since both of these technologies have a greater than 90 percent penetration rate into single family US homes, and have average estimated life spans of 12.9 years (for hot water heaters) and 20.1 years (for clothes washers), it’s a good bet that POE water treatment retrofit rates are nowhere near as high as those for these two types of appliances. Our products appear to be stubbornly lasting longer than the estimated life spans of other consumer durables. Based upon anecdotal discussions and interviews within the industry, the retrofit rate for POE water treatment equipment was probably somewhere around 25 percent in 2010, meaning that a) only about 200,000 POE units are going for retrofits, b) that systems are functioning well beyond the 20 years or so most of us estimate, and that c) the dealer base probably deserves more credit than they normally get for keeping old systems running. In short – POE control valves are unlikely to ever dip below 200,000 shipped per year, but they could be much higher if the industry adopted a planned obsolescence, limited lifespan or scheduled replacement approach – or if dealers stopped servicing existing units so well.

Conclusion and an opportunity
Barring any unforeseen consequences and based upon projections for the household appliance industry, I am predicting that the number of POE residential water treatment control valves shipped in 2011 will be approximately 16 percent greater than the projected volume for 2010. This number is close to the number of systems shipped in 2001 (on the way up to a record high in 2005) and in 2007 (on the way down). Unfortunately the increase in demand is unlikely to bring an increase in margins at any step along the distribution chain. Tight control on costs and receivables will continue to be a priority. The projected growth rate of 16 percent assumes that the replacement rate, or retrofits of existing softeners and filters remains at the current 25 percent. If our industry wants to make 2011 a year to remember and celebrate, it should organize to boost the replacement rate. Any increase in the replacement rate will drive up the overall systems numbers beyond the projected 16 percent. It seems that now is the time for manufacturers, OEMs and dealers to enthusiastically come together to focus and offer incentives for consumers to replace old time clock systems with DIR (demand initiated regeneration) systems. Water savings and brine reduction are big issues right now – getting ahead of regulations in a coordinated manner as an industry to drive replacement rates up would create great economic and environmental benefits. I encourage everyone headed to the WQA Show in San Antonio, TX to think about what the possibilities are. Just think – if California, Arizona and Nevada were to legislate the replacement of time clocks with DIR units over a five-year period, the annual shipments of control valves could rise by 10 percent or more per year in addition to the projected coming growth.

About the Author
Andrew Warnes, former Senior Product Manager and Senior Channel Manager for PRF (a GE / Pentair joint venture) received a Bachelor of Sciences Degree in National Security Policy from Ohio State University and is a former US Army Special Operations Team Chief. His areas of expertise include membrane applications for microbiological purification and regulatory compliance. Warnes is a former International Director of the WQA and serves as a member of the WC&P Technical Review Committee. He can be contacted at (847) 274-0595 or awarnes@comcast.net.