The Capacity of Ion Exchange Resin

Ion exchange 101: defining and measuring capacity
Webster’s Dictionary defines capacity simply as “the ability to do something” or “the maximum number that can be contained.” This is a quantitative value. In ion exchange processes, we define not only the quantitative capacity of the resin (as total capacity), but the qualitative capacity as well (as operating capacity or column capacity). In other words, how much work can the resin do in removing a certain element (contaminant) to a given breakpoint? In the case of a softener for the removal of hardness, we define capacity as the number of ppm or equivalents of hardness a given quantity of resin can remove from a given feed stream at a given flowrate and temperature to a given breakpoint, using a certain level of salt as a regenerant. The ppm of hardness is converted to ppm as CaCO3 and then grains/gallon so the answer is often expressed as kilograins per cubic foot (Kgr/cu ft). A kilograin is equal to 1,000 grains. If you divide the capacity value by the challenge hardness, you get the number of gallons representing the throughput capacity (operating capacity). Example: 24,000 grains capacity per cubic foot challenged with 20 grains per gallon feed: (24,000/20 =) 1,200 gallons.

Operating capacity versus total capacity
Different resins intended for different needs will have different definitions for capacity. The total capacity for a resin is a representation of the total number of exchange sites built into the resin. In the real world, you will never achieve the total capacity because it represents a 100-percent regenerated resin being run to complete exhaustion. Graphically, this is represented in Figure 1. 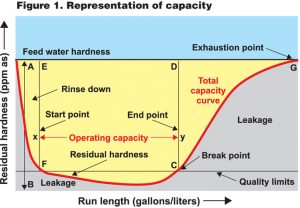 The value shown as line A-B represents the challenge level of ions (hardness) in the feed solution. The red curve represents the residual hardness in the product water. As the run begins, the column rinses down toward the bottom of the yellow area where it crosses the maximum hardness quality line. The run begins. As the graph shows, the process does not remove 100 percent of the ionic challenge. This removal level continues until we approach exhaustion represented by the slight rise in the curve at the point C. The horizontal line at the intersection represents the maximum allowable breakthrough (quality limits line) on the run and defines the operating capacity or run length (the line x-y). As we continue the run, leakage or breakthrough continues to rise after point C until the effluent and the influent are equal (point G). The column is totally exhausted at this point and the total area of the yellow portion of the run above the red curve is the total capacity. The yellow area represented by the rectangle CDEF is the operating capacity.

Total capacity will be the same value regardless of the challenge ions because it represents the total of all exchange sites on the resin. The operating capacity for the resin will be specific to the test conditions, flow, challenge level, degree of regeneration, etc., for the intended installation. This graph shows the total capacity for fully regenerated or new resin while the operating capacity shows what can be expected after several ongoing service cycles. Note: The operating capacity of a softening resin will differ depending upon the ratio of calcium hardness to magnesium hardness because the selectivity ratio of Ca versus Na is higher than that of Mg versus Na. Total capacity is actually determined on a dry-resin basis as meq/dry gm and converted to wet values (meq/mL) based on moisture content of the resin. Tests are typically run with H+/Na+ exchange rather than Ca++/Na for cation.

Conversion to calcium carbonate
Ion exchange systems work by exchanging ions on a one-for-one equivalency basis. How then, can we equate the number of ions in a given weight of one ion to that of another ion of different MW and EW? We have to convert the amount of the element (from the analysis) to a relative number of ions (along the lines of Avagadro’s Number). The convention that is followed is that of converting the element to ppm as calcium carbonate (CaCO3). CaCO3 has a MW of 100 and both the Ca++ and the CO3= are divalent. So the EW of CaCO3 is 50. So far, so good. 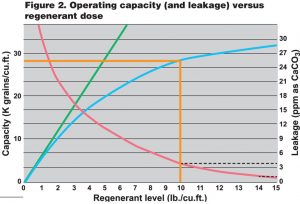 For a softener project, we add the Ca + Mg as CaCO3 to get total ppm of hardness. We then divide this number by 17.1 to convert ppm as CaCO3 to grains per gallon (gpg) in the feed. Then, by taking the resin capacity (in grains per cubic foot [cu ft or ft3]) times the number of cubic feet in the system, we come up with the total system capacity. Example: a 5 cu ft softener regenerated at 10 lbs NaCl/cu ft is determined to have a capacity of 28,000 grains/cu ft (taken from a capacity chart shown in Figure 2). The total system capacity is therefore: 5 x 28,000 = 140,000 grains. If our challenge water is 16 gpg, we calculate the system capacity as 140,000/16 = 8,750 gallons.

Do we set the meter at 8,750 gallons?
Three years from now, after we have put some age on this system, oxidized a bit of resin and backwashed it out of the tank, will the system still treat 8,750 gallons? Perhaps we have developed a bit of fouling with some previously undetected iron. Will the system still have 140,000 grains capacity? Will the feed water still be 16 gpg? Probably not. So we must make allowances. It’s called an engineering factor and for a softener it’s set at 90 percent of the rated capacity. In this case, the 8,750 gallons becomes 7,875 gallons. Depending upon how critical the application might be, we can be more conservative with this engineering safety margin and rate the unit at 75 percent of calculated capacity. For toxic contaminants, such as radium or heavy metals, we might even go as far as 50 percent.

In the real world, we cannot achieve 100-percent efficiency in ion exchange regeneration. The actual recovered capacity for any given level of regenerant is shown as the blue curve in Figure 2. The amount of capacity recovered drops off per pound of salt as the level of salt increases (the laws of diminishing returns). At a level of 10 lbs/cu ft (160 gm/L), the recovery is about 28,000 gr/cu ft or 2,800 gr/lb of salt. The efficiency for this level is 2,800/6,000 (actual over theoretical) or 46.7 percent. By reducing the salt level, the efficiency improves but the quality of the water diminishes as shown by the leakage (red line) curve in Figure 2. In this particular example, the leakage expected for this example is about 3.5 ppm. One of the problems resin suppliers have for supplying regeneration curves is that the recoverable capacity and the leakage will vary with each challenge level of hardness, TDS and the run conditions (flow, temperature and breakpoint).

Figure 2 represents 20 gpg hardness at 70°F, running at 4 gpm/cu ft to a 1-gpg breakpoint from a 450-ppm TDS feed. It should be sufficiently accurate for most projections. Just apply a conservative engineering factor. In designing a water softener or any ion exchange system, the level of regenerant is chosen to give the desired quality and not the desired capacity. We increase the salt to lower the leakage and then work with the resulting capacity. There are various regeneration techniques (such as counter-flow and pulsed flow) that give a better return per pound of salt by lowering the leakage, thus allowing lower salt doses and higher efficiency for the system. Uniform-bead resin and fine-mesh resin will also lean toward higher efficiency (more recovered capacity per pound of salt).

Strong acid and strong base versus weak acid and weak base resins
There are three strong acids (hydrochloric, nitric and sulfuric) and two strong bases (potassium hydroxide and sodium hydroxide). All other acids are weak acids and all other bases are weak bases. We differentiate because strong and weak reagents enter into reactions differently. Likewise, we have strong-acid resins (SAC: resembling the strength and behavior of sulfuric acid) and weak acids (WAC) as well as strong-base resins (SBA: resembling the strength and behavior of sodium hydroxide) and weak-base (WBA) resins. SAC resins are capable of splitting neutral salts. This is shown in Reactions 1 and 2 (using NaCl as neutral salt).
Reaction 1. NaCl + OH+ → ONa+ + HCl. The SAC resin splits the salt into its acid by exchanging the Na for H.
Reaction 2. NaCl + OOH- → OCl- + NaOH. The SBA splits the salt into its base by exchanging Cl for OH.
Weak acid and weak-base resins do not enter into these reactions. They do, however, react with alkaline salts and acids respectively (shown in Reactions 3 and 4).
Reaction 3. NaHCO3 + WH+ → WNa+ + H2CO3 WAC reacts with NaHCO3 (alkaline) but not NaCl (neutral).
Reaction 4. NaCl + HCl + WFB → NaCl + WHCl WBA will adsorb the acid but not split the salt.

In addition to splitting neutral salts, the SAC and SBA resins also enter into Reactions 3 and 4. Therefore, when we measure the capacity of these resins, we must define what that capacity is doing. We refer to the SAC and SBA resins as having salt-splitting capacity and a total capacity, while the WAC and WBA resins have only total capacity, which includes their ability to neutralize an alkali or and acid.

Compounding the understanding is the fact that when weak-acid resins are highly regenerated, they can exhibit a small degree of strong-acid capacity. It is often desirable to kill this capacity with a salt wash to eliminate the inadvertent low pH that can result. Strong-acid resins exhibit only strong-acid functionality. As a result of manufacture or composition, strong-base resins can exhibit a degree of weak-base function. This means that the total capacity is not capable of salt splitting but it is capable of neutralizing acid. Weak-base resins as a rule do not remove weak acids such as carbonic or silicic but will neutralize strong acids (nitric, sulfuric and hydrochloric). Certain weak-base resins (acrylic) can also reduce carbonic acid. Resin capacity, therefore, has to be defined in terms of strong-acid/weak-acid and strong-base/weak-base functions. The simple question “What is the capacity of this resin?” does not have a simple answer.

About the author
C.F. ‘Chubb’ Michaud, MWS is the Technical Director and CEO of Systematix Co. of Buena Park, CA, which he founded in 1982. He has served as chair of several sections, committees and task forces within WQA, is a Past Director and Governor of WQA and currently serves on the PWQA Board, chairing the Technical and Education Committees. Michaud is a member of both the WQA and PWQA Halls of Fame, has been honored with the WQA Award of Merit and is a two-time past recipient of the PWQA Robert Gans Award. Reach him at (714) 522-5453 or AskChubb@aol.com.