Inventions in solid-state lighting, particularly the advancements in white-light LEDs, have been driving the most significant transformation in lighting since the very first introduction of the incandescent light bulb. Headline-making or notable societal impacts of light-emitting diodes (LEDs) include energy-efficiency and environmental benefits. Additionally, the versatility of design options opened up by the compact nature of LEDs has been touted across an array of applications in industries, including consumer, automotive, commercial and industrial.

Similarly, performance improvements in deep-ultraviolet (UVC) LEDs are driving innovation in drinking water disinfection systems as these devices begin to match the economic requirements of POU systems around power, lifetime and price-point. UVC LEDs provide designers with a more effective germicidal light source. As UVC LEDs gain traction in these applications, new challenges have emerged in how to calculate the required power output, as there is not a one-to-one replacement with traditional mercury-based lamps. By understanding the impact of the LED spectral emission on microbe action spectra, engineers can develop highly compact, more durable and effective disinfection systems.

UVC LEDs provide access to the right germicidal wavelengths
In UV disinfection light in the range of 250 to 280 nm is most effective at inactivating the DNA of microorganisms, thereby rendering them unable to reproduce. (Traditionally, POU system designers have relied on low- and medium-pressure mercury arc lamps to access this germicidal range.) Low-pressure mercury lamps emit a single output at 253.7 nm; the total output power of the lamp is equivalent to the output power in the UVC range, albeit at a non-optimal wavelength. Medium-pressure mercury lamps emit a broader range of wavelengths that include the germicidal range, but also unnecessary wavelengths for disinfection purposes (as shown in Figure 1). In fact, only about 20–30 percent of the light is emitted in the UVC range. On the other hand, the continuous spectral response of UVC LEDs is predominantly within the desired UVC range, which allows for a more efficient system.

Figure 1 shows that the low-pressure mercury lamp emission line intersects the typical DNA absorption curve below the peak absorption. Although this is not the optimum germicidal wavelength, there is sufficient emission for DNA inactivation. The emission of the UVC LED delivers more overlap of the most critical wavelengths for disinfection, making it a more efficient light source for these systems. These differences in emission spectra, however, require a new methodology to account for disinfection effectiveness.

Determining the germicidal power of UVC LEDs
As UVC LEDs gain traction in disinfection applications, engineers and product designers need a useful and systematic approach to specifying and comparing useful disinfection power output. In the same way that lumen provides a universal measure of brightness, the most useful specification in these applications is the power output that is useful for inactivating pathogens. This is known as the germicidal power. The most accurate method to specify germicidal power involves first knowing the specific pathogen to be inactivated and then its action spectrum (i.e., the pathogen’s unique profile of sensitivity by wavelength to a light-source). Once the action spectrum is determined for the pathogen (or in some cases a cocktail of pathogens) of particular relevance, the cross product of those spectra with the emission spectra of the particular light source is the germicidal power of the light source. 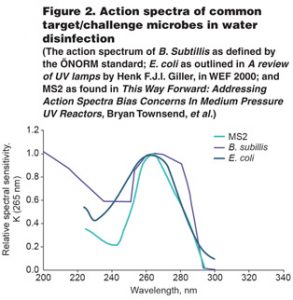 Differences in wavelength susceptibility
The susceptibility of a pathogen to UVC energy varies; however, their peak is generally understood to be 265 nm. Figure 2 shows the action spectra for three common target or challenge pathogens used in water disinfection systems.

Although these pathogens all present peak absorption at roughly 265 nm, there is variation in the sensitivity to discrete wavelengths. Table 1 illustrates this difference in wavelength susceptibility based on their spectral sensitivity. 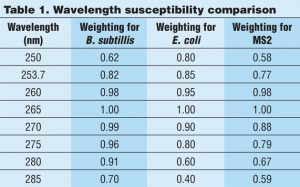 By multiplying the emission of UVC diodes by the weighting, one can determine the power output in terms of the power available for disinfection for this specific pathogen. This multiplication of the two emission curves, or convolution, provides the germicidal power value for the light source.

Application of germicidal power for commercial production
As applications for UVC LEDs expand, the number of providers will increase. This will offer more choices for OEMs, but also variation in provider product specifications. Throughout product development or design, it may be the engineer’s preference to observe each spectrum of an individual light source in order to determine optimum benchmark performance criteria. High-volume manufacturers, however, are requesting a more systematic approach for specification of germicidal output power. This approach of convolution (i.e., normalizing LED output in terms of germicidal power) has that desired effect. 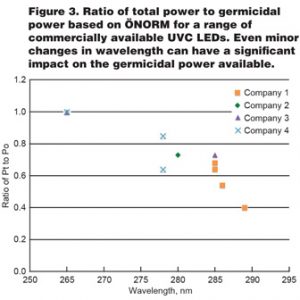 Figure 3 shows a number of UVC LEDs plotted by their germicidal to total power ratio (based on B. subtillis as defined by the ÖNORM standard). While the total diode power output (Pt) is the same from each provider, the different peak wavelengths of the diodes result in a large distribution in germicidal power. This could mean that an equivalent powered diode at 285 nm from one supplier would provide only 40 to 50 percent of the germicidal effect of a 265-nm device from a second supplier. Figure 3 also highlights the inconsistency in germicidal effect as diodes stray away from the peak absorption of DNA (265 nm). This could be the difference between meeting dosage requirements for safe drinking water and leaving active pathogens in the drinking water to infect customers.

Conclusion
While complex microbiological systems have no single approach that fits all needs, this is a step forward in simplification that allows the engineer to create reasonable designs for manufacturability. High-performance UVC LEDs are allowing manufacturers to migrate from mercury lamps to solid-state lighting solutions. The higher efficiency in the germicidal wavelengths and compact footprint of UVC LEDs allows for more effective disinfection systems. With the ability to produce a reduction of more than 99.99 percent in pathogens, UVC LEDs have proven effectiveness in water disinfection. There is little question that these light sources are a viable alternative to traditional methods and will continue to trend in innovative new designs.

About the author
Rajul Randive, Director of Application Engineering at Crystal IS, is responsible for designing, building and testing various prototype applications that use Crystal IS UVC LEDs. He works closely with customers to develop applications and maps those to engineering requirements that result in a market-ready product. Randive also ensures test protocols meet customer specifications. With more than 20 years experience with UV application development, he is a frequent industry author and presenter. Randive is a voting member on the ASHRAE Committee for Guidelines for the application of ultraviolet germicidal devices to control the transmission of airborne pathogens. He also holds a patent for a high-throughput vaporizer (Patent #6789789). Randive earned his MBA from the State University of New York at Albany as well as a PhD in organic chemistry and an MS Degree in chemistry from Clarkson University, Potsdam, New York.