Water Treatment—An Enigma of Its Own, Part 2

In Part 1, I addressed the wild claims and nonsensical science behind PWCs designed for scale control. This article is devoted to other water quality improvement claims of these and other PWCs. These claims include disinfection or microorganism reduction, biofilm prevention/removal, TDS reduction, change in water viscosity and many others. The devices employ such physical operations as vortex action (swirling of water in a circular pattern—see Figure 1), pumping water through an orifice to produce cavitation, as well as the magnetic and electrical actions described in Part 1 and others. 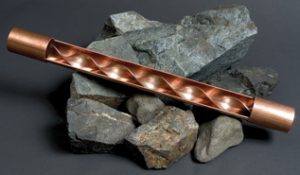 Another manufacturer offers a disinfection resin technology utilizing two layers of metal/metal oxides that are claimed to pull the electrons out of microorganisms, thus killing them. The aggregate layers supposedly discharge electrons to a lower layer, which then allows the upper layer to remove electrons from microorganisms. Such terms as micron-accurate, arrangement of surface deposits, catalytic behavior, cationic surface state and electronic discharge of surface cations contribute to the mystery. The manufacturer references testing against BS EN1276, a UK standard for chemical disinfectants to meet food hygiene legislative requirements for bacteria inactivation. They claim testing by several institutions, including US EPA. Interestingly, this product does not appear to have been tested against NSF/ANSI Protocol P231, which includes removal/inactivation requirements for protozoan cysts and viruses, as well as bacteria. Also, it is unclear how US EPA can run performance tests for any manufacturer, particularly against a non-US EPA standard.

Yet another manufacturer has an electronic device to be attached to an irrigation line, claiming that it alters the hydrogen content, thus stimulating photosynthesis and increasing plant growth by 25 percent. No third-party test data appear to be available. One product supposedly utilizes an electrolytic cell to not only kill all bacterial, parasitic and viral organisms, but to render heavy metals inert and neutral, and to shatter and break down synthetic organic compounds. All are absent of any comprehensive, credible test data. A company marketing another electrolytic product claims that it produces hydroxyl ions and atomic oxygen in gas form to oxidize water. This is chemically impossible!

Some magnetic device manufacturers assert that water molecules are affected by magnetic fields. Examples of their scientific-sounding nonsense include:

An excellent compendium of references to many of these devices and their unbelievable claims can be found at www.chem1.com. This comprehensive website is the work of Stephen Lower, PhD, Professor Emeritus at Simon Fraser University, Burnaby, Vancouver, Canada.

Proven technologies—TDS reduction
Having given some examples of pseudoscientific mind mush, based on crackpot chemistry, it might be appropriate to address some of the TDS reduction technologies that utilize real chemistry and actually do work. RO membrane technology has been on the market since the early 60s and is now the primary technology selection for salts reduction. So why is RO (or NF) not an ideal residential water softening choice?

The answer is that it is fundamentally a continuous process. This technology will produce a specific flowrate of treated water (permeate) based on pressure, temperature and other design details; it cannot be varied by adjusting flowrate. For the variable water flowrate requirements of residential applications, the permeate would have to be collected in a product tank, equipped with a pressure-activated distribution pump.

Ion exchange technologies have been around for what seems like forever, with many choices of resins available for numerous, diverse applications. These adsorptive resins can be engineered to meet specific requirements, ranging from softening to high-pressure boiler feed and they are tried-and-true treatment choices. In contrast to membrane technologies, resin-based technologies allow flow adjustability.

Another TDS reduction technology, capacitive deionization (CDI), has been under development for several years. It utilizes porous electrodes connected to low-voltage DC power (1.4 to 1.6 volts). Ions are attracted to the appropriate electrode and when each electrode is saturated, the polarity is reversed, releasing the captured ions to drain. It is claimed that CDI can operate at a minimum of 80-percent recovery (treated water volume divided by feed water volume) at a low operating cost and requires no chemicals. Many of the leading softener manufacturers have attempted to commercialize CDI. Even though it is based on proven scientific principles, wide acceptance has been elusive. A cost issue, perhaps?

Performance validation
So how can you determine if a PWC works or not? With few exceptions, there are now very comprehensive, performance-validation test protocols available that will indicate whether (and how well) a device will improve water quality. If there are no test data available to validate a particular claim, insist on documentation detailing scientifically credible, third-party testing by a respected institution or laboratory with impeccable credentials. For example, NSF International is a company that writes performance standards prepared by task forces comprised of objective, qualified experts. It also tests products against a specific standard and publicly lists them.

If the sales literature references an NSF standard, make sure it matches the claim. One product on the market is making sweeping disinfection claims, but only references NSF/ANSI 42 filtration validation, an aesthetic standard that does not address health-related contaminants.

The important questions to be answered are:

Some manufacturers of these questionable products and technologies even make the impossible claim that their technology changes the bond angle between the hydrogen atoms in the water molecule. This supposedly imparts miraculous properties.

Conclusion
In this fascinating field of water treatment, there are constant surprises for us: new discoveries and explanations, better understanding, amazing technologies. But it all must be governed by the fundamental laws of chemistry and physics. Embrace the excitement that our industry provides, but be diligent and rigorous; question, investigate and analyze. The consumer is depending on you to be knowledgeable, honest and ethical. Use your knowledge to answer his or her questions to the best of your ability, but don’t give in to the temptation to out-lie the liars. If you don’t know the answer, don’t make something up. Find out and then get back with the answer. We have many objective, qualified experts and organizations that want to educate and improve the water treatment industry in general and you, in particular. Take advantage of our collective knowledge.

Peter S. Cartwright, PE, Master Water Specilaist, is President of Cartwright Consulting Company. He has been in the water treatment industry since 1974, has authored over 300 articles, presented over 300 lectures in conferences around the world and has been awarded three patents. Cartwright has chaired several WQA committees and task forces and has received the organization’s Award of Merit. A member of WC&P Technical Review Committee since 1996, his expertise includes high-technology separation processes such as RO, UF, MF, UF electrodialysis, deionization, carbon adsorption, ozonation and distillation. Cartwright is also Technical Consultant to the Canadian Water Quality Association. He can be reached at: (952) 854-4911; fax (952) 854-6964; pscartwright@msn.com or www.cartwright-consulting.com