‘On the Cusp of Quantum Growth’ 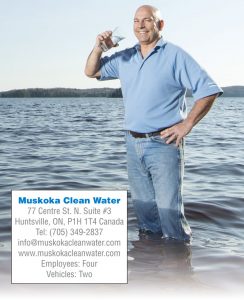 Jon Armstrong worked in the automotive industry for 30 years, ultimately running his own company with three other full-time mechanics. Then this native of Canada decided to sell the business and look for something less stressful. “The water treatment business came my way almost accidentally. I took a job as an installation tech for a water treatment company and started to learn all about water treatment.

“It was not long before I realized the water in my locale was in fact quite different than that of my employer’s area an hour away and the ‘go-to’ systems he used were not the best applications for my region. Before I knew it, I was self-employed again.” He opened Muskoka Clean Water in 2009 in Huntsville, the gateway to Algonquin Provincial Park, 130 miles (215 kilometers) north of Toronto, in Ontario, Canada.

“I decided that I wanted to know more and embarked on what I call a ‘university-of-life’ program in which I read a lot, talked to lots of people about their different areas and the water and treatments they used, and tried and failed a good number of times. After climbing up the steep and slippery learning curve, I realized I loved the challenge of helping a customer have great-tasting and safe drinking water.”

At the time, Armstrong was “one man and a van.” He built the company by solving customers’ water problems in a region with numerous well, river and lake water systems. Today a high percentage of business comes from repeat customers and referrals. “We deal with iron, tannin, unbalanced pH levels, hard water and sulfur smells, to mention a few of the common problems in this region.” To meet this broad range of problems, the staff has grown to include his wife, Laurene, as part-time bookkeeper; son-in-law Scott Smith, who does installations and service and Office Manager Jan Provence, who also does water testing and service estimates. “We have a service business, a retail store and a small but growing distribution division,” Armstrong said.

“I believe the automotive trade experience has been more valuable to me than any trade I could have been in, especially for understanding hydraulics and pressure. With this mechanical background, we fix every kind of valve out there. We can unscrew it and understand how it works. We can take things apart and put them together. We can go into a home with a water treatment system that we did not install and fix it. Our customers appreciate that.”

Popular Muskoka tourist area
“We serve mostly residential customers, including seasonal waterfront ‘cottage’ owners, as well as resorts, government-regulated camps and other sites,” said Armstrong. “We have found a niche, working with their operators. We are in an area where hockey players and movie stars from Canada and the US come to play and their homes have quite extravagant water systems. These customers want the same quality water they get when they turn on the tap in the city—and we are very good with lake water systems. This area is known for its tea-colored water and the tannins are difficult to remove, so we have developed a filter that is very effective for tannin removal.

When Armstrong started planning this family-owned business, “the most frustrating challenge was finding training and education.” Seven years later, he’s even more passionate about the water industry. “I find myself excited to be a part of an industry that I believe is on the cusp of quantum growth. To effectively and profitably control that growth, however, I would like to see our industry become regulated with minimum standards and continuing education made a mandatory component of that regulation.

“As active members of both the Canadian WQA and the WQA, my staff and I have taken Canadian WQA courses and will continue to do so. CWQA and WQA designations are very similar, with the Canadian content being added to the core US content. Our goal is for everyone to achieve master’s-level qualifications by the end of 2016. Scott and I have also taken pump and well courses, as it is important to understand every aspect of water supply and treatment. Jan is a qualified small-system operator, so we have staff that also understands Ontario regulations for small systems.

“I was in Florida on holiday in 2014 and I found out there was a WQA convention in Orlando. My timing was lousy. I had to drive home, but two days later flew back. It just amazed me what was there. I’d never seen anything so big with so much information all in one spot. Then this year, three of us went to WQA in Nashville and came back with our heads floating.”

At the Orlando convention, Armstrong struck up a conversation with Jerry Bechtold, owner of Automated Pure Water in Vero Beach, FL. “We use hydrogen peroxide for treating heavy iron and Jerry had a static chemical-mixing system inside a tank. We couldn’t get that product in Canada and I really wanted to try it. So I ordered a couple and they worked incredibly well. It changed the way we do a hydrogen peroxide system.”

Import from Florida, assemble in Canada
The downside was the cost which was ridiculous after shipping was included, the Canadian exchange rate calculated and other factors were considered. Bechtold and Armstrong worked out a deal. “We now assemble chemical-mixing tanks with parts purchased here in Canada and some parts imported from the US. This saves having to pay higher shipping and duty costs and allows us to give a better price to our customers. We can also distribute assembled tanks to other treatment companies. We hope to expand our offering to them, as we discover more items that are not available here through our colleagues in Florida. While being a distributor of industry-related goods is not a huge part of our current plan, it is both a growth opportunity and a service to our industry.”

Armstrong is now considering a southern division in Fort Myers, FL. One reason is the population. Armstrong said, “The entire country of Canada has a population of 33 million people. The state of Florida has a population of nearly 19 million. Our service area in Canada includes 20,000 customers in Huntsville and a total of maybe 70,000 in the surrounding service area. In the same 90-minute drive from Fort Myers, the population does not end. There is a huge demographic difference. It is much easier to build a business there. Besides, I like the heat.”

“Sadly, water (one of our most important resources) is being more and more adversely impacted by humanity. It is no longer simply the naturally occurring contaminants we need to be concerned about but a plethora of man-made pollutants. As a result, there are new technologies being developed from better and more efficient raw materials, as well as new things like LED UV systems. Without industry-wide mandatory education and continuous learning, how can we ever be well-informed and give good service to our customers?”