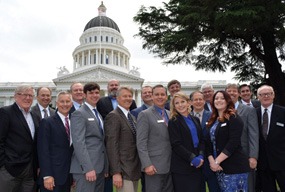 The PWQA Annual Legislative Days was held April 11-12 in Sacramento, CA, with a delegation of 23 volunteers who met with more than 85 senators and assembly members at the state capitol. The association also hosted a reception to present Assembly Member Eduardo Garcia (D-Coachella) with its Legislator of the Year Award for his work in promoting the use of POU/POE devices to provide safe, clean drinking water to small communities. Guest speakers were Assemblyman Bill Dodd (D-Napa, Past President of WQA and PWQA), Mark J. Bartson, CA State Water Resources Control Board and Bob Reeb, Legislative Advocate for the Alta Irrigation District. In May, PWQA and WQA endorsed State Assemblyman Bill Dodd (D-Napa) for Senate District 3. He is a former member and Past President of both organizations who owned and operated his own small business (Diversified Water Systems) for over 25 years. The business included four Culligan Water franchises. Take note of the upcoming Annual PWQA Summer BBQ , which will be held July 21 at Performance Water Products Inc., 6902 Aragon Circle, Buena Park, CA. The event will include lunch and an industry update. RSVP to info@pwqa.org or (760) 644-7348.