The Art of the Recycle, Part 1: The Challenge of the ‘Yuck Factor’ 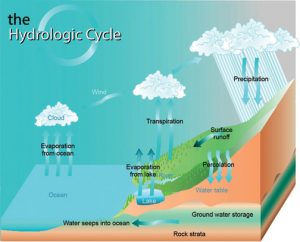 Mother Nature should receive the Nobel Prize in chemistry for developing the most effective and efficient water reclamation and recycling process on the planet. She does this with no emissions and a zero carbon footprint, to the tune of 245 billion gallons per minute on a 24/7 basis—enough purified water to deliver 50,000 gallons every single day to every person on the Earth. She does this with no out-of-pocket costs to the consumer. She obeys every law (of nature). You see…there are laws of nature she cannot violate because she wrote them. Energy and matter can neither be created nor destroyed. This law is followed through the Hydrologic Cycle. She uses distillation as her process of choice. Unlike filtration, distillation removes the water from the waste instead of the waste from the water. That way she doesn’t have to remove all of the water but that which she does remove is the purest on the planet and it’s free for the taking (more or less). That deserves a special prize.

Clean water is not an infinite resource
Despite its abundance, clean water is not an infinite resource. Water is, indeed, plentiful but clean water is not. According to the World Water Council, over 1.1 billion people live without clean drinking water and 2.6 billion lack sanitation. Millions die every year from waterborne disease and many millions more from starvation for lack of water to grow food. Climate change (drier) and population growth (increasing) are fueling the problem and that will only get worse. The options are now dwindling and the cost for new resources are very high.

Historically, civilizations developed around water resources such as lakes and rivers. Then the supplies were augmented by building dams and pipelines for the transfer of water from more plentiful sources to points of need. More recently, nations have turned to seawater desalination to produce potable water for the masses that would rather live in locations with warmer and drier climates.

Cutting back
In the US, southwestern states (including California, Arizona and Nevada) have been facing drought conditions for most of the past decade and no relief is in the forecast. Although the annual snow pack has been favorable for 2015-2016, the available supply is still limited to only about 50 percent of the demand. How well are these areas coping? Per capita water consumption for residential use runs about 124 gpd for California with Arizona at 140 gpd and Nevada topping out at 190 gpd (KQED.org Public Media). Although California Governor Jerry Brown mandated a 20-percent cutback in water usage for residential needs, most communities are reporting a 10-15-percent reduction. Arizona and Nevada have been hit even harder. Lake Mead, which supplies about half of Arizona’s water and nearly all for southern Nevada, is so low that should the drought continue even for a few more years, Nevada and Arizona could be cut off from this crucial water source.

Eighty percent of the Colorado River is diverted for agricultural needs and water rights that go back over a hundred years, creating a potential water war that the homeowner will not win. Higher water productivity (more intelligent use and recycle) is about the only answer (more in Part 2). US EPA estimates that the average home loses 13.7 percent of its total water consumption through leaks. That works out to about 55 gallons/day/home. Since this only amounts to an economic loss of $0.25/day, the consumer has little incentive to make repairs.

Substituting
Municipalities have been using processed wastewater for landscape irrigation of public parks and golf courses, cooling towers, hydraulic fracking and non-potable water needs for years. Los Angeles, CA, has been providing treated wastewater for this purpose since 1929.3

Reusing water is not new. On the municipal scale, this form of reuse requires a dual-piping delivery system, which is often seen as prohibitive in some communities. Graywater recycling is growing in residential areas and planned communities, whereby household discharge (minus the toilet and garbage disposal) is reused, as is, for toilet flushing and irrigation. Graywater recycle can cut household requirements as much as 50 percent. Some residential and industrial needs for water only require the water be used as a carrier. Hong Kong has a dual piping system that delivers seawater for flushing toilets to over 80 percent of its seven million residents. [A triple system evolved at its airport where sea, fresh and treated water are delivered in separate systems for specific uses, reducing the use of municipal water by 50 percent.(2)] The US is trailing many other countries in this regard. Much more could be done to preserve dwindling freshwater supplies, even if only limited to regional issues (more in Part 2).

Upgrading through treatment
“Would a rose by any other name still smell as sweet?” (Shakespeare). The ultimate in water productivity is to be able to take water, any water, and treat it to a standard, any standard, and utilize it for any need. This includes treating blackwater from sewage treatment plants all the way to potable water standards and reintroducing it to supplement the potable water supply. This is not yet widely practiced in the US but the technology to do so is certainly well-known and done elsewhere. For example, Windhoek, Nambia has processed domestic sewage into potable water for human consumption since the late 1960s with no obvious adverse health effects; Singapore uses treated sewage on a large scale. Such recycling reduces the local needs for precious fresh water consumption and improves water productivity. The granddaddy of all reclamation plants is Plant #21 in Fountain Valley, CA, which treats municipal sewage and returns 100 million gallons of high-purity water to the local aquifer on a daily basis. This is called a groundwater replenishment plant, which is seemingly more appetizing than a sewage treatment plant. Upgrading can also include rainwater catchment—again, a better sounding name than street drainage or runoff. Rainwater is not pure water and should be treated as graywater, but can be readily upgraded though treatment.

The yuck factor
The most intriguing method of improving water productivity is the complete recycle for reuse of wastewater. It is a captive source. Primary and secondary treatment is already done. The water can undergo a tertiary refining with nano-filtration to remove pathogens and bacteria; RO to remove salts and organics and peroxidation (peroxide plus UV oxidation) to reduce any residual pharmaceuticals and pyrogens. Water treated in this manner is purer than any other water source known for municipal supply, a no-brainer with one exception: the public doesn’t buy it. It’s called the yuck factor, which is a real phobia among critics. Psychologically, there are folks who believe that once water touches something, it is forever contaminated by that something. These people far outnumber the more knowledgeable people in our industry who know the technology exists for safe and economical recycling. For the skeptics, I have one question: “Where do you think Las Vegas dumps the waste from its sewage treatment plant?” You have been drinking recycled water all of your life. The technology to recycle sewage is well-known and widely practiced. Get over it (more in Part 2).

Overcoming the yuck factor
The bar chart is the result of a poll showing > 60 percent of those asked would not want to even consider recycled water for consumption. Public education and proper news spin, however, have proven to be very effective for gaining public acceptance of the ‘toilet-to-tap’ concept. In San Diego, CA, a poll taken in 2004 found that 63 percent of the public opposed the reuse concept. The public was given the facts about water recycle and safety and the topic was given the spin that it was ‘toilet to treatment to treatment to tap.’ A similar poll in 2011 showed those opposed to the system had dropped to only 25 percent. Sometimes there’s just not a lot of choice after all.

Conclusion
Increasing water productivity means getting the most from a limited resource. Not all water leaving the supply plant needs to be potable quality. Municipalities are quietly proceeding with water-recycling programs under a variety of new names and schemes for a variety of uses so as not to lose the public trust. Indirect recycling and groundwater replenishment, implying that the treated water does not end up directly back in your pipes, seems to work the best. Expanding the efforts to return used water in place of new water, along with the capture and treatment of street runoff, will give an almost infinite boost to the availability of municipal supplies. Water is water. It can be recycled indefinitely. In Part 2 of this series, we will present  Science of Water and the Art of Recycling.

C.F. ‘Chubb’ Michaud, Master Water Specilaist is the Technical Director and CEO of Systematix Company of Buena Park, CA, which he founded in 1982. He has served as chair of several sections, committees and task forces within WQA, is a Past Director and Governor of WQA and currently serves on the PWQA Board, chairing the Technical and Education Committees. Michaud is a proud member of both the WQA and PWQA Halls of Fame, has been honored with the WQA Award of Merit and is a two-time past recipient of the PWQA Robert Gans Award. He can be reached at (714) 522-5453 or via email at AskChubb@aol.com.