Introduction
POU/POE devices with different media provide a drinking water final filter for many different applications. Taste, odor, color and toxic organics are best removed with activated carbon (AC) filtration. Coconut shell feedstock takes 90,000 nuts to make one ton of activated carbon, which is most often used in POU/POE and municipal filters. This article presents proof of concept that coconut-like or better pore structure can be made from lignin, a material available in agricultural waste. Some of this information has previously been presented at major carbon conferences1-4 to develop interest in this new technology.

What is lignin and what are its sources?
Lignin is the second most abundant naturally occurring sustainable organic compound after cellulose. When one looks at trees, waste in a corn field, lawn clippings or other agricultural wastes, it is important to realize that these materials contain 20 to 35 percent lignin by weight. The chemical structure for lignin is illustrated in Figure 1. This material has many aromatic rings that are ideal for manufacturing a large family of activated carbon products in the near future. The code for a natural product is embedded in a section of DNA called a genome. Thus, a diverse number of varieties are possible. Opportunities exist to manipulate the final lignin structure through modification of the DNA genetic code. Lignin presently is a low-quality, low-value material. Overall, lignin represents a $300 million (USD) per-year business as a low-value additive for concrete and as a surfactant. The total availability of lignin in the biosphere exceeds 300 billion tons annually with a projected 20-percent annual growth rate. Most of it is burned for heat. Also there is enough lignin to support its role as a major feedstock to manufacture activated carbon.

Activated carbon mature manufacturing processes
Two major manufacturing processes, thermal and chemical, are used to produce activated carbon stocks. The thermal process is the less expensive of the two because it does not require the addition of chemicals. Typical chemicals used in the chemical activation process are phosphoric acid and zinc trichloride treated with sodium hydroxide. With the chemical activation process, one is never really certain that all of the chemicals are removed completely from the activated product at the conclusion of the activation process. Often, they are water-washed to remove residues, which also drives up product cost.

The thermal process typically consists of two steps. The first is a relatively low-temperature (240° to 310°C) procedure that is devoid of oxygen (and produces char), called carbonization. The second step, activation, is carried out at a temperature of 800° to 950°C with 15-psi steam. This step develops fine pore structure in the relatively non-porous char. This chemical process deserves evaluation because it may offer an enhancement in activated product yield of as much as two- to threefold over the thermal activation process. Other lignin sources from pulp and paper manufacturing should also be evaluated as AC feedstocks. 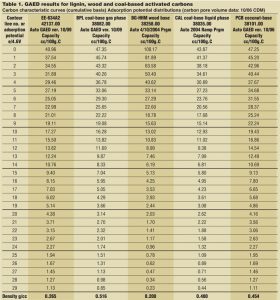 Results and discussion
A recent major discovery involves finding a way to effectively convert lignin to char. Many scientists have observed that heating lignin resulted in melting, foaming and fusion, which resulted in a poor char product that does not make a good activated carbon. One company’s prior experience with coal family members enabled development of a char process that eliminated this manufacturing barrier. Char was activated with 15-psi steam at 850°C in a custom laboratory rotary kiln that simulates commercial rotary kilns. (AC manufactured in a lab-sized kiln typically provides better product at commercial scale, although commercial-sized kilns are better at eliminating oxygen from the process, thus avoiding complete combustion of feedstock to ash. Commercial kilns also provide more precise temperature control than a laboratory kiln.) The Polyani adsorption potential energy theory for physical adsorption by heterogeneous adsorbents was used to define the 1075 iodine adsorption spaces.

The data in Table 1 represent a comparison between lignin and the present dominant feedstocks of wood, coal and coconut. It is interesting to note that if AC is made from wood, we obtain a different carbon structure compared to AC made from a major isolated chemical in wood lignin feedstock. Lignin provides a more valuable (as much as two to three times greater) coconut-like AC structure as compared to wood. It is very important to note differences in density (grams per milliliter) in the last row of data in Table 1 that leads to proposed pictorial adsorption space structures in Figure 2. Spacings between platelets are larger in wood than coconut. Tight graphitic platelet spacings provide high-adsorption energy sites, which are needed to remove trace organic concentrations of small molecules (such as THMs) from drinking water. Note that wood-based carbon has relatively small graphitic platelets compared to coconut carbon.

An obvious weakness for lignin activated carbon is hardness, which turns out to be a strength. Coconut-shell based carbon is the hardest, which is the reason it is used in gold mining where hardness is very important. Lignin AC, on the other hand, is best used as a powder. It should be possible to compress lignin powdered AC into hard granular and pelletized AC forms to increase its density for additional applications. Keep in mind there are many advantages of fine powders over the large carbon forms. Small powdered AC (PAC) particles remove contaminants faster and have higher contaminant loading capacities and more powdered carbon is sold globally than granular or pellet. Lignin powdered AC is expected to be a superior low-ash product compared to present powdered activated carbons in marketplaces sensitive to water leaching ash.

About the authors
Henry Nowicki, PhD/MBA is President and Senior Scientist at PACS Activated Carbon Services. He regularly provides a two-day short course, Activated Carbon Principles, Practices, and Opportunities. Nowicki may be reached through www.pacslabs.com, by telephone at PACS Activated Carbon Services (724) 457-6576, or email, henry@pacslabs.com. Charles Carr, BS has 26 years of experience as an activated carbon specialist. He may be contacted at PACS. Richard Capp, BA has a decade of experience in analytical and environmental chemistry associated with activated carbon and 17 years of experience with computer operating systems, networking and applications for financial institutions. He also may be contacted at PACS.

About PACS Activated Carbon Services
PACS has provided a wide and deep service menu for the global activated carbon industry for 33 years. Please see www.pacslabs.com for a list of services. PACS will host the 38th and 39th International Activated Carbon Conferences (IACC) in Pittsburgh September, 2016 and Orlando February, 2017.