A Comparison Study of Activated Carbon Blocks for POU/POE Applications 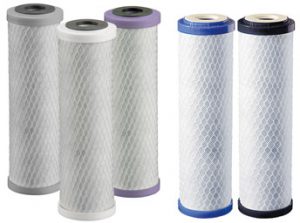 • Prefiltration before RO membranes for reducing active chlorine, organics, particulates and colloids (including rust), which may plug up and/or damage RO membranes

• Postfiltration after RO for reducing the amount of small, mostly organic molecules not removed by RO membranes and elimination of unpleasant taste and odors (mostly organic in nature) leaching into water from the material of the RO permeate water tank 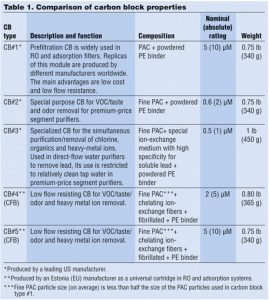 Carbon blocks are made by either compression molding or extruding a mixture of PAC and powdered polyethylene. Inherently adhesive high molecular-weight polyethylene particles soften, start to melt and bind PAC particles into a matrix. Additional capabilities (such as lead removal) are achieved by adding specialized adsorbents (e.g., activated alumina) to the mixture. Because of the relatively high processing temperature, many water purification materials (e.g., ion-exchange resin) cannot be used. Properties of the carbon blocks may be varied by changing the particular size distribution of the PAC and degree of compression during the formation process. (Carbon blocks have somewhat less adsorptive capacity than GAC because the adhesive [PE] occupies some of the sites.) 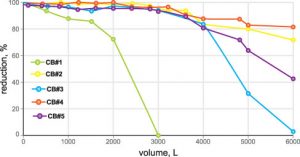 Study details
Comparative testing was conducted according to NSF/ANSI-42/53 standards protocols. General test water was prefiltered through a 5-micron absolute-rating filter (temperature 20 ± 2°C; pH 7.5 ± 0.5; turbidity < 1 NTU; TDS 300 ± 100 ppm; hardness 50 ppm). Test conditions included flowrate of 1.5 L/m, based upon 50-percent on/50 percent off with a 20-minute cycle, 16 hours per day, followed by an eight-hour rest period, under pressure. For the influent challenge, general test water was spiked with appropriate contaminants to obtain influent challenge solutions with contaminant concentrations recommended by NSF/ANSI-42/53. Tests were conducted against: 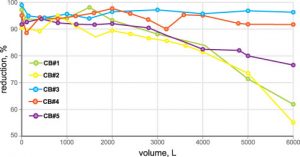 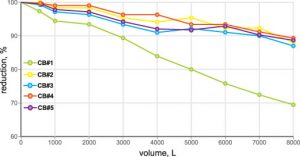 In the preparation procedure, before testing, filtration cartridges were flushed with tap water according to the operation manual requirements. Sampling points were 1, 100, 500 liters and each 500th liter (for VOC testing sampling points at 1, 100 and each 100th liter). Temperature, pH, turbidity and differential pressure (Figure 6) were also the subject of constant monitoring. 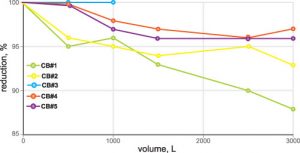 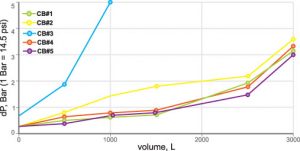 Because of the tortuous water path and generally hydrophobic nature of the carbon blocks, dirt particles plug up both the porous carbon block matrix pores and its outer surface, leading to the premature end of the carbon block’s useful life (versus its theoretical adsorption capacity).

Carbon fiber blocks (CFB) 4 and 5 also contain hydrophilic chelating (selective affinity toward heavy-metal ions) ion-exchange fibers 10 to 20 microns in diameter (Figure 7). The fibers are much longer than the AC and binder particles and provide uninterrupted flow paths matrix for the water. 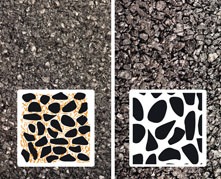 The major difference between the same diameter hydrophilic fibers and particles is that an adsorption bed composed of fibers offers negligible flow resistance to fluids; the same adsorption bed composed of the same diameter particles has high-flow resistance. Water likes to flow along the hydrophilic fibers and its flow is also assisted by the capillary suction. 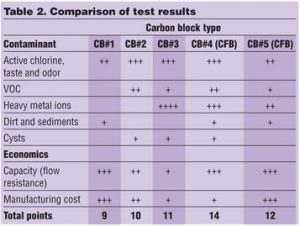 Conclusion
Carbon blocks can replace GAC in POU applications due to their superior kinetics and lower flow resistance. In turn, AC fiber blocks were found to be superior in the combination of the adsorption capacities and flow resistance as compared to the other carbon blocks.

About the authors
Alexey Aksenov is Senior Research Chemist of WestAqua Ou, Aquaphor Group, Narva Estonia. He is a graduate of the St.Petersburg State Institute of Technology, Electrochemistry Department. Askenov can be reached at alexey.aksenov@aquaphor.com.

Alexander Mitilineos, Head of R&D Chemistry Dept. of WestAqua Ou, Aquaphor Group, Narva Estonia, is a graduate of the St.Peterburg State University, Inorganic Chemistry Department. He can be reached at alexander.mitilineos@aquaphor.com.

Joseph L. Shmidt, CEO of Aquaphor Group, was also co-Founder of Membrex, Inc. (now a part of Osmonics, GE Water). He earned his PhD and MS Degrees in chemical engineering from Columbia University, NYC. Dr. Shmidt can be reached at joseph@aquaphor.com.