A conversation with Richard Mest about final barrier
Richard Mest, former WQA president, is President of Master Water Conditioning Corp., Pottstown PA. Well-known in the industry as an educator and writer, Mest introduced the Final Barrier concept at the annual WQA conference in 2013. I met with Mest at the recent WQA show in Nashville, TN to discuss what progress is being made with the final barrier approach.

Martin: Is there a disconnect in consumer and dealer understanding of the final barrier concept?
Mest: I wouldn’t call it a disconnect. Change is always challenging. Dealers sort of get the concept because, after all, they have been practicing it all along! But many of them don’t see how final barrier translates into profitable commerce for them. For example, they distrust a centralized program that would involve a municipality purchasing POU units for the community water system, then hiring local dealers with the necessary skill set to install them. With the product sale taken away from them, many dealers would have little or no interest in participating in such a program.

As a former president of WQA and longtime advocate of final barrier, I get to represent the industry in Washington, DC before legislators and regulators. In a sense, the Flint water disaster is a gift to our industry. It demonstrates that our products can be a part of the solution to their severe lead contamination problem. And, perhaps more important, if they had been proactive, we could have prevented the consequences suffered by Flint residents. At the end of day, final barrier is getting us and our certified member professionals recognized as a solution. That’s really where we are spending our energy.

Martin: What’s the path going forward?
Mest: We need to advance our wherewithal with the regulators and legislators. If we continue to pursue this goal and intensify balanced pressure, I think it will be a win-win situation for all of us. Also, as an association, WQA needs to be accepting of change and product innovation, but never compromise the principle that it must be allied with proven science. In dealing with new science, there needs to be more than just testimonial evidence of its efficacy. The legislators and regulators I speak with are glad to hear this.

Martin: How important is the ‘green’ concept?
Mest: With final barrier, we’re very concerned about ‘green.’ We’re stewards of the environment so we’re speaking the same language as the regulators, including sustainability certification. But, at the same time, we understand our limitations. We are pursuing a low carbon footprint and zero discharge with no chemical additives, with the best available technology. And we have a lot of science and research chasing that. So the regulators have to know that we have the same visions they do. But you can’t hold us back because you may not like some of the technology we use, when there is nothing better.

Martin: Do the words final barrier mean anything to consumers?
Mest: As you stated, the words are very powerful. We don’t need to change the brand, but we can repackage the message to suit the audience. WQA has gone through multiple versions of the message. I would encourage dealers to use final barrier in their sales presentations and to use it repeatedly. That way, it will resonate with a dealers’ sales teams and with the customers. Final barrier can be seen as the conclusion of the water treatment solutions dealers provide. Even the refrigerator water filter is a final barrier application.

Martin: Is final barrier more than just another term for point of use?
Mest: The final barrier is simply a water treatment device that treats the water at the point of end-use. I describe it as providing the right water quality, in the right place, at the right time. There’s a maze of possible solutions available for water problems. Consumers need an expert to lead them through the maze and to help them identify the right solution for their specific problem. That’s where the certified water treatment professional comes in. 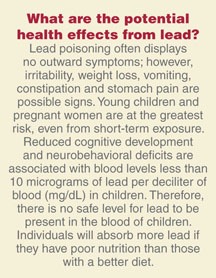 Overview of the Flint water crisis
Otto Schwake, PhD, of Virginia Polytechnical Institute in Blacksburg, VA, the microbiologist investiging the Flint, MI lead contamination crisis, presented an overview of what went wrong that resulted in alarming levels of lead in consumers’ tap water. He reported that his investigation also uncovered the presence of Legionella bacteria in Flint River water, possibly resulting in 10 deaths since the switch from lake water. A public health emergency was declared in Michigan in October 2015. Dr. Schwake also noted that massive contributions of bottled water provided immediate relief to Flint victims in the following days and weeks.

According to Dr. Schwake, the US EPA Inspector General’s office says more than 100 people submitted complaints to the agency between April 2014, when the city’s water supply was switched to the Flint River, and January 2016. The Inspector General is investigating US EPA’s response to the lead-contamination crisis. Flint’s drinking water became tainted when officials began drawing from the highly polluted Flint River in April 2014 to save money. The impoverished city of 100,000 north of Detroit was under state control at the time. At the same time, regulators failed to ensure the water was treated properly with corrosion-preventing phosphates that would coat the interior of pipes and prevent lead from aging pipes leaching into the water supply.

On January 16, President Obama signed an emergency declaration for the Federal Emergency Management Agency (FEMA) to coordinate all disaster-relief efforts. The declaration states that, “This emergency assistance is to provide water, water filters, water filter cartridges, water test kits and other necessary related items for a period of no more than 90 days.” And a January 29 article in The New York Times reported that Flint residents have received POU filters designed to remove lead up to 150 ppb.

Dr. Schwake reported that Flint residents were now benefiting from the restoration of source water from Lake Huron and the addition of corrosion-preventing chemicals to the distribution system. Decisions on replacing lead service pipes at government expense are pending further debate. This crisis is by no means over and other municipalities (Jackson, MI; Newark, NJ and others) have also reported lead-contamination events. The number of systems that still have lead premise plumbing is quite high and we can expect additional reports of such events in the future. A major infusion of capital to repair and/or replace existing piping is required and will take tremendous effort by citizens, law makers and investors to prevent a future filled with avoidable water contamination on a large scale.

WQA helps Chicago High School celebrate World Water Day
Every year since 1992, the United Nations has celebrated World Water Day on March 22, a day to bring public attention to world water issues. This year’s theme was Jobs and Water. On March 22, WQA joined four additional water-related organizations and the Illinois Sierra Club in sponsoring an after-school career fair for a group of 80 high school students from two schools interested in learning about career opportunities in the water sector. Of the six tabling participants, WQA and Pentair Water represented the water improvement industry at the event, held at Pritzker College Prep in Chicago. Jillian Ryan, Business Operations Coordinator from WQA headquarters, offered students information on the WQA Career Center, a national online water jobs clearinghouse for job seekers and employers in the water sector. Attendees, all expressing an environment bent, were receptive to learning how careers in water are many and varied for young people planning their futures.

About the author
D

avid H. Martin is President of Lenzi Martin Marketing, Oak Park, IL, a firm specializing in water improvement and environmental marketing that integrates old and new media. He can be reached at (708) 848-8404 or by email at [email protected]