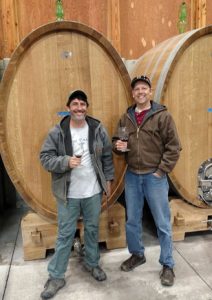 Neal Raab didn’t know much about water treatment when he followed his heart and moved to wine country in central California. His girlfriend had enrolled in college there—and stayed. “If I was serious about her, I had to move.” He did. After they married, he saw an ad for a water treatment job and came face to face with extreme water.

Sulfur is the biggest issue in San Luis Obispo County—but close behind is enough iron to make well water look like carrot juice. Factor in calcium, salinity, manganese, bacteria, barium and arsenic, plus dropping water tables and an earthquake, and you’ll have a taste of the challenges in this region, halfway between Los Angeles and San Francisco.

“The soil in our area is loaded with minerals, which makes for great wine but causes major problems with the groundwater,” Raab said. “The water here is extremely hard with high levels of hydrogen sulfide and metals. The drought has made things even worse. We’re seeing much higher levels of salinity, sulfates and bacterial contamination than ever before.

“I’ve always been involved in technical fields where I can apply my natural problem-solving talents. My start in the plumbing industry was in Orange County. When I moved to Paso Robles, I became more involved in water treatment. The most rewarding part of my job is solving problems that nobody else has been able to—and in knowing that I give my customers the best water for a fair price.”

Raab founded Applied Water Systems on January 2, 2004 and was the sole employee for nearly a decade. “We are recognized as the problem-water experts in this area. This puts a lot of pressure on us to choose the right technologies and products to do the job properly.” He learned early on the importance of testing well water and what he found could stump even the experts. Raab has worked for years with Mike Mecca of Performance Water Products, who introduced him to Greg Reyneke at Red Fox Advisors. “If I had not had those people behind me, I’d maybe not even be in business. It was so hard to treat the water when I didn’t know the chemistry and how things work together.” Early on Reyneke told him, “Holy cow, this is some of the worst water in the country.”

“I’d get an analysis back and contact Greg saying ‘I can’t fix this—what am I doing wrong?’ He’s one of those guys who likes a challenge. I lean on him for knowledge. He’s educating me on this extreme water we have and how to handle the complex chemistry.”

Reyneke said, “Neal is a small operation with a big presence because he’s so good at what he does. He does a lot of custom winery work with problem water. Neal has a genuine emphasis on customer service. The last time I was down in his area, it was great visiting the various wineries, meeting the winery owners and seeing how they would light up when talking about how Neal had helped them. I absolutely love working with him.”

Custom winery work
The microclimates in the hills and valleys surrounding Paso Robles are covered with vineyards. “A lot of these small wineries are family run,” Raab said. “Generally they live on the same property as the winery. I started out going to their homes to fix the water. I was there on the ground floor of the wine boom as new generations came in the 1990s.” Though grapes have been grown here since the 1800s, much of the land was used for cattle and crops that were dry farmed. Drilling new wells for vineyards has impacted the water table.

“It’s so intriguing. The minerals in the water are so diverse. The Adelaida area where vines grow today was once a mercury mine. Because this is a coastal region, some winemakers find whalebones on their land. City water here is very hard. In southern California it’s about 18 grains and here it’s 24. You can go over a little hill and find 125 grains.”

In 2003, two sulfur hot springs erupted in Paso Robles following a 6.9 earthquake along the coast. One was under the parking lot at City Hall. Scalding water and sediment spewed out at a rate of about 1,300 gallons per minute, forming a sinkhole in front of the library, according to news reports. There once was a bath house on the site and the spring was capped after it closed. Since that earthquake, Raab has had several customers drill wells and hit sulfurous water. Their wells still run warm; the water is about 80 degrees.

The ongoing drought and drop in the water table have created other challenges. In the past three months, Raab worked with several customers who had arsenic in their water, because it is coming from a lower level than before. There also are issues with bacteria. The water table now has air pockets “and when air and water are together, things grow in the damp and the dark.”

Standard solutions do not necessarily work here. “I’ve learned so much about ozone. You can’t just throw ozone at the problem. If you do not do this correctly, the other contaminants consume the ozone before it gets to the sulfur smell.” He’s also learned “if you have water that looks like carrot juice, you can’t just throw an iron system at it. The customer is not going to be happy. There are all kinds of other things to deal with. This keeps me excited. I think I’d have burned out if I was just working on city water. There’s always something new, something harder. It’s to the point now that I simply won’t sell a system without a water analysis .

“We serve a broad range of customers from residential to commercial on city water and well water. Some of our best moments are when we take disgusting water that stinks and clean it to where families and businesses can use it and even enjoy it.”

Identifying technologies that work
“We exclusively carry Crusader Water systems manufactured by Performance Water. We work a lot with ozone, reverse osmosis, nanofiltration, ion-exchange softeners, de-alkalizers, corrosion control systems and even salt-free systems. With the complicated water problems in our area, we quickly identify the technologies that actually work and the brands of equipment that will hold up under our extreme conditions.”

This small company has grown entirely by word of mouth. “All the smaller winemakers talk to each other. I do their homes, wineries, restaurants in town. I have some pretty high-end clientele in gated communities and they put our name out. One customer hounded me to advertise so I got a personalized license plate: ICLNWTR.

Raab admits, “I was reluctant to advertise. I was not sure I could handle the work. I’m so involved in the field. I like doing it right and keeping people happy. We grew from using Turbo Tax out of a garage to a shop shed and now a building of our own. I always knew I wanted to own my own business. In community college I took business management, but I never had formal business training or mentoring. I made a lot of mistakes along the way. That’s why I’m leaning on Greg. He’s teaching me.” Reyneke is helping him prepare for growth. The company now even has a Facebook page. And after 11 years Raab is about to finalize a logo. Until then, his trucks remain just plain white.

Raab’s impulsive decision in 1994 to follow his heart paid off. He not only got the girl, he built a challenging and rewarding business. “I just jumped in and never looked back. I would welcome either of my sons (now ages nine and 15) one day if they ever caught the water bug.”