It’s tasteless, odorless and colorless in water. It is highly toxic (a fact we have known and employed for over 2,000 years). As little as 100 milligrams will do you in.1 It’s Element #33 on The Periodic Table of the Elements and it’s in your drinking water. Arsenic is found all over the world in our soil (at about 5 ppm), sea water (at about 2 ppb), air (at 0.1 mg/m3 ppm) and surface and groundwaters used for municipal and home drinking water (at 2-10 ppb). The MCL for arsenic is 10 ppb in water (down from 50 ppb since 2006). It has been linked to cancer and it comes in two main flavors: 1) nasty toxic and 2) really nasty toxic. The only safe level in your water should be zero.2

Surface waters exposed to air will generally contain arsenic as the +5 (pentavalent or oxidized) specie, whereas groundwaters that are hypoxic (that is, low in dissolved oxygen) will contain arsenic as the +3 (trivalent or reduced) specie. Both are toxic but the trivalent is slightly more so. Both exist as weak arsenious acids (+3 as H3AsO3 or arsenite) and (+5 as H3AsO4 or arsenate). 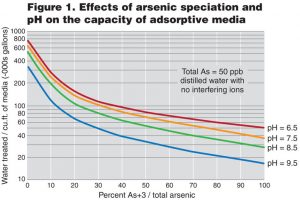 Arsenic can be readily removed from feed waters by a number of standard treatment processes. Reverse osmosis can be used if there is also a need to reduce TDS. Likewise for distillation. Municipalities favor coagulation/filtration by co-precipitating with the addition of iron. Anion exchange can be used with salt regeneration but most POE treatment has gone to adsorbants, such as activated alumina, bone char or various forms of iron oxide media. Adsorptive media all suffer from one common shortcoming: they don’t work as well on the arsenic +3 specie and they don’t do well at elevated pH. The chart in Figure 1 shows what you can expect if you use an adsorptive media to treat 50 ppb of total arsenic at 4 gpm. The chart is for one cubic foot of media and there are no interfering ions, such as silica, phosphates or oxy-metals in this water, just a mix of As+3 and As+5 at different pH values. The total throughput is read in thousands (-000s) of gallons per cubic foot of media and there are no engineering factors applied, just raw data to show relationship.

Discussion of data
As little as 10 percent As+3 can reduce the throughput capacity of adsorptive media by over 50 to 60 percent! That 25-ppb well you just fixed might well contain 5 ppb of As+3 and instead of changing the media every five or six years, you might be changing it every year (and on your dime) if you thought all arsenic was treated the same way. As+3 is more soluble than the +5 specie and it is more mobile in groundwater. That might suggest that it is more reactive but it is not. In fact, between a pH of 6.5 and 8.5, As+3 is an uncharged acid and doesn’t behave like a normal dissolved salt. It is not adsorbed as readily and even RO doesn’t reject it as well. Yes, it gets picked up but it greatly reduces the projected capacity of the media, as shown in Figure 1.

Feed water pH is also an important variable. Again, referencing Figure 1, even with 100-percent As+5, the throughput capacity of adsorptive media may lose 50 percent of its capacity over the typical pH range often found with well waters. An article written by Dr. Dennis Clifford in 20113 suggests that for better performance from adsorptive media, one may well be advised to adjust the characteristics of any given feed stream to improve media performance. The balance of this article will offer methods for converting As+3 to As+5 and a technique for adjusting pH downward that can increase the capacity of expensive adsorptive media up to tenfold.

Oxidation of arsenic
It is rare to find the As+3 specie dominant in any feed stream because almost all waters contain dissolved oxygen and As+3 converts quite readily to +5. Sometimes, in pulling a sample, one might not fill the sample bottle quite full enough and the air space in the bottle will provide sufficient oxidation to screw up the results of a speciation test. It has been shown, however, that aeration by itself is not a very reliable method of converting As+3.4  Chlorine dioxide, also an excellent oxidizer, doesn’t work well either, nor does UV (unless it is wicked high intensity). What does work is chlorine, chloramine, potassium permanganate, peroxide, ozone and pyrolucite oxidation media. According to Clifford, you need about 45 seconds empty bed contact time (EBCT) which translates to 10 gpm/cu ft. My preference is 1.5 minutes (5 gpm/cu ft). Liquid oxidizer feed rates will depend upon arsenic levels, chemical concentrations and usage patterns, so a little trial and error may be needed to get you there.

I worked on a project in Arizona 20 years ago with the late Frank Borowski to treat a well that had the unheard of total arsenic level of over 10,000 ppb! Speciation wasn’t done much that far back. So, we decided to chlorinate directly out of the well at about 10 ppm of calculated chlorine and store the water for about an hour before sending it to a GAC filter (to remove excess chlorine, if there was any) then on to a strong base anion unit sized at 2 gpm/cu ft. In those days, the MCL for arsenic was 50 ppb. There was no problem meeting that requirement. In fact, treatment generally dropped the arsenic down to the 10-15 ppb range and to my knowledge, it operates below 10 ppb today.

Controlling pH
Speaking of strong base anion, what better way can you think of for dropping the pH of a feed stream than by utilizing SBA resin as a dealkalizer? Removing alkalinity from water and replacing it with chloride ion will knock a typical pH down from 8.5 to about 6.8, which does two things: 1) it reduces the pH of the steam so that the adsorptive media will function better and 2) it reduces the total arsenic load by picking up almost all of the As+5 load, which greatly prolongs the life of the adsorptive media (see Figure 1).

Bonus
In the event your water contains iron and arsenic (and you suspect there may be As+3), you might decide to use an oxidizing media to take out the iron. A proper choice for this process can also oxidize the arsenic as well. The precipitating iron (oxide) will grab onto the arsenic and drop out as a complex FeAsO4. For example, an installation at a church/school in northern California had to treat not only 68 ppb of arsenic (with 17 ppb of As+3), but over 3.0 ppm of iron and 0.2 ppm of manganese as well. The oxidizing filter not only pulled out the Fe/Mn but reduced the effluent arsenic to < 1 ppb. You have to be sure there is sufficient dissolved oxygen in the water and the iron level has to be at least 10 times the arsenic level. Instead of an iron filter followed by a lead/lag (two in series) arsenic filter, we were able to use the iron filter as the primary and follow it with only a polishing adsorptive media for redundancy. Author’s note: you could also inject iron to do the same job if Mother Nature wasn’t cooperating with a sufficient iron level.

Yet another example involves a large family home in Utah that had arsenic in their newly produced well and the homeowner was seeking some help. The local dealer told me that the total arsenic was only 25 ppb but the pH was high (8.6) and the silica levels were off the chart at 52 ppm. Silica has a very negative impact on adsorption media capacity, especially at elevated pH. Since silica removal is very difficult for a salt-regenerated system, we decided to take the silica out of play by reducing the pH with a strong base dealkalizer (and then through the arsenic adsorber). The SBA dropped the pH from 8.6 down to 7.1 and the arsenic was reduced to under 5 ppb, which facilitated the adsorber to do its job and provide over 10 times the life. The arsenic was not initially speciated and it is speculated that the 5 ppb exiting the SBA may have been As+3.

Conclusions and discussion
Zero is the only safe level for arsenic in drinking water. With that in mind, one must operate any removal system as effectively as possible to prolong removal capacity and efficiency for better long-term operating cost. Silica and high pH have a negative impact on the longevity of adsorptive media. Reducing pH with the use of strong-based anion resin, operated in the salt form, improves the operation in three ways: 1) it permits a higher capacity due to the higher activity of the arsenic at the lower pH, 2) it reduces the capacity interference of the silica at lower pH and 3) it reduces the arsenic load to the adsorptive media.

Arsenic +5 is more readily removed than is +3 by both the SBA resin and the adsorbant media. Using an oxidizing media such as pyrolucite can accomplish this. If there is iron present, the oxidation process will knock down the iron, which in turn, picks up both As+5 and As+3, while converting the As+3 to +5 in the process.

About the author
C.F. ‘Chubb’ Michaud is Technical Director and CEO of Systematix Company of Buena Park, CA and a 40-year veteran of water treatment design. In recognition of his many technical papers and contributions to the industry, he was twice awarded the Robert Gans Award by the Pacific Water Quality Association (PWQA) and the Merit Award by WQA. He is also an inductee to the prestigious Hall of Fame by both organizations. He can be contacted via email at askchubb@aol.com.