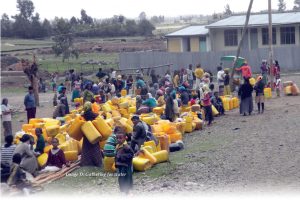 There are hundreds of thousands of water wells in the US with challenges such as coliform and E. coli contamination or have yield-reducing plugged issues from mineral deposits or iron bacterial growths. If and when those water wells become plugged, there are several potential rehab missteps contractors could make, including: 1) misdiagnosis; 2) poor water sampling/testing; 3) using chemicals not designed for the problem or 4) using toxic chemicals that could damage the well infrastructure and endanger the environment.

Decades ago, water wells plugged with iron bacteria/slime-forming bacteria or mineral deposits could only be rehabbed with the acidic chemicals of the time, such as hydrochloric, muriatic, phosphoric and sulfamic acids. Those standard but corrosive and toxic acid-based chemicals do work well against iron bacteria or slime formers; however, they are not long-term solutions. These shortcomings have produced industry myths that water-well iron bacteria can’t be eliminated. They are also destructive to well piping, components, infrastructure and the environment (see Images A and B).

Mineral deposits vary in difficulty to dissolve; therefore, the acid of choice can be critical to success. For example, sulfamic acid can dissolve calcium (but not calcium sulfate), while sulfamic, hydrochloric and muriatic acids don’t work well on manganese (black) or sulfates (green or blue). Hydrochloric and muriatic acids used against a calcium deposit can potentially blow up in a well. Today, many water-well service companies still rely on these old-school, environmentally unfriendly chemicals for increasing capacity by reducing accumulations in piping systems, ranging from water-well bore holes to commercial and residential piping applications associated with water supply. Some of these acids have compounds that include lead, zinc and arsenic, which are obviously drinking water taboos.

In addition to long-term damage to screens, well casings or piping system infrastructure, these corrosive chemicals must be collected and transported from the site under regulatory and expensive hazmat-certified containers and vehicles to authorized reclamation sites as per US EPA standards. These chemicals are also dangerous to site workers. Fume inhalation and skin contact can hospitalize workers, initiate lifelong ailments and in some cases, cause instantaneous death. Therefore, hazmat suits and safety breathing masks should be worn during the application. 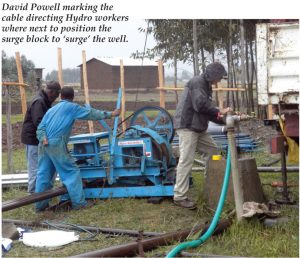 Better sampling and testing
Sampling of actual debris from pump or piping interiors can help determine if it’s what is normally found or something unusual, in addition to determining if it’s mineral, biological or a physical problem with the well infrastructure. A separate sludge analysis can also confirm whether the debris is normal or requires special treatment recommendations. Silts, sand and corrosion particles that are often coated with slime require an entirely different rehab direction.

Water sampling on what’s called timed bacterial analysis can reveal whether the problem is contained in the well itself and 100-percent treatable long term, or the result of an outside source, such as grout issues, corrosion or surface water. These outside sources limit long-term treatment. Competent field-sampling procedures require timed samples from within the well casing and one long-term sample from the aquifer. A successful treatment can last for more than 25 years when an aquifer sample reveals normal bacteria counts and normal identified contaminants. Many test labs omit this methodology and instead just perform test procedures recommended by US EPA.

Over 90 percent of the slime plugging wells isn’t due to iron bacteria, but instead aerobic heterotrophic bacteria. A local lab that tests only for iron bacteria may show low numbers or a negative diagnosis; however, the undetected slime-forming heterotrophic bacteria continues to cause massive well plugging. Once again, competent, timed filed samples can help provide a better rehab plan. Oftentimes a contractor overlooks the sampling process, performs a very expensive ($30,000 to $100,000 USD) rehab procedure and then doesn’t understand why the treatment failed long term. Today’s non-toxic, non-corrosive chemicals (a combination of non-corrosive acids that work toward dissolving accumulations only when added to water) can improve success, because they’re more effective in removing bacterial and mineral accumulations in piping. They can also clean bricks and swimming-pool walls but are safe enough to wash human hands. Only NSF-approved chemicals should be used. 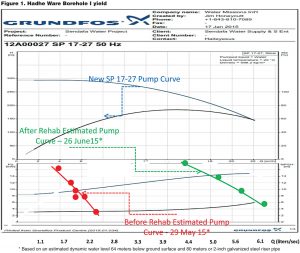 Two case studies
One case in point was a partially blocked Sendafa, Ethiopia water well that was returned to full capacity by donor US well drilling industry members and funded by Christian charities in the summer of 2015. Preparation began in the US with testing and analysis of pipe accumulation debris, which revealed slime-forming bacteria was blocking the screen-style water well’s submersible 25-hp pump and the interior of the 1,082-ft (330-m) HDPE three-inch (7.5-cm) diameter pipe. The blockage was not silt, but bacteria that could be removed with chemical treatments, according to contractors on the project. They chose a product and method that has been available for a number of years and used in approximately 30,000 projects.

Air-lifting the well preceded an application of 16 gallons (60 liters) of acid-forming catalyst mixed with 170 lbs (80 kg) of an ANSI/NSF 60-certified granular, non-corrosive, biodegradable, organic acid. The successful mission (see Image C) increased the well’s output (see Figures 1 and 2) from approximately 2 L/s (32-g/m) to 4.7 L/s (74 g/m). This eliminated the long wait for 15,000 residents to fill water containers (see Image D) and is vital to their water quantity and health. (The charitable organization’s remaining supply of the catalyst and organic acid will also be applied periodically to prevent future pump and piping mineral accumulations.) 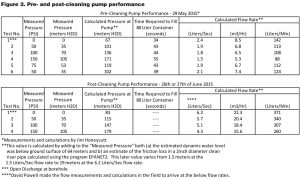 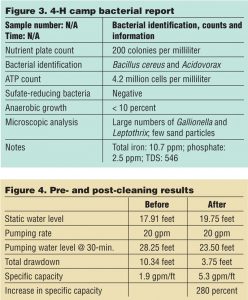 The project required four days, restored the well to its original usefulness and saved the campground approximately $10,000 versus drilling another six-inch-diameter well.

Conclusion
The US has a proliferation of water wells needing rehab due to mineral and bacteria accumulations. Only a proper pre-rehab analysis will reveal the most effective solution methodology. And only the use of safer, less toxic chemicals will help solve the well problem, while still providing optimum water quality and environmental preservation.

Mike Melancon, National Sales Manager, Design Water Technologies (DWT) Div. of Jet-Lube (www.jetlube.com), is a 35-veteran of the water well/pipe, valve and fitting industry. He can be reached at mike.melancon@jetlube.com. David Hanson, Founder and technical advisor for Design Water Technologies (which he sold to Jet-Lube in 2011), as well as the 2003 NGWA McEllhiney Distinguished Lecturer, contributed to this article.

About the companies and products
Design Water Technologies/Jet-Lube’s lab focuses on well and system problems that cause plugging due to biological and/or mineral deposits. DWT manufactures the Unicid Granular product that is a formulation of organic acids enhanced by chelates, dispersants and inhibitors, as well as Unicid Catalyst. Non-corrosive, safe for disposal and highly effective, they are significantly safer than traditional sulfamic acids, yet have unique dissolving capabilities. These biodegradable, non-corrosive, environmentally safe chemicals are designed for safely cleaning water well infrastructure plugging and municipal piping interior accumulations.

Nebraska: The rehab was sponsored by the Nebraska Health & Human Services, State of Nebraska and the Nebraska Well Drillers Association. A 30-minute educational video detailing the well’s step-by-step rehab was filmed by the University of Nebraska, Lincoln, Conservation Survey Division and now appears on YouTube as Design Water Video–Well Rehab. The work was performed by Grosch Irrigation Co., Silver Creek, NE.