“The Water Business Saved My Life” 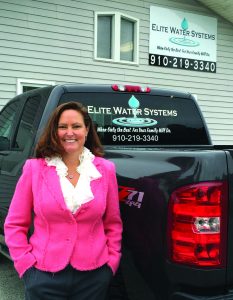 Melissa Hardin began her career as a radiation therapist, traveling around the US to work where needed in cancer centers. “I loved it and was good at it—but it didn’t like me physically,” she said. Because she was diagnosed with Crohn’s Disease at an early age, it wasn’t the radiation itself that posed a problem. It was pushing and pulling heavy stretchers and helping scores of patients a day get on and off the table. Her health declined rapidly.

It was time for a change. “I wanted a change that would give my body an opportunity to heal,” she said. She answered a newspaper ad for a water technician and got the job “with no background in sales whatsoever,” she said. “I interviewed, started training and sold on my first day out. 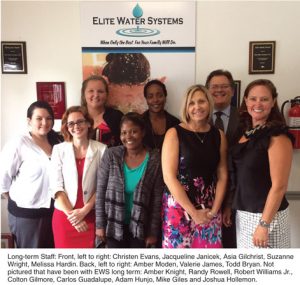 “The water business intrigued me. I could go to the house, meet people and change their lives by changing their water quality. I figured out this was something I was good at, that was easy for me and I loved it.

“The water business saved my life. Within 90 days, my health had significantly improved, allowing me to forego the 26 pills daily I had been prescribed. And 14 years later, I’m still free of the medication regimen.”

That personal experience fuels Hardin’s passion for the water industry and ultimately led her to open her own business, Elite Water Systems in Jacksonville, NC. “If you look at the studies and statistics on water quality, even the amount of contaminants found in the water can increase cancer risk by 80 percent,” she said.

“North Carolina has the third worst water in the US, with high levels of hardness, calcium and magnesium. If I can improve someone’s life the way clean water improved mine, I get great satisfaction from that,” she said. 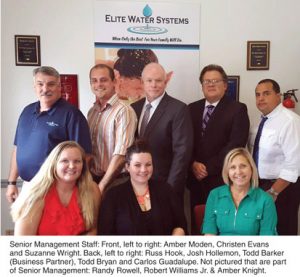 Hardin started in sales and worked her way through all aspects of the water business. “I wanted to know about everything I possibly could. I worked for four water dealers before I became a dealer myself. I learned the sales portion of the industry—I excelled at that—and was a sales trainer. I worked in marketing on the phone, calling and setting up appointments. I worked trade shows. I learned the finance portion and finally was General Manager for one of the largest dealerships on the East Coast.

“In 2012, when I was informed that my current dealer was going out of business, I knew that I was ready to become an owner. I chose LeverEdge because they were family-owned and had the most aggressive financing on the market. There was just one problem: I hadn’t saved enough money.

“I called my father and said, ‘Dad I don’t think I can do it.’ I explained that I felt confident in my abilities to create my dreams but hadn’t saved enough money to place my second equipment order once I had sold the first. His reply was ‘Of course you can do it. I didn’t raise a quitter.’ He took me to the bank, handed me a blank check and told me to fill it out. He believed in me that much. I was elated and in tears and knew at that very moment that I could never fail. Elite Water Systems was born.”

The first office was 900 square feet with three employees. Hardin repaid her father within 45 days. Within a year, the business upgraded to a 3,000-square-foot facility and had grown to 25 employees. “Our second and third years, we obtained number-one status nationwide among Westinghouse Progressive Dealers.”

Hardin’s parents are her inspiration and employees are her family. “It sounds like a cliché but it’s true,” she said. “We are very selective during our hiring process. We hire candidates based on their attitudes, drive and willingness to learn new things and succeed. I am not afraid to hire and pay for people with talent. Because of this and the motivating atmosphere that we create, our employee turnover is among the lowest in the industry.”

Hardin said she’s a rare breed. “I don’t keep anything from my employees. If something happens, it happens to all of us. If we have a great month or we have a bad month, we fail or succeed as a family. I’m not in this to make money for five years and close down. I want to build a brand, something I can leave for my family, my employees and my employees’ kids.”

Suzanne Wright is Vice President of Finance for Elite Water Systems. She said: “The advancement possibilities and incentives here are endless. The motivation for each person to reach their full potential is astounding.” Wright started with the company as a part-time receptionist and was promoted to Office Administrator, Finance Manager, then Vice President of Finance.

In August 2013, Hardin and a partner opened Elite Water Systems of Charlotte, NC and a year later Elite Water Systems of the Triangle, serving Raleigh, NC. Her business partner, Todd Barker (a partial owner of both companies) also started his career in sales. “He pitched me cameras for my business that were Internet-based, so I could be at home and still know what was happening in my business. We became friends right off the bat. He was looking for a new opportunity where he could have part ownership and I was looking to branch out. He lived in one of the areas where I wanted to open an office.

“This is not a family-owned business; however, we do employ several family teams: a mother and son, a father and daughter, a brother and sister.” Her older brother is proud of her success but not involved in the business, yet. “The operative word is yet,” Hardin said.
“The most rewarding thing about our business is that it affords us the luxury of giving back to our employees and the community.” This includes:

“Last year we chose a grandmother who’s raising three grandchildren,” Hardin said. Employees delivered a Christmas tree, lights, ornaments and wrapped presents, plus all the ingredients for a holiday dinner. “When we brought everything in, she cried. She had not been able to buy a ham in years.”

What’s on Hardin’s horizon? “I want to continue to build. But I don’t want to get so big that I don’t know my employees’ families and have never met their spouses. That’s very important to me.”