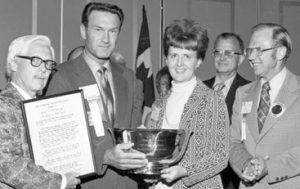 Carroll S. ‘Bud’ Mohr, water industry veteran and inventor, passed away August 24 in Santa Barbara, CA with his wife Joanne and daughter Julia by his side. Born July 8, 1931 in Douglas, WY, he was raised on his family’s Fiddleback ranch. Mohr moved to Laramie, where he attended Laramie High School and then the University of Wyoming on a football scholarship. He graduated in 1952 with a Bachelor’s Degree in business, then served in the US Army during the Korean War, continuing his military service in the Naval Reserve. Mohr headed west to California’s Fountain Valley, where he owned a Rayne Water Conditioning dealership for over 20 years. 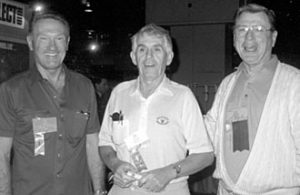 He was a pivotal member of WCAI (predecessor to WQA) and actively involved in the Pacific Water Quality Association. Mohr served as PWQA President for the 1968-1969 term and received the association’s Robert Gans Award in 1971. He founded USA Resin in 1990 and worked from his home office until he retired in 2005. Mohr is survived by his wife of 37 years, Joanne Howe Mohr, daughter Julia (Rey) Alcerro, stepson Gene (Angie) Howe and stepdaughter Nancy (Tim) Sharp, as well as seven grandchildren, one great granddaughter and two nephews. A memorial service was held August 29 at the Montecito Country Club.

The International Association of Plumbing and Mechanical Officials (IAPMO) has promoted Shirley Dewi to Senior Vice President of IAPMO R&T’s Management System Registration Services and Dain Hansen to Senior Vice President of Government Relations. Dewi played a key role in Indonesia’s adoption of a plumbing national standard that incorporated sections of IAPMO’s Uniform Plumbing Code (UPC®). Prior to joining IAPMO R&T in 2007, she worked as a quality manager in the plastic injection molding and electronics industries, served as a contract auditor for IAPMO R&T and was an operations analyst for Lockheed Martin IMS. Dewi holds a Bachelor’s Degree in business management from Cal Poly Pomona.

Since joining IAPMO in 2010, Hansen has overseen the creation and development of IAPMO’s Washington, DC office, including the organization’s legislative and regulatory initiatives. Previously, Hansen worked for the National Electrical Manufacturers Association, worked on Capitol Hill as a senior policy adviser and worked on various political campaigns. He holds degrees from Brigham Young University-Idaho and Ricks College and is also an Eagle Scout.

Kenneth J. ‘Ken’ Murray has joined Parsons as Senior Vice President of its environment and infrastructure business unit. In this role, he will partner with division and regional managers to formalize and execute Parsons’ growth strategy. In addition, Murray will lead the environment and infrastructure business unit’s regional growth in Canada with target customers as well as direct financial performance, operations and sales. Murray has more than 27 years of experience in engineering, procurement and construction businesses. He holds a Master’s Degree in business administration from the University of Calgary in Canada and a Bachelor’s Degree in mechanical engineering from the Memorial University of Newfoundland in Canada. Murray is a professional engineer, registered in the Province of Alberta with the Association of Professional Engineers and Geoscientists of Alberta.

The International Desalination Association (IDA) announced that Emilio Gabbrielli, Director, Overseas Business Development – Global Sales of Water Treatment for Toray, has been elected President of the association for the 2015-2017 term. In addition, Shannon McCarthy, Co-founder and a Partner of United4Water, has been named 1st Vice President and Eng. Zamzam Saleh Al-Rakaf, Chief Engineer and Director of Design Department for Desalination Projects for the Ministry of Electricity & Water – Kuwait, has been named 2nd Vice President. Gabbrielli has been involved in the water treatment industry for more than 40 years. He holds a degree in chemical engineering from the Bologna University, where he also obtained a post-graduate specialization certificate in computer modeling as part of a research program developed on the basis of his degree dissertation. Gabbrielli joined Toray in 2009 and is based in Brazil.

Former National Ground Water Association President John ‘Jack’ W. Henrich, MGWC, CVCLD, CGD, President of Bergerson-Caswell Inc., has received the Association’s Standard Bearer Award for outstanding volunteer involvement in the legislative process. In addition to serving as NGWA President in 2011, Henrich also attended the NGWA Legislative Fly-ins held in 1999, 2001-2004 and 2006-2013; participated in the NGWA Standard Bearer grassroots letter-writing program and served on NGWA’s Rural Water Subcommittee, DOT/OSHA Subcommittee and the Government Affairs Committee. He also received another major NGWA honor when he was chosen to receive the 2012 Robert Storm Interdivisional Cooperation Award. Dr. Sorab Panday, GSI Environmental Inc., has received the 2015 M. King Hubbert Award for major science contributions to the knowledge of groundwater. Best known as the author of MODFLOW-USG, he is also credited with serving as an adjunct professor at the University of Waterloo; mentoring professional staff at numerous private companies and public agencies; teaching numerical modeling courses at public, private and educational institutions and publishing and presenting widely on groundwater, water resources and environmental topics. Scott Fowler, CWD/PI and President of Dahlman Pump and Well Drilling Inc. has received NGWA’s top honor , the Ross L. Oliver Award, for outstanding contributions to the groundwater industry. James ‘Jim’ Jackson, President and CEO of Alloy Machine Works Inc., has received the Manufacturers Division Special Recognition Award for his contributions to the groundwater industry from the manufacturing sector. The awards will be presented during the 2015 Groundwater Expo in Las Vegas, NV, December 15-17.

Bill Fallow, P.Eng, Chief Plumbing Inspector, Technical Inspection Services, Department of Public Safety, New Brunswick, has been named the 15th recipient of the Joseph K. Seidner Award. He was presented with the award at the annual Canadian Advisory Council on Plumbing Meeting in Vancouver, BC, in August. The award is in recognition of Fallow’s outstanding contributions to Canadian plumbing codes and standards.The Canadian Advisory Council on Plumbing provides a forum for industry, regulators and product-certification organizations to share new concepts and ideas, to discuss policy and programs, and to review innovations and new technologies that affect plumbing standards, and the certification and testing of plumbing products.