Monday was dominated by the WQA Board of Directors’ orientation, meeting and evening reception. Tuesday morning was reserved for benefit outings of the Water Quality Research Foundation (WQRF), which saw some member participants enjoying a cowboy breakfast and jeep desert tour, followed by a tour of the historic San Xavier Mission. Others played in the annual WQRF benefit golf outing. The afternoon was filled with task force and committee meetings, and ended with the welcome reception.

The conference’s Wednesday general session presented with great anticipation the association’s new committee structure, as well as a draft of the 2016-18 WQA Strategic Plan. The afternoon saw the end of an era, when other committees and task forces met for perhaps the last time under their traditional names and configurations, save for a six-month transition before next year’s annual convention in Nashville, TN.

“Committees, sections and task forces, under their current structure, will continue to meet, taking the six months between the mid-year conference and the 2016 convention to finalize their transitions,” said David Westman, interim WQA Executive Director. 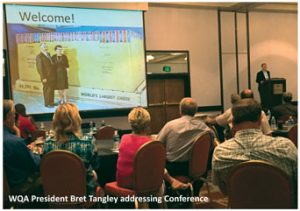 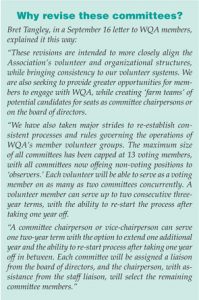 WQA restructures volunteer committees
The restructuring announced in Tucson affects 11 volunteer groups, said WQA Marketing Communications Director, Larry Deutsch. “The Governance Committe has been established as a subcommittee of the board of directors. The International Section will absorb the duties of the international standards and regulations task force. The Industrial Section will be renamed, the Commercial/Industrial Section.” 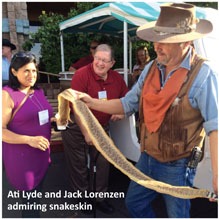 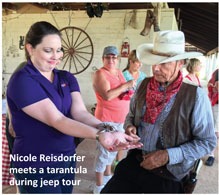 Said Tangley: “The Strategic Planning Task Force has worked tirelessly throughout the spring and summer to benchmark the plan against similar organizations and compile input from the board of directors, other industry leaders and key staff. Staff are currently working hard to develop tactics and milestones to achieve the strategies listed in their strategic goals, so the necessary costs may be incorporated in the 2016 budget.”

WQA members are encouraged to download the current draft of the Strategic Plan from the association’s website. Tangley’s Sept. 16 letter invited members to submit their comments on the plan to Lynn Mathers, WQA Executive Services Manager on or before September 25 at lmathers@wqa.org.

International Section meeting
Tina Donda reported that the WQA International Section had 441 members at the end of last year. Since July, membership has grown to 470. Europe is up 16 memberships in the first six months of 2015; Mexico is up eight members and China is up three members. Membership of people from India has declined since the creation of WQIA.

Steve Ver Strat described the International Section’s greatest challenge as “lack of engagement” among the members. The following questions are in need of answers:
•    What is WQA doing to serve international members?
•    Why do they want to be part of WQA?
•    What do they depend on WQA for?
•    How can the diverse membership be better served?

A member survey was proposed to determine the main benefits of membership. A distinction was noted between Europe and Korea, as well as other developing markets. (In developing countries, people sign up just to use the WQA logo.) European members value WQA’s regulatory work and help with exporting regulations. It was noted that WQA has a large knowledge base and WQRF studies among its assets for international members. WQA is a member of Aqua Europa, EWTA and a part of the ICPCDW consortium

Conclusion
This year’s WQA Mid-Year Leadership Conference introduced a sea change in the association’s structure and strategic strategy going forward. With all of that, attendees enjoyed their days soaking up Tucson’s natural beauty.

About the author
David H. Martin is President of Lenzi Martin Marketing, Oak Park, IL, a firm specializing in water improvement and environmental marketing that integrates old and new media. He can be reached at (708) 848-8404 or by email at dmartin@lenzimartin.com