Cyanotoxins are a group of contaminants that can result in surface waters due to the presence of cyanobacteria, also known as blue-green algae, that can produce these compounds. They are highly toxic and can be present in finished drinking water supplies when there are algae blooms that produce the compounds and treatment is not adequate. Exposure to cyanotoxins through drinking water and/or recreational water have been known to harm human health, causing a wide range of symptoms, including liver and kidney damage in more severe cases. When cyanotoxin levels spike above safe levels, consumers are urged to seek alternative water supplies, usually in the form of bottled water, which can be expensive and burdensome, particularly during prolonged periods of water contamination. Microcystins are a class of cyanotoxins which have been detected in finished drinking water supplies in the US.

Action by US EPA leads to action by NSF
Earlier in 2015, in response to these compounds being detected in finished drinking water supplies in the US, US EPA set recommended health advisories for microcystins in drinking water at or below 0.3 µg/L for children less than six years old and at or below 1.6 µg/L for older children and adults. The detection of these compounds in drinking water and the recent actions of US EPA have helped to create significant consumer and regulatory interest in POU products that can effectively treat microcystin contamination. Considering this interest, NSF has developed new NSF Protocol 477 Drinking Water Treatment Units–Microcystin. This protocol covers POU active media systems, such as those that fall under the scope of NSF/ANSI 53.

NSF has taken the US EPA advisories, as well as occurrence levels of microcystins in drinking water, into account in developing this new protocol. Careful and considered work has gone into validating the protocol as a robust basis for product certification. NSF scientists did extensive work to locate and validate sources of microcystin and refined analytical methodologies to allow accurate and precise identification and quantification of microcystin in drinking water. NSF also considered the health and safety of laboratory staff in implementing safe handling procedures for microcystin. And, NSF investigated the performance of various types of active media in treating microcystin in drinking water as part of the validation testing phase of protocol development.

Protocol scope
The result is a new claim of microcystin reduction for active-media POU systems that is now available for testing and certification. The scope of the protocol is restricted to POU systems because of the cost and limited availability of microcystin chemical required for the test. Testing POE systems would be prohibitively expensive and logistically difficult due to the limited amount of microcystin available in the market currently. Another limitation in the scope of the protocol is that the application is limited to public water supplies. Private water supplies are not actively monitored for the presence of cyanotoxins; those derived from surface waters or groundwater under the influence of surface water could be contaminated with the actual cyanotoxic bacteria cells. The test method in NSF P477 does not address reduction of bacteria, only the microcystin released by the bacteria. Further, any retained bacteria could lyse additional cyanotoxins within the treatment system, a phenomenon which also is not addressed in the protocol.

Testing microcystin reduction
This claim requires reduction of 4 µg/L of microcystin to a level of 0.3 µg/L or lower; 4 µg/L is consistent with the highest levels detected in finished drinking water in North America and the 0.3 µg/L is based on the US EPA recommended health advisory for children less than six years old. The remaining requirements in the test for microcystin reduction are based on the requirements of NSF/ANSI 53. Testing must be conducted to 200 percent of a manufacturer’s claimed treatment capacity, or 120 percent of capacity if there is a performance indication device (PID). Plumbed-in systems are tested with a 60-psig inlet pressure at the highest achievable flowrate, with a 50/50 or 10/90 on/off operational cycle. Six sets of influent and effluent samples are collected throughout the test, with two units tested, just as in NSF/ANSI 53. The other requirements of NSF P477 are identical to those in NSF/ANSI 53. Systems must undergo extraction testing with and without the active media according to the test methodology described in NSF/ANSI 53. Plumbed-in systems must be tested for structural integrity as well.

Product literature requirements
There are some additional product literature requirements in NSF P477 that are designed to instruct end users in proper use. Basically, end users are advised to follow instructions issued by their local drinking water authority when it comes to any sort of cyanotoxins being detected in their drinking water. This is very important because systems conforming to NSF P477 have been evaluated for their effectiveness in treating microcystin, but there are other cyanotoxin compounds that could potentially be present in the drinking water. These systems have not been evaluated for effectiveness in treating these other toxins. Although microcystin is the most commonly detected cyanotoxin in drinking water and one of the most toxic, other cyanotoxins that have been detected in drinking water include compounds such as anatoxin-A and cylindrospermopsin, among others. Figure 1 includes a summary of all of the requirements of NSF P477. 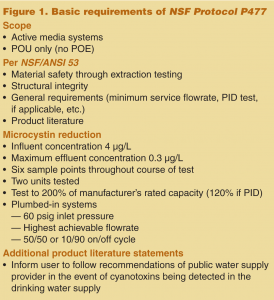 Protocol development, testing and certification
Contamination of drinking water supplies with cyanotoxins is a real concern for people in areas drawing drinking water from surface water sources, especially those surface waters at risk for cyanobacteria blooms in late summer. These people are seeking information and solutions to a problem that is being monitored and addressed, but nonetheless could directly affect the safety of their drinking water. US EPA and Health Canada are taking action by developing health advisories and public water supplies are working hard to understand, monitor and address cyanotoxins. NSF has also stepped up and developed a protocol for evaluation of POU technologies to treat microcystin in drinking water. And the POU community, as it has done so consistently throughout the industry’s history, is working to provide solutions for these people by working with NSF to evaluate and certify their products. NSF expects that within a few months, the first products certified to NSF P477 will be available in the marketplace. In the end, multiple stakeholders benefit—a true win-win scenario.

Rick Andrew is NSF’s Director of Global Business Development—Water Systems. Previously, he served as General Manager of NSF’s Drinking Water Treatment Units (POU/POE), ERS (Protocols) and Biosafety Cabinetry Programs. Andrew has a Bachelor’s Degree in chemistry and an MBA from the University of Michigan. He can be reached at (800) NSF-MARK or email [email protected].