Legionella is in the news again, this time due to the deaths of at least 12 New York City residents and more than 124 illness cases, with 94 resulting in hospitalizations. While the current outbreak is likely from cooling-tower water aerosols and not directly from drinking water, similarities between exposure and risk potentials of these environments provide valuable learning tools for outbreak prevention.

2015 New York outbreak
Many questions remain regarding the outbreak of Legionnaire’s Disease plaguing New York City’s South Bronx neighborhood. For one, the epicenter of the outbreak has not yet been identified. Genetic source-tracking methods, however, are being used to link the victims’ strain with environmental isolates from several buildings where clusters of infected individuals have been identified. While no new cases in the New York City outbreak have occurred since August 3, many are still asking: “How could this happen?”

The source of the current outbreak is thought to be cooling towers from local businesses, including hotels, spread throughout the region. At least five potential sites were originally identified. This discovery prompted New York Governor Andrew Cuomo to issue the deployment of 150 additional state officials to assist with water testing to track further exposure sources. Following expanded surveillance, a total of 18 cooling towers tested positive in the region, including a school, hospital, nursing home, post office, apartment buildings, a government building and other businesses1,2.

Cooling towers are common components of building HVAC (heating, ventilating and air conditioning) systems and control hot and cold air in buildings. They have long been recognized as a source for Legionella. Reportedly, at least some of the Legionella-positive buildings followed industry guidelines to clean and disinfect cooling towers twice a year.

Historical outbreaks
Legionella bacteria were first identified following an outbreak at an American Legion convention in Philadelphia in 1976. The epidemic of fatal pneumonia claimed the lives of 34 war veterans and other conference attendees. A total of 221 cases were documented. This outbreak was linked to an air conditioning system. Earlier outbreaks were later identified, including one in Spain at the Hotel Rio Park that was traced to Legionella in shower pipes. This contamination event resulted in four deaths and provided the first evidence of a POU tap-water exposure link.

A 2008 outbreak in New Brunswick, NJ, Saint Peter’s University Hospital, was also attributed to the hospital drinking water supply and a reduced residual chlorine level in the distribution system. This outbreak claimed the lives of three of the eight patients testing positive for the disease. In 2012, an estimated 10 cases and three deaths due to Legionella in a decorative lobby fountain at a JW Marriott Hotel in Chicago, IL were also documented. This outbreak had a very high case-fatality rate of 30 percent. In 2013, 22 cases and six deaths at a VA hospital in Pittsburg, PA were linked to Legionella that may have persisted in the hospital’s plumbing for more than 30 years.

In December 2013, a review in On Tap listed US drinking waterborne outbreaks during the January 2009 to December 2010 CDC surveillance period. Data beyond 2010 has not yet been released by the CDC. During these two years, a total of 33 outbreaks associated with drinking water were reported from 17 states, resulting in 1,040 cases of illness, 85 hospitalizations (8.2 percent of cases) and nine deaths. The majority (n=19; 58 percent) of outbreaks were due to Legionella. Further, Legionella was responsible for nearly all of the deaths associated with waterborne disease outbreaks during 2009-2010. All water systems involved were community water supplies. Premise plumbing systems, however, were the most common sources of the problem3.

What is legionellosis?
Legionellosis is the disease caused by Legionella bacteria. The bacteria are naturally present in the environment and commonly isolated from water systems. Symptoms include a mild flu-like illness, known as Pontiac Fever or a more severe pneumonia known as Legionnaire’s Disease (Table 1). Symptoms mimic other common ailments and may go unnoticed until illness is more advanced. Milder infections typically resolve without treatment but antibiotics are also available. Antibiotics are not always effective, particularly in the immunocompromised, very young and elderly populations where symptoms and severe health outcomes are more probable. Reportedly, all of the fatal cases in the New York outbreak were patients with other underlying health conditions. Overall the case fatality rate of Legionnaire’s Disease is typically five to 15 percent. 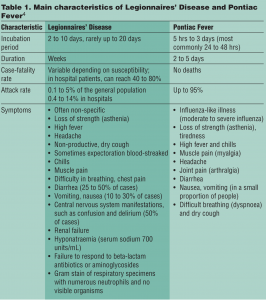 The week of August 17, New York City issued a state-wide emergency regulation requiring all owners of buildings with cooling towers to register their equipment within 30 days, monitor for Legionella every 90 days and to immediately disinfect any tower that tests positive5. Exposure to Legionella is usually via inhalation from air cooling units, fountains, misting devices or shower aerosols. Currently, commercial or residential showers and misters are not as stringently targeted for monitoring and treatment. Water distribution systems and local plumbing systems are easily colonized with Legionella, which readily persists in water temperatures ranging from 30°C to 70°C. The optimal growth temperature is between 32°C to 42°C. Thus, hot water heaters should be set at 60°C, but this temperature does present a potential scalding risk, especially for small children. At 50°C, the bacteria can survive but do not multiply.

In 2007, The World Health Organization published a document on how to control for Legionella in water distribution systems. Interventions included a multi-barrier approach aimed at preventing the microbe from entering the distribution system, controlling nutrient levels that promote bacterial growth, managing zones of stagnation and optimal temperatures, minimizing amoebic populations and the use of disinfectants. Dosing piped water systems with sodium hypochlorite, monochloramine or chlorine dioxide are all effective biocidal treatments but must be routinely applied to prevent the growth of Legionella. Conventional municipal water treatment is not always effective for eliminating Legionella from the consumer’s water source since the organisms are indigenous to the plumbing and distribution system where residual levels of disinfectant are not high enough to kill the growing, often biofilm-associated, populations. In addition to protective biofilms, the ability of Legionella bacteria to live symbiotically inside other free-living amoeba further protect the organisms from detection and contact with biocides. Surveillance is an important tool to validate that targeted measures are adequate to control microbial growth.

Conclusions
While water authorities have the responsibility of providing water free of harmful levels of Legionella, plumbing staff are tasked with ensuring quality water within buildings or premise plumbing. The consumer also has control in terms of maintaining appropriate water temperatures or utilizing POU purification tools. Studies have shown that POU water filters can be used to eliminate Legionella and other harmful microbial pathogens from water supplies and have been installed in hospital shower and water faucets 6. Proper use of POU treatment devices designed to remove bacteria can prevent the majority of drinking water outbreaks.