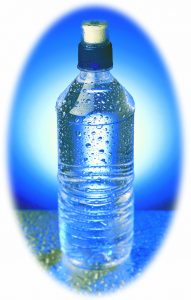 Bottled water is enjoying its strongest growth surge in several years, reaching new volume and sales heights in the US with a record-setting consumption of 10.8 billion gallons and sales of $13.07 billion (wholesale), an increase of 7.3 percent and 6.4 percent respectively. In addition, per-capita consumption was up 6.2 percent in 2014, with every person in America drinking an average of 34 gallons of bottled water last year. Reflecting a clear trend of consumers increasingly choosing healthy, convenient, zero-calorie bottled water, the Beverage Marketing Corporation (BMC) reported that over the past fie years alone, bottled water has increased its ‘share of stomach’ of the overall beverage market from 14.4 percent in 2009 to 17.8 percent in 2014. With 20.9 percent, carbonated soft drinks currently hold the number-one position. According to BMC, if current trends persist, bottled water will be the largest beverage category in the country, by volume, by the end of the decade.

A vast majority of consumers see water as a smart beverage choice and consider bottled water to be healthier than soft drinks, according to findings released in January from an online survey for the International Bottled Water Association (IBWA)–conducted by Harris Poll—of more than 2,000 US adults aged 18 years and older. The poll’s conclusions reflect healthy hydration trends that are driving annual bottled water sales and consumption increases. According to the survey, 96 percent of Americans believe that we should be drinking more water. The poll also found that 95 percent of Americans believe that bottled water is a healthier beverage choice than soft drinks and 92 percent say bottled water should be available wherever other beverages are sold. The survey also showed that 86 percent of consumers already buy bottled water, most often from grocery stores (73 percent) or big-box retailers (42 percent). These finings support research from BMC showing that consumers tend to buy bottled water in bulk from supermarkets or large discount retailers, since they often prefer to purchase bottled water in cost-saving volume.

In today’s on-the-go society, most of what we drink comes in a package. In fact, an estimated 70 to 80 percent of all drinks consumed come in some sort of packaging. Since 1998, approximately 73 percent of the growth in bottled water consumption has come from people switching from carbonated soft drinks, juices and milk to bottled water. And compared to other pack-aged beverages, bottled water containers have the lowest water and energy use of all beverages sold.

Tackling industry issues
In August, the US Food and Drug Administration (FDA) published the first final rules under the Food Safety Modernization Act (FSMA), including Current Good Manufacturing Practice and Hazard Analysis and Risk-Based Preventive Controls for Human Food. This rule revises FDA’s Current Good Manufacturing Practices regulations and adds new requirements for hazard assessments and food safety (HACCP) plans. IBWA has participated in the regulatory process since prior to rulemaking, through commenting on the proposed and supplemental proposed rules and active discussions of the rule at public meetings.

IBWA also continues to track the progress of other forthcoming FSMA rules, such as Food Supplier Verification Programs (FSVP) for Importers of Food for Humans and Animals; Accreditation of Third-Party Auditors/CertificationBodies to Conduct Food Safety Audits and to Issue Certifications; Focused Mitigation Strategies to Protect Food Against Intentional Adulteration and Sanitary Transportation of Human and Animal Food. These rules are scheduled to be published between now and May, 2016. Effective dates for the rules for bottled water will range from one year after their respective publication dates for large companies, to two years for small companies and to three years for very small companies. As it has done for more than three years now, IBWA will continue to provide education for its bottler members and suppliers on implementing and complying with the FSMA rules through a series of live seminars, guidance documents and webinars. IBWA’s Bottled Water Code of Practice, Plant Technical Reference Manual, Audit Handbook and audit program will also be updated to incorporate the new FSMA requirements.

IBWA supports the addition of water on the US Department of Agriculture’s (USDA) MyPlate graphic and earlier this year IBWA provided oral testimony at a US Department of Health and Human Services (HHS) and USDA public meeting regarding the 2015 Dietary Guidelines Advisory Committee’s report. In prepared comments, Tamika Sims, PhD, IBWA Director of Science and Research, applauded the Dietary Guidelines Advisory Commit-tee’s (DGAC) recognition of water’s importance to a healthy diet. “We recommend enhanced messaging on water consumption in the 2015 Dietary Guidelines, including language that promotes drinking water in all forms. Water, including bottled water, helps people pursue a healthy lifestyle and avoid sugar-sweetened beverage consumption,” said Dr. Sims. She also noted that water plays a vital role in supporting nutritional health. “Because 47 percent of added sugars in our diets and 20 percent of our daily caloric intake come from beverages, it is clear that Americans need guidance on how to be more aware of what they drink and to reduce their calorie consumption from beverages.” Research shows that when bottled water isn’t available, many consumers will instead choose a sweetened beverage. Dr. Sims remarked that the US is an on-the-go society that often depends on convenience when making food and beverage choices. Thus, consumption of free water is not always a practical choice for consumers. In cases where free tap water is not available, consumers should be encouraged to reach for bottled water instead of less-healthy packaged beverages.

IBWA is opposing a National Park Service (NPS) policy that allows individual parks to ban the sale of bottled water but not other less-healthy drinks also packaged in plastic: soft drinks, sports drinks, juice drinks and other sugary packaged beverages. IBWA’s position is that this policy denies park visitors the simple option of buying the healthiest packaged drink on the shelf, while at the same time making readily available a broad selection of unhealthy drinks packaged in heavier plastic bottles which use more water to manufacture. According to NPS, since 2011, 20 of its 408 parks have banned the sale of bottled water with the stated intention of reducing the amount of plastic in its waste stream. Yet, there is zero evidence that any waste has been reduced. In fact, the US Department of Interior found numerous shortcomings in NPS’s documentation, execution, monitoring and verification—all requirements of NPS’ own directive for approving and implementing bottled water sales bans. NPS even admitted that none of its parks were tracking the number of plastic bottles in their waste streams or conducting the required analysis of the bans’ effects.

Besides the issue of preventing park goers from being able to make basic healthy beverage purchases, new research shows these types of sales bans have unintended negative consequences. The Unintended Consequences of Changes in Beverage Options and the Removal of Bottled Water on a University Campus, published in May in the American Journal of Public Health, concluded that a ban on the sale of bottled water at the University of Vermont (UVM) resulted in a 33-percent increase in the number of unhealthy sugary drinks shipped and a six-percent increase in the number of bottles shipped to campus and thus entering the waste stream. Researchers noted: “Our study shows that these sorts of policies, regardless of the motivation behind their adoption, may result in the consumption of more calories and more added sugars, a perpetuation of unhealthy dietary choices and, ironically, an increase in plastic waste. Our study clearly suggests that the NPS bottled water sales ban has the potential to undermine efforts to encourage healthy food and beverage choices and may be environmentally counterproductive,” Dr. Rachel Johnson said.

Educating and informing consumers
IBWA released an infographic and video aimed at helping consumers understand that bottled water uses very little of California’s water. Compared to other packaged drinks, bottled water has the lowest amount of water used in production: 1.43 liters per liter, including the contents, according to the Beverage Industry Environmental Roundtable. 8 Things You Need to Know About Bottled Water in California walks consumers through the facts about the amount of water used to make bottled water, an important issue due to the ongoing drought. Thousands of consumer products require water to be manufactured, but few do it as efficiently as bottled water; 100 percent of its contents is intended for consumption. The infographic also notes that the majority of water produced in California stays in California. In addition, all California bottled water companies are subject to all the state’s regulations, taxes, fees, monitoring and inspections. The video also reminds people that in times of emergencies and natural disasters (e.g., floods,earthquakes and wildfires), bottled water is always there when you need it.

IBWA continues to be a proud and active supporter of Drink Up, an initiative of First Lady Michelle Obama and the Partner-ship for a Healthier America (PHA), which encourages Americans to drink more water more often, whether from the tap, a filter or in a bottle.The effort has been very successful. IBWA has long promoted the many benefits of drinking water and the Drink Up partnership is an important and healthful promotional effort that can benefit all Americans.

Bottled water in the US is comprehensively regulated by the FDA as a packaged food product and by federal law, the FDA regulations governing the safety and quality of bottled water must be at least as stringent as US EPA standards that govern tap water. And, in some very important cases, such as lead and coliform bacteria, bottled water regulations are substantially more stringent.

About the author
Chris Hogan is Vice President of Communications for IBWA. He holds an MBA and Master of International Management from the University of Maryland University College and a Bachelor of Science in political science from Northeastern University. Hogan also holds the IOM association and nonprofit executive certification.

About the organization
The International BottledWater Association (IBWA) is the authoritative source of information about all types of bottled waters, including spring, mineral, purified,artesian and sparkling. Founded in 1958, IBWA’s membership includes US and international bottlers,distributors and suppliers. The organization is committed to working with the US FDA, which regulates bottled water as a packaged food product, to set comprehensive and stringent standards for safe, high-quality bottled water products. Be sure to follow IBWA on Facebook, Twitter and You Tube and visit our websites, www.BottledWater.org and www.BottledWaterMatters.com.