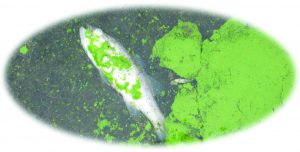 Algal blooms in surface waters peak in the warmer months of late summer and fall. Many species produce harmful toxins, posing a risk to animals, recreational swimmers and drinking water supplies. Surprisingly little is known about the treatment and management of these transitory hazards but new US EPA guidelines provide evidence for broader health concerns.

Toxic algae
Algae are an indigenous part of the ecosystem, found in nearly every soil and water habitat on the planet. A healthy balance in the environment serves as nutrients for other animals and plants. Conflicts between nature and its inhabitants occur when algae increase production and form harmful toxic byproducts. Blue-green algae, also known as cyanobacteria, are often recognized as the typical green slime that forms in swimming pools and ponds. Don’t let the name fool you, however; toxic algae may be characterized by a variety of colors, including red, brown, green, blue and even purple. Some of the many species of blue-green algae naturally produce toxic chemical compounds within their cell walls. Toxin production varies relative to species but also to environmental conditions (i.e., temperature and nutrient loads) that dictate algal growth and death cycles. One of the more commonly associated algal pathogens is Microcystis aeruginosa, which produces a dangerous liver toxin called microcystin.

Harmful levels of toxin are not always correlated with visible algae in the water. This variability makes visible assessments of risk less reliable, as it is difficult to tell when algal toxins are actually being produced and more importantly, when they are released. Algal cells release toxins most efficiently when they are decaying. Thus, efforts to eliminate the algae may actually increase toxin exposures and health risks. Warm, shallow, stagnant or slow-moving waters are most problematic for increased algae and exposure potentials. Waters with increased nutrient loads from fertilizers or other environmental inputs further support algal growth.

Harmful effects
Cases of hospitalized children and pets sickened from algal toxins have been reported this summer, but severe cases are rare. More commonly, symptoms mimic other mild ailments such as headache, diarrhea, sore throat, cough, vomiting, rash and eye irritation. They may go unrecognized and thus, unmitigated. Illness may progress to more serious events like burns, blisters and even seizures and liver failure if exposure is high and/or chronic. Although not well understood, long-term exposures could also lead to cancer.

Growth of algae can occur very rapidly under ideal conditions, resulting in a floating layer of scum on the surface of the water source. Blooms tend to peak in late summer and early fall when temperatures and sunlight are at a maximum, causing problems with drinking and recreational waters. Young children and dogs are the most commonly exposed and most at-risk groups. Anyone exposed to algae-contaminated water, however, is at risk for adverse health effects,including other pets, fish,birds and livestock. Sometimes the first sign of high levels of toxin presence is evidence of fish kill. In humans, exposures occur via multiple pathways, including dermal contact with contaminated water while swimming, inhalation during showering and via ingestion of toxins or whole algal cells in seafood and drinking water. During blooms, drinking water utilities must first monitor for the presence of toxins and then decide how to employ enhanced treatment works.

Occurrence in the US
In the last decade, harmful effects from algal blooms have consistently appeared in news headlines, usually accompanied by a warning of worsening future conditions linked to climate-change models. In recent decades, state surveys have found a high occurrence rate of algal toxins in the US1. A 2006 survey of 23 Midwestern lakes by the USGS found a 91-percent prevalence of microcystins. A 48-state survey by the US EPA found that 30 percent of the 1,028 lakes sampled in the summer months tested positive for microcystins. Results of a national 2012 survey are still pending but expected to reveal a widespread problem.

More recently, in 2011, eastern Lake Erie was severely impacted by an unprecedented algal bloom and became the focus of studies by the National Oceanic and Atmospheric Administration (NOAA). NOAA models predicted that the current 2015 summer will also be among the worst harmful algal blooms for the region compared to the last 100 years2. Minnesota has also experienced severe algal bloom complaints this summer, with several cases of recreational water poisoning reported, resulting in hospitalizations of children and the death of a pet dog3. Although signs were posted to avoid swimming in the region, recreators in the area were reportedly not aware of the risks. In summer 2014, an algal boom on Lake Erie, in the Toledo, OH area, contaminated the drinking water supply of a half-million people beyond treatment capabilities. State representatives from Ohio, Illinois and others took active notice, requesting more collaboration between federal, state and local governments toward understanding the cause and effect of algal contaminants in the environment.

One recent change at the state level has been the appropriation of $1 million (USD) for the development of a cyanotoxin monitoring protocol and equipment for municipalities and many more millions made available for supporting drinking and waste-water treatment infrastructure in Ohio4. New rules targeting reduction of agricultural runoff, which supplies nutrients for enhanced algal proliferation, are expected to minimize future problems, but seasonal temperature increases and warming trends overall work against targeted solutions.

US EPA’s response
Algal toxins are really not well characterized or understood. Their seasonal nature also prevents routine focus on their control. Currently, US EPA does not regulate cyanotoxins in drinking water, which means there is no mandate for their monitoring or treatment. But, they have been added to the federal Candidate Contaminant List (CCL). The CCL identifies potentially harmful waterborne contaminants that are emerging and for which more information is required to determine if interventions are needed.

In June of 2015, US EPA placed more focus on cyanotoxins by issuing a health advisory (HA) for microcystins, listing expo-sure concentrations of concern in drinking water1. HAs are not legally enforceable but do provide guidance for municipalities on levels of concern and potential actions for mitigation that could be adopted. In support of the HA for microcystin, additional documents, including Health Effects Support Document for Microcystins and Recommendations for Public Water Systems to Manage Cyanotoxins in Drinking Water were also released in order to assist municipalities in developing a management plan5.

Based on more current data, the latest US EPA threshold limits vary from the previous 1-µg/L limit of the World Health Organization set in 1998. In addition, US EPA set separate standards for young children who are at increased risk. Maximum levels of cyanotoxins recommended in the HA are 0.3 µg/L for microcystin and 0.7 µg/L for cylindrospermopsin for young children, and for all other ages, 1.6 µg/L for microcystin and 3.0 µg/L for cylindrospermopsin.

POU device solutions
Nutrient runoff impairs more than 100,000 miles of rivers and streams in the US and nearly 2.5 million acres of lakes, reservoirs and ponds. US EPA estimates that between 30 and 48 million people may be exposed to algal toxins via drinking water during seasonal peaks. Numerous surveys by the American Water Works Association, specific states and others, have found microcystins in up to 80 percent (539) of source and treated waters sampled, although often at low levels. Some utilities voluntarily monitor for algal toxins. While inexpensive screening kits are available to determine toxin presence or absence, advanced tools are generally necessary to make effective decisions about treatment needs. Identifying the best treatment scheme is a function of algae type and toxin production mechanisms, which are not easily known. Conventional surface water treatment schemes typically remove intact algal cells with intracellular toxins but dying cells that have released their toxins can still pose a hazard (see Table 1). 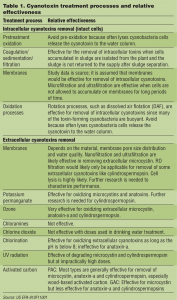 Little research has been published on the use of POU devices for the removal of cyanotoxins. POU technologies designed to remove whole cells, such as RO, are expected to be effective for removal of cellular bound toxins. Carbon filters were found to remove up to 99.95 percent of the toxins, although efficacy varied widely for other POU device types (6). Understanding the multi-barrier water treatment needs for reducing the risk is imperative. The burden for reducing cyanotoxin exposures is shared not just with municipalities but also with agriculture (in reducing nutrient influx in surface waters) and POU water consumers. Identifying the best treatment approach for cyanotoxin removal remains a work in progress as new information becomes available and awareness increases.