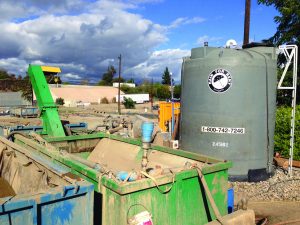 The San Diego Freeway (I-405) in southern California is one of the most congested freeways in Los Angeles County, carrying more than 300,000 vehicle trips daily on some sections. The area population is expected to grow 11 percent by 2040, significantly increasing traffic volume on the freeway. The California Department of Transportation (Caltrans), in cooperation with the Orange County Transportation Authority (OCTA), proposed widening I-405 by adding lanes in each direction to improve travel conditions, which would facilitate traffic flow, interchange operations and enhance road safety to meet state and federal standards. 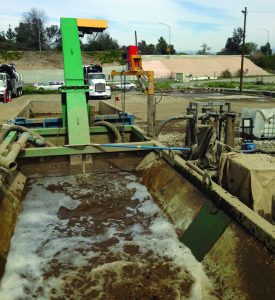 The project
This $721-million design-build project, in addition to adding lanes in each direction, will realign existing on and off ramps, reconstruct or modify 23 bridge and ramp structures, build approximately 18 miles of retaining walls and perform road improvements on adjacent city streets. The entire project, which started in 2013, was expected to be completed within the first quarter of 2015. 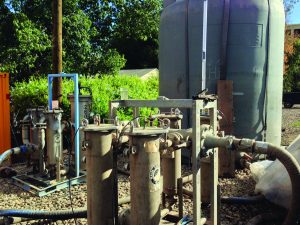 Utility location and excavation challenge
Hydro-excavation (which removes soil with pressurized water) has become a favorite of construction companies working in older, high-density urban environments, as the process is far less destructive and more accurate than traditional excavation techniques. An air conveyance or a vacuum is then used to transfer the soil/slurry from the excavation area to a disposal truck or tank. One of the more challenging portions of the project involves the hydro-excavation required to locate utilities under the newly expanded portion of the freeway and surrounding areas.

A major construction company was selected for the project and chose to use hydro-excavation to avoid potential problems that might arise from unexpectedly hitting any utilities not properly recorded or not located exactly as the maps indicate. This project could not afford delays that might come from accidentally hitting unknown utilities underground.
In this project, the hydro-excavation trucks were filled with a combination of mud and rock. To protect the local ecosystem, the very thick slurry byproduct could not be discharged onsite. At the beginning of the project, the construction company collected the slurry and transported it to an off-site facility for treatment and disposal. This process was completed at a cost of an estimated $3,000 per truck and about 10 truckloads per day were loaded. A solution was needed to reduce costs and to recover the water for reuse by the hydro-excavation equipment, thereby reducing water used from the local water supply. These two goals, in addition to retaining the recovered dirt for use in the project’s backfill needs, were key to choosing an alternative treatment solution. The construction contractor consulted with other companies to develop a system for treatment of the slurry onsite, allowing the company to reuse the extracted water, thereby reducing its monthly treatment costs and its environmental impact by using an innovative polymer and weir tank treatment system custom-created onsite.

Solution
The consulting companies created a new and improved system to dewater the mud, effectively separating the solids from the water. After initial testing, a new dry polymer product was recommended, which produces exceptional results in sludge dewatering. (The dry polymer system used is a proprietary blend of polymers and additives, engineered specifically for dewatering water streams with high levels of suspended solids, in this case, mud. While the actual chemistry is rather complex, the mechanisms at work are not. The basic idea is to pull all of the suspended particles together into large groups, or flocs, which will readily settle out of the water. This is achieved in two ways: the primary polymers, both cationic and anionic, react with particles and agglomerate into small flocs. At the same time, the bulking agent acts as an adsorbent to take up additional contaminants in the water. These components are pulled together by a secondary polymer designed to facilitate settling. The resulting macroflocs are extremely shear-stable and are easily removed from the system.) 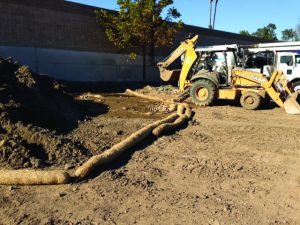 As the dirt-water mix was pumped from the pre-settling tank, it was dosed with the new polymer, using a re-circulating Venturi system to introduce it into the liquid stream. The treated slurry was then continually mixed in a tank that removed solids with a conveyor system. The sediment was flocked by the polymer, then quickly settled to the bottom of the box. As water rose to the top, it was removed and pumped through bag filters to be re-used on the clean-water side of the hydro-excavation trucks. The solids on the bottom were removed from the tank using the unit’s energy-efficient scrapper-conveyor belt system. The dirt that was separated was further dewatered onsite by spreading the solids on a concrete foundation to dry. It was then transported by regular dump trucks to be used elsewhere. The environmental impact was now considerably less, as transportation of the solids was minimized. Every 3,000 gallons of slurry treated yielded approximately 1,800 gallons of reusable water that went back into the hydro-excavation trucks.

Standard rental equipment was adapted to keep the project on track with an engineered custom system. It fit within the tight job-site footprint without jeopardizing system functionality. The treatment area had a footprint of approximately 200 x 200 ft. forall the equipment. The 6,900-gallon poly tank, filters and scraper/conveyer tank system created a custom-designed system on an accelerated time schedule and worked exceptionally well in this application. 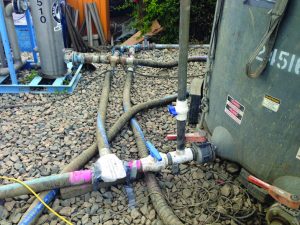 On-site water reuse
The water from the top of the treatment system had minimal turbidity with NTUs in the single digits. This was an added bonus, as the water could be reused in the hydro-excavation process, drastically reducing the need to tap into water resources drawn from the local hydrant. The reclaimed water was reused in the excavation equipment and for dust control throughout the construction site. From a water-use perspective, it was a near-perfect circular water reuse system. This process recovered more than 60 percent of the water used and produced clear water to a level of four NTUs, making it completely suitable for reuse within the hydro-excavation equipment. (Water with higher turbidity risks damaging the sensitive high-pressure pumps used in the equipment.) The tanks were filled, treated and water was pumped off and then treated again. 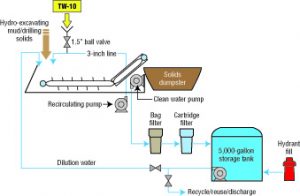 The results
After treatment, solids concentration was improved approximately 25 to 60 percent and easily moved using a backhoe. They were stored onsite and used as backfill on the project. The company saved substantial treatment costs with this new and improved process, while simultaneously minimizing its environmental impact in drought-ridden southern California. The construction company was extremely pleased with the system, realizing savings of more than $1.7 million dollars in just one year, while minimizing the use of clean hydrant water in the process. It was a win-win situtation for everyone.

John Meland, Technical Sales Engineer for HaloSource (manufacturer of HaloKlear), provides design and engineering expertise to support field opportunities. He boasts 25 years of experience in the water industry and a core understanding of industrial water systems, especially filtration hardware and polymer use. Prior to joining HaloSource, Meland worked with CH2O, Inc., GE Water Technologies and US Filter Corporation. He holds a Bachelors Degree in chemical engineering from Oregon State University and is a WQA-certified Water Specialist.

About the companies
HaloKlear, a division of HaloSource, Inc., works with scientists and industry experts to improve water quality around the globe. Its team of chemists, microbiologists and engineers holds more than 100 patents, giving it the power to provide environmentally conscious solutions. HaloSource’s mission is to make water better and help return previously contaminated water into the environment in the cleanest and most natural pure state. www.halosource.com

Kiewit is one of North America’s largest and most respected construction and engineering organizations. The employee-owned company operates through a network of offices and projects in the US, Canada and Australia. Nearly all construction projects are staffed by one or more owners of the company. Kiewit consistently ranks among the top five contractors by Engineering News-Record. www.kiewit.com