Better Water Industries Inc., having successfully and safely treated methane with its Sentry I Open-Air system for gas reduction for years, has gained highly coveted approval from the state of Wisconsin to treat methane in water. 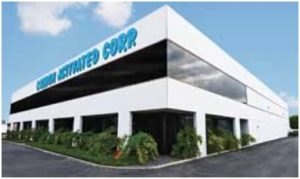 Carbon Activated Corp. announced the opening of its new corporate premises at 2250 South Central Avenue, Compton, CA, 90220. The new facility has 30,000 square feet dedicated to house an ultra-modern office and will include all corporate office staff (inclusive of Sales, Administration, Accounting and Finance and Human Resources). The previous location will be transformed to house a state-of-the-art media testing laboratory and will also be the site for the regeneration plant, in addition to the service and warehouse divisions. The company’s other locations include Stockton, CA; Phoenix, AZ; Buffalo, NY; Ontario, Canada; Bristol, UK; Tianjin, China and Colombo, Sri Lanka.

Name change for US Peroxide

U.S. Peroxide, LLC changed its name to USP Technologies™ in May. The change builds upon the company’s successful track record of 20+ years of providing full-service peroxygen-based programs to the municipal and industrial water treatment market. Changing the name will help to better describe the company’s continued commitment to expanding their technology offering by adding new value-added solutions, while at the same time expanding geographic capability to be able to provide service programs to customers outside of North America.

Calgon Carbon Corporation announced that first-quarter sales for the Activated Carbon and Service segment increased 4.3 percent as compared to the first quarter of 2014. The improvement was primarily due to higher sales of activated carbon products and services for the potable water market in the US, as well as in the environmental air market, principally in North America for mercury removal. These increases were partially offset by decreases in demand for activated carbon products and services for the food, respi-rator and environmental water markets. On May 5, Calgon’s Board of Directors declared a quarterly cash dividend of $0.05 per share, payable on June 15.

The Canadian Institute of Plumbing & Heating (CIPH) and the Mechanical Contractors Association of Canada (MCA Canada) jointly held another highly suc-cessful Parliamentary Day of Awareness in May in Ottaa. Represented by key executives of both associations, they met with several senior officials and Par-liamentarians to enhance the profileof the industry in government circles and discuss two key items of mutual concern: specifically prompt-payment provisions in federal contracts and uniform and harmonized model codes and energy efficiency regulations for Canada.

The Uni-Bell PVC Pipe Association (PVCPA) has published the firstNorth American, industry-wide environmen-tal product declaration (EPD) for water and sewer piping, and it has been veri-fiedby NSF Sustainability, a division of global public health organization NSF International. The EPD was developed in compliance with international environmental management guidelines (ISO 14025) and benchmarks the impacts of seven PVC pipe products across their life cycles. This includes PVC pressure pipe for potable water, reclaimed water and sewer force main systems, as well as PVC non-pressure pipe for storm sewer and sanitary sewer systems. NSF Sustainability reviewed and verified the life-cycle assessment (on which the EPD is based) and EPD documents to ensure that no unsubstantiated claims were made and that the EPD followed all applicable rules.

US EPA and the US Army finalized the Clean Water Rule to clearly protect from pollution and degradation the streams and wetlands that form the foundation of the nation’s water resources. The rule ensures that waters protected under the Clean Water Act are more precisely define and predictably determined, making permiting less costly, easier and faster for businesses and industry. The rule is grounded in law and the latest science, and is shaped by public input. It does not create any new permitting requirements for agriculture and maintains all previous exemptions and exclusions.

As the swimming season kicks off health experts from the US Centers for Disease Control and Prevention (CDC), the Water Quality and Health Council (WQHC) and the National Swimming Pool Foundation (NSPF) have teamed up to launch a campaign to stop people from urinating in pools. To do so, they are busting a couple of colorful myths associated with this clandestine activity. According to a new survey conducted by Survata on behalf of the WQHC, nearly half of Americans surveyed incorrectly believe that there is a chemical that is added to pools that turns a conspicuous color in the presence of urine. The fact is, there is no such dye that currently exists. In the same survey, 71 percent also incorrectly blame chlorine for causing swimmers’ eyes to become red and irritated. In fact, when nitrogen-containing compounds found in urine, sweat and dirt combine with chlorine, irritants are formed. These substances, not the chlorine itself, irritate the eyes, skin and respiratory system.

With unprecedented support from committees, partners and donors, Water For People announced it met its Spring Campaign fund-raising goal of $300,000 (USD). ARCADIS, a long-time Water For People partner, was so impressed by this momentum they decided to up the ante and accelerate donor impact in a big way. Through June 12, ARCADIS matched all monetary donations up to $25,000. This investment accelerated Water For People’s progress toward reaching four million people with access to safe water and sanitation in nine countries.

Krones Andina has built its own training center for the operating and maintenance staffof Krones’ clients at its facility in Bogotá, Colombia, in close liaison with the Krones Academy. In early May, the new training center was inaugurated in the buildings of the Colombian subsidiary. Krones Andina is responsible for providing life-cycle service support in a territory that includes not only Colombia, but also Venezuela, Ecuador, Peru and Panama. The training center’s principal mission is to foster and inculcate soundly based, in-depth knowledge among the clients’ staff and to prepare them for handling new machine technologies.

Severn Trent Plc and Industrie De Nora SpA have reached a definitive agreement for the share sale of Severn’s water purificationbusiness to De Nora. In addition to being known for its high-quality products, De Nora brings very strong engineering and product development capabilities that will enhance the combined offering with innovative and robust solutions for customers around the world. Since 2002, Severn Trent and De Nora have been partners in a successful joint venture, Severn Trent De Nora, which specializes in electrochemical processes for water and wastewater treatment for the municipal, onshore and offshore energy and marine sectors. The transaction, which included this entity, was expected to be completed before summer.

IDE Technologies recently celebrated 50 years of achievement and excellence at a company weekend in Eilat, Israel. Two hundred fifty employees in Israel and their families were invited to the jubilee celebration. The weekend included an evening of tribute to the company’s significant milestone. In a speech to the gathering, CEO Avshalom Felber referenced the company’s many achievements over the years, including helping solve Israel’s water shortage and erecting the world’s largest RO desalination plants. The initial kernel of the desalination initiative started to take shape in 1958 and in May 1965, IDE was officially registered as a desalination company with the company registrar. Since then, the company has been involved in the development and construction of more than 400 desalination and industrial water treatment plants worldwide, delivering three million cubic meters of high-quality water per day.