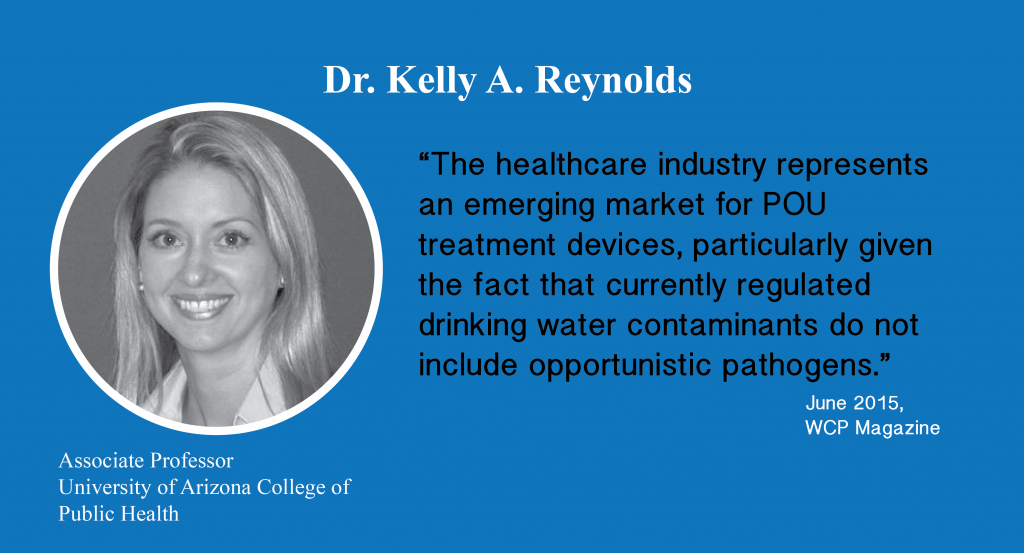 The death of four patients at a Greenville Health System (GHS) hospital in Greenville, SC left many people asking what happened. Problems identified included the presence of an indigenous bacterium, specifically Mycobacterium, in the hospital water supply. A large part of the solution came from the POU water treatment industry. Today, GHS has a stringent protocol for treating their water systems at the point of use but many healthcare facilities are lacking these infection-control procedures. Healthcare sites present an opportunity for the POU industry to educate and improve, or perhaps even save, lives.

A common but deadly pathogen
In March 2014, one patient tested positive for Mycobacterium infection at the Greenville Health System (GHS). While troubling, such infections are generally rare. By May 2014, the atypical bacterial infection was affecting at least 15 patients who had undergone invasive surgeries and hospital authorities recognized they had a problem. Soon after, these cases were recognized as a potential outbreak by the hospital epidemiologist.

Mycobacterium is an opportunistic pathogen, meaning that it typically does not infect healthy persons. The bacteria are commonly isolated from water, soil and dust and are difficult to fully eliminate from the natural environment. Water distribution systems pose a particular exposure risk due to the potential for the bacteria to grow in the system, especially in low-flow plumbing zones or infrequently used fixtures. Mycobacteria are relatively resistant to chlorination, compared to water quality indicator bacteria (i.e., E. coli) and thus, are hardy survivors in the water distribution system.

Signs and symptoms
Immunocompromised populations are more susceptible to infection and adverse outcomes when exposed to opportunistic pathogens. All of the patients who became ill in the GHS outbreak had previous underlying health conditions that were considered serious. Mycobacterium infection, however, was considered a contributing factor to the fatal outcome for at least some of the patients. Many were not aware of a brewing infection until months after being subjected to invasive surgeries. As a precaution, additional at-risk surgical patients (n=180) were notified to watch for signs of infection.

Healthcare-acquired Mycobacterium infections generally manifest as skin, wound or surgical-site infections but may also present in the lungs. Signs of infection and bacteremia are flu-like and include fever, chills, muscle aches and malaise.1 Infections are also evident by swelling or pus formation at the site. Diagnosis is complicated due to lengthy incubation periods (averaging 79 days for the GHS patients) and similarly long laboratory tests that can delay proper diagnosis and evaluation of appropriate treatment. Treatment may be prolonged and involve site drainage and the administering of multiple antibiotics.

Causes and controls
The definitive cause in the Greenville Health System outbreak has not been reported. Tap water used in pre-surgery preparations,including hand washing, however, is one suspected source. Although sterile water is used in and around actual surgical operations, such precautions are not routinely practiced relative to indirect water exposure sources. Other suspected water-related sources included an ice machine. Ice is commonly used to cool blood and organs during surgeries but the ice does not come in contact with the patient. Post-outbreak water samples collected from GHS taps did test positive for the bacteria.

The Greenville Health System outbreak led to a POU treatment application installed in the hospital’s operating room (OR). Other infection control procedures included eliminating stagnant zones in the hospital water distribution network that could promote bacterial growth and contaminate scrub sinks2. ORs associated with infected patients were shut down until July, when environmental samples determined that no detectable mycobacteria were present.

In the months that followed, GHS and the South Carolina Department of Health and Environmental Control (DHEC) identified a broader list of control measures to reduce exposures to Mycobacterium, including:2,3

One notable point in the GHS story is that this particular hospital has strong infection-control programs in place, high hand hygiene compliance rates and low healthcare acquired infection rates—33 percent lower than the national average, in fact2. If a waterborne outbreak can happen at GHS, it can happen anywhere.

Other hospitals are at risk. In 2010, the American Hospital Association listed 6,248 hospitals in the US. During that time, researchers from Central Michigan University conducted a water quality and testing survey of 970 community hospitals, including a mixture of rural and urban locales4. Results indicate that only 66 percent of those surveyed had a written waterborne pathogen plan. Most of the hospitals (94 percent) obtained their water from municipalities and a high percentage of them (89 percent) relied on the municipal water treatment processes for delivering quality water. The majority (92 percent) of hospitals using a well water source (three percent of those surveyed) provided additional treatment within the facility.

When asked how often they water was tested, responses were highly variable (daily, 10 percent; weekly, eight percent; twice monthly, one percent; monthly, 28 percent and yearly, 16 percent). Some facilities (50 percent) have a waterborne-pathogen infection team and are more likely to monitor water and train personnel on waterborne risks. Personnel training program rates were low (30 percent), which may contribute to a lack of awareness and increased risk to patients.

Researchers estimate that three common waterborne infections (Legionnaires’ disease, cryptosporidiosis and giardiasis) cost the healthcare system up to $539 million (USD) each year. Like Mycobacterium, Legionella is responsible for waterborne hospital outbreaks. The CDC estimates that nearly a quarter of all Legionnaires cases are hospital acquired, resulting in a 40-percent fatality rate. On average, a single hospitalization case from Legionella costs $34,000.5 HealthLeaders Media reports concern relative to the numerous sinks and showers in individual hospital rooms that are not frequently used, creating an end-point stagnant zone for tap water and the potential for bacterial regrowth6.

Conclusion
The healthcare industry represents an emerging market for POU treatment devices, particularly given the fact that currently regulated drinking water contaminants do not include opportunistic pathogens. Crossing the healthcare continuum from hospitals to nursing homes, rehabilitation facilities, dialysis clinics, homecare, etc. there are large populations of immunocompromised persons at increased risk for waterborne infections that could be greatly minimized by POU treatment.