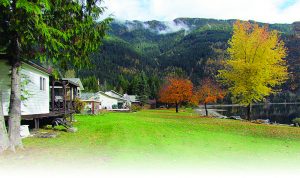 Thousands of small public water systems are in operation throughout North America and most face serious challenges for financing, operating and maintaining multi-barrier treatment systems that will provide safe drinking water to the communities they serve. According to the US EPA, more than half of US public water systems are small and serve fewer than 500 people. Data from Statistics Canada suggests that about 15 percent of Canadians (about five million people) are served by small water systems or private wells. Too often these systems operate with inadequate treatment, or in some cases, no treatment. For many of the communities in this situation, boil-water advisories have been in place for years, or even decades, and residents face the constant threat of illness caused by waterborne pathogens.

POE solution gaining acceptance for small water systems
Until recently, the only treatment option that regulations would allow for small water systems required construction of central treatment plants—an impossible prospect for these communities due to the cost and complexity of such systems. But in recent years, POE water treatment systems are being increasingly accepted by regulators in Canada and the US as an effective means for small water systems to comply with treatment requirements and ensure an adequate, reliable and safe supply of potable water. 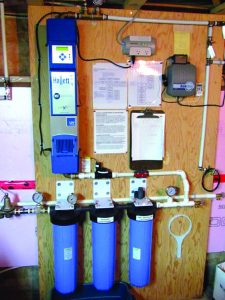 One example of a successful POE public water system was recently commissioned in the Kootenay region of British Columbia, Canada. Valhalla Lakeside Resort, a remote mountain community, eliminated the need to install a large, costly central water filtration and chlorination system by opting to equip each building with its own POE system comprised of prefiltration and UV disinfection. The systems have been operating since June 2012 and in addition to providing a reliable, cost-effective disinfection, have enabled the community to end its boil-water advisory, which had been in effect for more than 10 years.

“There are about 3,500 small water systems in British Columbia and most are serving only one to 15 connections,” said Denny Ross-Smith, Executive Director of the Small Water Users Association of BC. He added that many—especially those relying on surface water—are facing increased inspections and enforcement. The action follows a report by the BC Ombudsman in 2008 that recommended BC regional health authorities work to reduce the number of boil-water advisories in their regions and bring water systems into compliance with the Drinking Water Protection Act and Regulation. “Quite often, the operators of these systems don’t have the money to hire engineers and don’t know who to go to for help in designing and implementing a water treatment system.”

Lower capital costs for POE vs. central plant
For Valhalla Lakeside Resort, Secretary Lou Lalonde was instrumental in bringing the POE systems to the community. “We worked closely with BC Interior Health to develop a treatment solution that would comply with drinking water requirements and the wishes of the community,” he said. He noted that many of the property owners were opposed to chlorination, but recognized the need for a treatment system to end the boil-water advisory and comply with drinking water regulations.

“Funding is the major challenge for small communities that want to install a treatment system,” said Ross-Smith. “In BC, large systems are frequently eligible for provincial and federal grants that will pay for up to two-thirds of the cost of construction, but small systems don’t have access to those funds. POE systems are viable solutions in some cases and can be installed into existing developments for a fraction of the cost of a central plant, which could easily cost hundreds of thousands of dollars.”

Lalonde concurs that Valhalla Lakeside Resort would not have been able to afford the costs to plan, build or operate a central water filtration and chlorination system. For them, POE treatment systems were the ideal means to ensure clean, safe water for the community at an acceptable cost and with operating requirements that they could handle. Moreover, some homes are only occupied seasonally, which means homeowners can shut down their POE systems when they are away and the community doesn’t need to support additional capacity in a central plant that would be unused for a significant part of the year.

“The systems in operation at Valhalla Lakeside Resort are identical to those that are used by large, central municipal water treatment plants and provide the same high level of treatment, control and monitoring,” said Kerry Anne Sheehan of Gentis Water, representative of the equipment supplier/ manufacturer, in BC. “The smart technology built into the systems provides many advantages over conventional UV systems at a price that is competitive for residential or institutional applications.”

Pilot study proves POE efficacy
A key step in obtaining approval for the POE systems was to prove that the proposed multi-barrier design could do the job. Valhalla Lakeside Resort draws its water from the nearby Bonanza Creek, which means that its treatment system must comply with provincial treatment objectives for surface water or groundwater at risk of containing pathogens (GARP.) Such systems are expected to achieve at least the following standards:

Lalonde installed the first system in his own home in 2011 for a year-long pilot study. The study collected data about seasonal variations in water turbidity and the performance capabilities of the system. After reviewing the performance of the system, Interior Health approved the POE solution for the community and the systems were installed in 16 homes and at the campsite. Each system is rated to treat up to 15 gpm and is comprised of a bag filter, a one-micron nominal cartridge filter, a one-micron absolute cartridge filter and UV for disinfection. 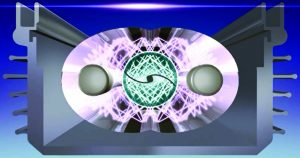 UV systems incorporate patented technology to deliver a UV does that is 2.4 times greater than that of conventional systems. Elliptical reflectors enable UV light to target pathogens from 360 degrees to eliminate the risk of shadowing.

Virtually maintenance-free operation
“The systems were ideal for us and provide many important features,” Lalonde explained, noting the automatic shutoff valve, computerized alarm, fast, easy lamp replacement procedure and self-cleaning capabilities. “The self-cleaning capability of the system means they can handle the high minerals and hardness in our water. It works so well that we don’t need water softeners and haven’t had to clean any scale from the quartz sleeves.”

The UV disinfection systems selected for the project are built with patented technology, which provides several advantages over conventional UV systems in performance and operation. It incorporates two proprietary, high-output UV lamps that are mounted in air, rather than in the quartz sleeve. This design prevents overheating of the lamps, which can reduce UV dose, and also makes lamp changes fast and simple since the unit does not need to be drained. Elliptical reflectors encircle the lamps to re-use the energy from the lamps and deliver a UV dose that is 2.4 times greater than that of conventional systems.

“UV systems are equipped with dual UV sensors that continually monitor three critical performance parameters: UV dose, UV lamp intensity and net UV transmittance,” said Sheehan. “The design means that the system can instantly diagnose sensor data to determine if an alarm is caused by an issue with the UV lamp or by poor water quality conditions. This is a critically important feature for small POE systems because it helps water managers quickly understand what is causing an alarm and take immediate action to remedy the situation and protect water users.” 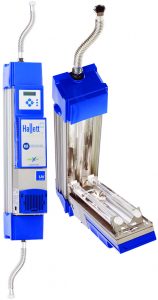 According to Lalonde, the POE systems have performed very well since commissioning and require very little maintenance— only filters and UV lamps have required attention at regularly scheduled maintenance intervals. The systems have also handled the hard water exceptionally well due to an automatic, mechanical cleaning system that enables the units to effectively treat water with up to 50 grains (855 ppm) of hardness without softening. A stainless-steel wiper-blade system automatically cleans the quartz sleeve from the inside, minimizing biofilm and scale from forming and reducing the need to decommission the system for cleaning with dangerous acids.

Conclusion
The community can accommodate up to 28 buildings and as new ones are built, each will be fitted with the filtration equipment and the UV system. The success of the POE system at the resort demonstrates that UV technology can provide small water systems with an affordable and easy-to-operate POE treatment option that can protect public health, achieving regulatory compliance and eliminating the need for a costly, complex treatment plant.

About the author
Rick VanSant, an entrepreneur and angel investor, has served as President and CEO of UV Pure Technologies since 2002. He also serves as a Director and Chair of the Governance Committee of WaterTAP, Ontario, Canada’s Water Technology Acceleration Project– a provincial corporation created to promote the development of the province’s water and wastewater sectors. Prior to UV Pure Technologies, VanSant founded and/or led several public and private companies, and has served as a director of both, as well as not-for-profit organizations and industry associations. He also was a member and Director of the Young Presidents’ Organization, in Toronto. VanSant holds a degree in astro-geophysics from Colgate University, a Masters of Education from St. Lawrence University and is a graduate of the University of Toronto’s Rotman School of Business’ Institute of Corporate Directors program.

About the company
UV Pure develops and manufactures advanced UV water disinfection technology. The company has an installed base of over 14,000 applications in North America, LATAM and ASEAN countries and the European Union. UV Pure has been recognized globally for its technology leadership, including Frost and Sullivan Best Practices awards for leading water and wastewater treatment technology in North America; as an Artemis Project Top 50 Emerging Clean-tech Company; a Going Green Global 200 Clean Tech Company and winner of the Canadian Drinking Water Association award for innovation. In addition, an aerospace version of UV Pure’s technology was chosen by Boeing to disinfect drinking water on board each of its new 787 Dreamliner aircraft.

About the product
UV Pure Hallett 15xs disinfection systems are built with patented Crossfire technology, which provides several advantages over conventional UV systems in performance and operation. Crossfire technology incorporates two proprietary high-output UV lamps that are mounted in air, rather than in the quartz sleeve. This design prevents overheating of the lamps, which can reduce UV dose and also makes lamp changes fast and simple since the unit does not need to be drained.