Several communities are still actively taking action to regulate self-regenerating water softeners (SRWS) to reduce salinity levels in wastewater, which in turn, is causing high water treatment costs or discharge issues. The most publicized has been the Los Angeles Sanitation District’s (LA SAN) ban on the installation of SRWS and the mandatory removal of all SRWS in their Santa Clarita sewer shed. Other areas include the Inland Empire Utility Agency (IEUA) and the recently adopted ban on new installation in Hollister, CA and Scottsdale, AZ’s program offering rebates to remove a SRWS, replace a SRWS with an exchange tank or upgrade an old SRWS with a high-efficiency model.

The Pacific Water Quality Association (PWQA) has talked about these programs and has considered a study to evaluate the degree to which the programs have achieved their stated objectives. For example, some in PWQA claim that the LA SAN program has failed in its objective to lower the chloride level to the target in their discharge permit.

As prelude to any decision, PWQA undertook a fact-finding mission to learn what has actually happened. To do so, the three governmental entities mentioned above were contacted—Hollister’s ordinance was just enacted so no data is available yet.

Santa Clarita, CA
Phase I of the Santa Clarita Rebate Program began on November 30, 2005. From that date until March 31, 2007, residents were eligible for a rebate of either $100 or $150 if they replaced a SRWS with a qualified alternative unit.

Phase II of the rebate program began on April 1, 2007, which offered higher rebate amounts. Residents who took the rebate in Phase I were made ‘whole’ with an additional rebate payment so that their total rebate was equal to those who waited until Phase II (in Table 1, the total rebate amount is reported in the year the first check was sent). During the voluntary removal program from April 1, 2007 to December 31, 2008, the district provided rebates for 100 percent of the reasonable value of the AWS. In the November 4, 2008 general election, voters in Santa Clarita approved an ordinance that spelled out further phases to remove SRWS, including another rebate plan. Since January 1, 2009, LA SAN has provided rebates for 75 percent of the reasonable value of the SRWS. All SRWS were required to have been removed as of June 30, 2009, the end of the six-month grace period. In addition to the rebates, the district also provided free removal and disposal of the units.

In an effort to further lower chloride levels, LA SAN has begun a home-inspection program to identify remaining SRWS. To date, 200 have been identified. Fifty percent of the homeowners contacted have refused LA SAN access to their home. (The agency continues to offer any rebate that a homeowner is eligible for under the 2007 Phase II program.) LA SAN has not issued any fines as allowed in the ordinance passed in November, 2008. It has reported that 8,100 rebates have been issued to date. Table 1 indicates the average rebate paid out by year since the program was enacted. $6.5 million has been spent on the entire program including staff, public education, administration, etc. LA SAN reports that removal of these SRWS has resulted in a 55- ppm reduction in chloride levels. It also reports that source water chloride levels are up substantially from the baseline when they embarked on the SRWS removal effort. As a result, they are still above the discharge limit needed to comply with their discharge permit. LA SAN also is not certain how many SRWS remain in service in the community.

In summary, removing the 8,100 SRWS has not enabled LA SAN to lower chloride levels to meet their National Pollution Discharge Elimination System (NPDES) permit. The agency is now making plans to build a membrane plant to treat a portion of the wastewater and blend the product water back into the overall waste stream so the blended water will meet the new NPDES permit level. Because of the 55- ppm reduction (attributed to the removal of SRWS), LA SAN will treat a smaller portion of the water at the Valencia Plant than if the reduction had not been achieved. LA SAN’s original claims were that this course of action would eliminate or greatly reduce the need or cost of secondary water treatment at the plant level. We are unable to determine how much better that number would be without the change in source-water quality.

Inland Empire Utility Agency
The IEUA passed an ordinance in 2012 banning the installation of new SRWS and offering rebates to remove existing SRWS. In addition to the ordinance, the agency asked each local utility to adopt an ordinance mirroring the IEUA requirements. Its objective, apparently, was to create redundant uniform standards. Currently, four utilities have adopted the mirroring ordinance:

Three have not adopted the ordinance at this time:

IEUA believes it has the authority to enforce the ban even without the communities enacting their own ordinance. To date, 700 rebates have been issued.

IEUA and the participating utilities are doing the following to control new installations of SRWS:

Thus far, IEUA has done nothing to try to limit salt sales. The agency is working through realtors to inform sellers and buyers about the rebate in an attempt to get a previously installed SRWS removed when a home is sold. The time may come, however, when having a SRWS in an area with a ban in effect will be a selling point. 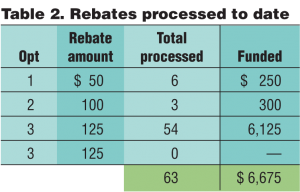 Scottsdale, AZ
Scottsdale has launched a program to reduce salinity in their wastewater because the municipality is having difficulty meeting the specification for TDS and sodium in the reclaimed water it is contracted to deliver to golf courses. The city reports that it is facing an $80-million capital upgrade to the water reclamation plant and that upgrade will cost $6-8 million a year to operate. Scottsdale also reports that SRWS are adding 400 ppm to the TDS of wastewater entering their water reclamation facility. 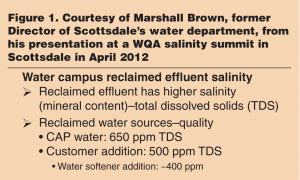 In response, Scottsdale has enacted a three-tiered program of rebates to homeowners who want to participate in the program.

Conclusion
We all realize the issues and challenges high TDS water causes for downstream users of recycled water. It is too early to tell if these programs will achieve their desired objectives. To date, only LA SAN has monitored TDS in wastewater to quantify the results. IEUA and Scottsdale indicate that their programs are too new to see results yet. The challenge for the industry is to determine how we respond to reduce the impact of SRWS on wastewater TDS. Will ultra-high efficiency SRWS lower salt discharge enough? What other salt-source control can we help accomplish? What does the future of our industry hold in terms of new products or services? Please bear in mind, some of the material in this article is author opinion, formed during the acquisition of available information.

About the authors
H. Martin Jessen, Rayne Water Corporation and Pionetics Corporation and Michael T. Mecca, Performance Water Products, Inc., are both Past Presidents of the Pacific Water Quality Association and have been intimately involved with the softener issues and bans in the West. Their respective companies are involved in the manufacture and assembly of ultra-high efficient SWRS and purification devices and several Rayne Water dealers provide exchange tank soft-water service.