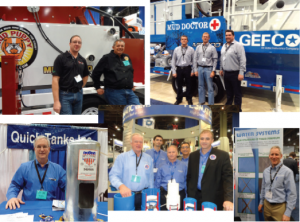 It was good weather and great company in Las Vegas, NV for the 2014 National Ground Water Association’s (NGWA) annual convention and tradeshow, a bright spot in what is otherwise an overcast season. Attendees were well pleased with the layout and in spite of some locations not normally being optimal, the display of drilling rigs throughout the cavernous hall served to drive traffic everywhere. A total of 302 exhibitors, 1,898 exhibit staff and 3,347 visitors took advantage of a jam- packed schedule of events, including seminars that were relevant to multiple segments of the water industry, live NGWA TV talk sessions, receptions and a lot of booths to visit. Visitor traffic on Wednesday, the opening day of the trade show, was certainly brisk. Although Thursday saw lower attendance, there were still a considerable number of optimistic vendors and visitors traversing the trade show floor. Attendance at this year’s event increased a whopping 42 percent above last year!

Overall impression of the groundwater industry over the last year was mixed, with a few exhibitors expressing a somewhat guarded view of how things stand and perceptions of what their 2015 prospects would bring. That didn’t dampen the enthusiasm the greater percentage of exhibitors and attendees expressed. On the whole, most believed that there was growth in the marketplace in 2014 and more could be expected in the upcoming year. There was a prevalent opinion that the economy, though still sluggish, was finally beginning to show good signs for business. There was a broader range of businesses represented, showing a marked increase in market crossover, including those promoting solar pumps, technology breakthroughs, even comfort vendors offering massages with TENS units in multiple locations. 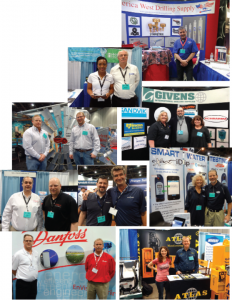 Attendees took advantage of the many presentations, which were well done, comprehensive and insightful for a broad audience of specialists from different segments of the water industry. From drilling, with it’s many suppliers and distributors to monitoring, technology and treatment, nothing was left out. Exhibitors represented a wide variety of disciplines and categories, from owners and operators to manufacturers and distributors of everything associated with water.

Addressing regulatory issues
Collaboration was an evident result of the crossover into vertical markets that has taken place during the recent recession and unbearably slow recovery. Just as water treatment dealers, manufacturers and distributors have extended their reach into other, larger markets, so too have drillers taken advantage of adding water treatment to their portfolio of offerings. In addition, businesses and associations have been working together to advance their respective industry segments, though more needs to be done for the on-the-ground well drillers and suppliers. Focused primarily on the rural and small public water systems and commercial enterprises, the man on the street so to speak hasn’t yet been heard by the regulatory agencies and legislative elements that heavily impact the groundwater industry.

NGWA, the Water Systems Council (WSC) and the Water Quality Association (WQA) have made concerted efforts to rectify this with additional lobbying on behalf of this under-served business segment. Active participation in promoting the Water Supply Cost Savings Act (HR 5659) by the three organizations was highlighted in a spirited presentation by WSC’s Margaret Martens. HR 5659 seeks no funding and offers a more efficient and economic means for communities to achieve compliance with regulatory requirements through installation of household water wells rather than long-pipe centralized distribution for areas of 3,300 or fewer. Projects already completed by the Water Well Trust have noted cost reductions of up to 79 percent versus huge cost estimates for municipal infrastructure installations. Martens asked seminar attendees to make comments and lend their support through a grassroots campaign to enhance passage of the legislation. While tweaks are still being made, the bill should be re-introduced in late January. 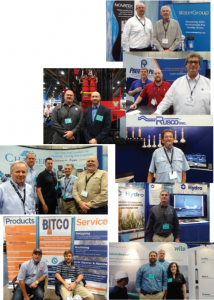 Mark Unger, CWS-VI, WQA’s Technical Manager, offered an overview of the water treatment industry and how it relates to the groundwater in- dustry. He noted that new-home sales are showing improvement and the commercial/food water treatment markets are also rising. Industrial and municipal water treatment has yet to recover. Unger also explained the mission, directives and efforts of WQA as well as the benefits of member- ship. He stressed the cooperation between WQA and NGWA in lobbying efforts and noted an increased effort to inform and educate Congress would continue.

Todd Krause, PE, Northwest Water Systems addressed the 10-20 percent of situations in which normal treatment options for arsenic, iron, manganese and hydrogen sulfide don’t work. His lively and informative presentation covered a host of treatments, including chemical filtration, physical filtration and adsorption technologies for a variety of situations in which accepted methodologies have failed. Krause noted that in five to 10 percent of extremely difficult-to-treat cases, there are common troublemakers: tannins, silica, oxidation state, pH and comically, voodoo. To effect positive treatment, he urged the audience to learn more about the water being treated and to partner with or call in a treatment specialist without hesitation.

Ross L. Oliver Award winner W. Richard Laton, PhD, PG, CHG, CPG of California State University-Fullerton took time af- ter the Opening Session to explain the Sand-Tank Flow Model, a teaching tool for the hydrologic cycle that was set up at NGWA’s main booth. Several visitors mentioned that they used it in training as well as educational opportunities at local schools. NGWA Director of Public Awareness Cliff Treyens explained that he also had one of the models and they were available from the Geology Club at Western Michigan University. 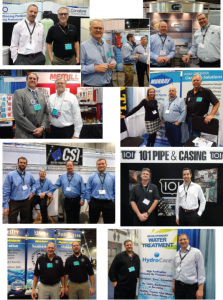 Upcoming events
The resounding success of NGWA 2014 was noted by a large percentage of attendees voicing their enthusiasm for the next event and hoping for another big show. In 2015, the annual convention will be held in Las Vegas, December 15-17. For 2016, NGWA will co-locate with the Irrigation Association (http://www. irrigation.org/) in Las Vegas, December 6-9. Start planning now for next year and we hope to see you there!