In the fluid treatment industry, a skid is typically a steel pallet modified to support and contain various treatment technology components. This assembly is then called a ‘package.’ Total treatment systems may consist of several skids placed in line (a train). For example, in most water/wastewater treatment applications, the treatment train is composed of three skids: pretreatment, primary treatment and post treatment. 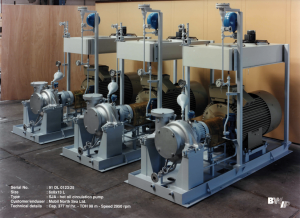 Most treatment technologies can be skid-mounted.

Exceptions include large tanks, clarifiers and other similar large units. Very large systems such as reverse osmosis are usually bolted to the floor with a surrounding water dam and floor drain. A typical skid package could include:

Pretreatment
The pretreatment skid contains the components required to ‘condition’ the water. This could include filtration, pH adjustment, other chemical feed, softening, etc. Its function is usually to protect the technologies in the primary treatment skid. A good example is reverse osmosis treatment, where the RO membrane must be protected from excessive fouling. If no downstream treatment is required, the pretreatment skid could be stand-alone.

Primary treatment
The primary treatment skid contains the technologies necessary to generate the water quality requirement for the specific application. This could include reverse osmosis membranes, for example. If the quality requirement exceeds that produced by RO only (high-pressure boiler feed, for example), the RO unit could be followed by an electrodeionization unit.

Post treatment
The post-treatment skid contains the technologies required to store, distribute and, if necessary, restore the water quality to that produced by the primary treatment skid. The higher the ionic purity of a treated water supply, the greater its tendency to dissolve materials into which it comes into contact, such as pipe and tank walls, pump materials, etc. These dissolved and suspended contaminants must be removed as part of the post- treatment skid operation.

Clean-in-place
Another skid-mounted system commonly employed is the clean-in-place (CIP) system. This is used to clean and disinfect RO and other membrane-based systems. It usually consists of a storage tank with heater, a filter, pump and the necessary piping/ tubing, valving, controls and instrumentation. Often, everything (including the tank) is skid-mounted to facilitate moving the entire system to the location requiring treatment. Skids and packages constitute an important and rapidly growing segment of the fluid treatment industry.

To Solve Global Water Scarcity, We Need to Get More Serious About Desalination

There’s Gold in Them Thar Waters