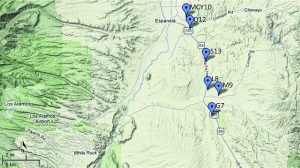 Arsenic’s reputation for toxicity precedes it and the presence of elevated arsenic in well water gets the attention of customers. Inorganic arsenic is classified by US EPA as a human carcinogen and arsenic is at the top of the ATSDR’s Priority List of Hazardous Substances (2013). The list is not a ranking of the most toxic substances, but rather a prioritization of substances based on a combination of their frequency, toxicity and potential for human exposure.

But advising customers how to remediate arsenic in well water is more problematic than with other contaminants because not all arsenic treatment techniques are always applicable to all arsenic. Presented below is a case study of our company’s experience with arsenic, its speciation and how the research project conducted did not really change how the company advises customers with elevated levels of arsenic in their well water.

Arsenic is colorless and odorless and can enter groundwater through the erosional breakdown of arsenic-containing rocks, minerals and ores and by runoff into surface and groundwater from commercial or industrial processes and mining. Historically, arsenic was widely used in pesticides. The current most pervasive use of arsenic is in wood preservatives.

How is arsenic distribution in groundwater controlled?
The origin of arsenic in groundwater in northern New Mexico is more difficult to explain than other contaminants that occur here and especially so in comparison with the close correlation of granitic basement rocks with fluoride and uranium occurrence. The origin of arsenic in this area is believed to be a combination of weathering and the mechanical and chemical breakdown of volcanic rocks (which are abundant in the nearby Jemez Mountains) and from upward migration by hydrothermal fluids along the Rio Grande Rift, which controls the present-day course of the nearby Rio Grande River.

What is the drinking water standard for arsenic?
In its most recent move to reduce the arsenic maximum contamination level (MCL), US EPA originally proposed an MCL of 0.005mg/L or 5μg/L (micrograms per liter or parts per billion, ppb) and took comment on options as low as 3μg/L. The agency elected to set the standard at 10μg/L, higher than the technically feasible level of 3μg/L. It believed that an MCL of 10μg/L established an enforceable regulation for arsenic in public water supplies, based on the best available science to prevent potential health problems in consideration of treatment costs, benefits and the ability of public water systems to detect and affordably remove contaminants using suitable treatment technologies. The maximum contaminant level goal (MCLG)—a non-enforceable public health goal—was set at zero for arsenic.

Lowering the arsenic MCL to 10 μg/L has already imposed financial hardships for struggling communal water systems, which are typically underfunded and must apply for government loans or grants to achieve US EPA compliance. Because so many communal systems are out of compliance, the role of water treatment professionals in educating system connection subscribers about arsenic remediation is more important than ever. Lowering the MCL to 3 ppb seems unimaginable at this time.

As an aside, states may set more stringent drinking water MCLs than those set by US EPA. New Jersey did so by lowering its MCL for total arsenic to 5μg/L, effective the same date (01/23/06) that US EPA lowered its MCL for total arsenic concentration from 50 to 10 ppb. New Jersey also extends the MCL to include private wells and requires that arsenic levels above 5 μg/L be disclosed in real estate rentals and sales. Increasing well water chemistry awareness and treatment requirements in real estate transactions is commendable.

Advising customers with elevated arsenic levels and arsenic species
Because there are no US EPA arsenic standards that apply directly to private wells, the drinking water standard of 10 μg/L is applied by extension as a guideline for assessing private well water chemistry. But it is not so simple as recommending a drinking water RO system. Our company policy is to not encourage our customers to speciate arsenic, because it is an expensive test and some water chemistry literature indicates that arsenic may shift between the two major valences with only minor variances in groundwater chemistry. We had an idea that we could more knowledgeably advise our customers about arsenic remediation if we ourselves knew more about the distribution of arsenic species present in northern New Mexico groundwater. We then designed an arsenic speciation research project to sample and test wells known to have high arsenic concentrations.

Arsenic and its speciation in the Española Basin, northern New Mexico
The company proposed and gained approval to conduct an arsenic speciation project with financial assistance from the New Mexico Small Business Assistance program at Los Alamos National Laboratories (LANL). The company has participated in five previous water research projects with LANL (and again appreciates the opportunity to work with the nearby world-class laboratory and its staff of aqueous geochemists).

Six sample sites from the regional well testing program were identified and we sought wells with geographic separation, complex water chemistry and with a range of total arsenic concentration levels (from 2.1 to 18.2μg/L total arsenic in the sample set). The study area is located in northern Santa Fe County, north of Santa Fe, south of Espanola and east of Los Alamos, New Mexico (see Figure 1).

Three unfiltered samples were collected from each of the six wells. Field pH and ORP measurements were measured and recorded at the time of sampling. One unpreserved sample set was transferred to LANL for a complete chemical analysis by the Earth and Environmental Sciences Division (see Table 1). As part of the project, the LANL lab tested 44 analytes and generated Piper diagrams (major ion composition), Durov diagrams (major ion composition, TDS and pH) and Stiff diagrams. 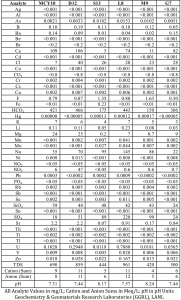 Table 2 is the compilation of the total arsenic and speciation results and also includes the field pH and field ORP data. There was some variation between the results of the two labs that measured total arsenic. But the speciation results are more problematic. Speciation was not successful for the three samples with relatively low levels of total arsenic (2.1-6.1 μg/L) and successful for the three tests with total arsenic levels at or above the arsenic MCL (10.0 -22.0 μg/L), with two of the three samples (L8 and M9) testing 98 percent As (V) and one sample (S13) testing 88 percent As (III). 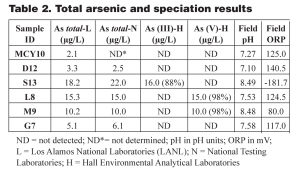 Lacking additional information, either about the well (depth to water, lithology, thickness of producing zone, water chemistry when drilled, etc.) or its geologic setting with respect to possible faulting or the lateral extent and connectivity of the aquifer, the results were unexpected. But field data and water chemistry parameters do provide a possible explanation. Sample S13 was the only sampled well with reducing groundwater (field ORP result of -181.7 mV; all other ORP values were positive), field pH of about 8.5, the highest dissolved iron concentration and the lowest nitrate concentrations among the six samples.

Summary: practical applications of arsenic speciation
How customers react to high concentrations of arsenic in well water is highly variable. Some will listen when told that their primary concern should be in getting arsenic out of their drinking water. Others will say that they feel uncomfortable bathing in arsenic and want it removed from all their water with whole-house arsenic remediation. And then there are those individuals who don’t worry at all and comment that people pay good money to enjoy the arsenic soaking pools at nearby Jemez Springs and Ojo Caliente. There are a number of different treatment techniques suitable for arsenic remediation, but we have to take into account the practical considerations that many well water customers live in remote locations, are challenged by the oversight and maintenance requirements for some systems and are increasingly inclined to eliminate salt-based systems from their lives.

For customers who want arsenic treatment for drinking water only, that means a certified RO drinking water system with a supplemental arsenic filter that removes both species of arsenic and a meter that shuts down production when calculated filter exhaustion is achieved. For customers who opt for whole-house arsenic removal and may not need or want softening (ion exchange), which can be used in conjunction with anion exchange to remove arsenic, we recommend a self-contained arsenic adsorption system, which effectively removes arsenic, does not require backwashing and for which the exhausted media can be recycled or discarded as TCLP-approved, non-hazardous solid waste. Customers who select this option also commonly elect to add a drinking water system for other contaminants that may be present.

Something we learned from this arsenic speciation project and previously did not practice, is that in areas of predictably high total arsenic concentrations, testing for ORP, in addition to the comprehensive water chemistry, is an excellent predictive tool and may be an indirect indicator of As (III). Whereas this particular research project did demonstrate the challenges and unpredictability of arsenic species, it really did not affect company rationale in advising customers about arsenic. We will continue with the conservative approach we have always practiced of advising customers to assume that higher levels of total arsenic (in excess of the current MCL) just might be predominantly As (III).

About the author
Stephen Wiman, PhD has a background in geology and is the owner of Good Water Company, Santa Fe, NM. He is member of the City of Santa Fe’s Water Conservation Committee and writes a monthly column, Our Water Quality, for the Santa Fe New Mexican HOME Real Estate Guide. He may be reached at (505) 471-9036 and [email protected]

About the company
Good Water Company has been the leader in designing, installing and servicing residential, commercial and industrial water treatment systems in Santa Fe and throughout northern New Mexico since 1988, specializing in problem well water. The locally owned company offers superior products and configures them in multiple-component arrays. The company bases its efforts on integrity, scientific principles and service after the sale. One prominent local real estate broker commented: “Good Water Company makes it possible to live where we want to live.” As a company that specializes in treating problem well water, we make it our business to know about geographic trends of contaminant occurrence. Our policy, because we are not qualified to offer medical or health advice about chemical constituents in water, is to refer customers to the websites of the US EPA and CDC , including the Agency for Toxic Substances and Disease Registry (ATSDR).