Bringing Arsenic Down to Safe Levels in Your Water 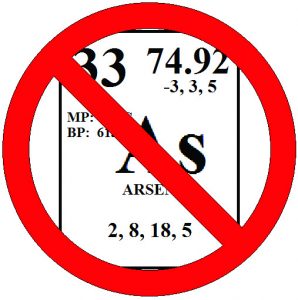 An increasing awareness of arsenic
The maximum contaminant level (MCL) for arsenic in drinking water was reduced from 50 to 10 ppb by the US EPA in 2006. There was a lot of opposition to making the change, particularly by municipal water suppliers that would have to bear the brunt of the costs. Up until all the publicity on arsenic and its harmful effects, most people were unaware that it was even prevalent in their water supply. Ongoing studies now are showing that inorganic1 arsenic found in many water sources is 17 times more toxic than originally thought and raises health issues far beyond the initial evaluation studies that only addressed cancer.

There will still be those consumers who drink water well within the MCL limits who will eventually die from cancer or some other malady brought about by the long-term consumption of arsenic from their municipal supply.

Sources of arsenic
Arsenic is a naturally occurring substance that is found throughout the Earth’s crust and groundwater. On average, there is about 5 ppb present in the soil, up to 0.1 μg/ m3 in the air we breathe (a μg is equal to one millionth of a gram and represents 1 ppb in a liter of water) and 2-3 ppb in your water. Food grown in soil containing arsenic and irrigated with water containing arsenic may contain 100 ppb of arsenic. The total intake from all sources is about 50 μg per day2 or the equivalent of drinking five liters (1.31 gallons) of water at the MCL of 10 ppb. If a diet includes generous servings of veggies and fish or one lives downwind from a coal-fired power plant, exposure may be several times that level. Food is the largest avenue of exposure; however, arsenic from fish tends to be organically bound and is more readily eliminated by the body. It does not pose a major threat, according to the World Health Organization.

There are over 150 different minerals containing arsenic that reside in soil. This makes avoiding arsenic exposure almost impossible. Fortunately, dermal contact does not pose much danger because most arsenic compounds are not well absorbed through the skin.3 Children on playgrounds raise special issues, not because of dermal exposure but because kids tend to eat dirt or things that touch dirt.

Arsenic is poison, always has been, always will be
Compounds of arsenic were recognized as highly toxic long before arsenic was even recognized as an element in 1649 (by Schroeder, a German pharmacist). Nero used arsenic to poison Britannicus in 55 AD to secure the Roman throne. In 17th century France, white arsenic (As2O3) was known as poudre de succession (inheritance powder). Today, approximately 90 percent of all arsenic used in the US is used as a wood preservative. Arsenic is also used in electronics (gallium arsenide) and continues to be used in agricultural chemicals (pesticides, insecticides, herbicides, algaecides, fungicides and growth stimulants for plants and animals). Arsenic, being an element, is never destroyed once released into the environment. It will be with us forever.

Arsenic consumption is linked to a number of adverse health effects including skin, bladder and lung cancer. Oxygenated compounds of arsenic (arsenates: As+5 and arsenites: As+3) are soluble in water and, when ingested, mimic phosphates in the body. They can replace phosphates in the backbone of DNA resulting in conformational damage (mutations). Chronic arsenic poisoning (arsenicosis) may take years to develop. Not all naturally occurring arsenic poses a potential health threat. Some complexes are so insoluble that very little can find its way into the water supply from its natural state. Arsenic readily binds to iron oxide in the soil; however, that soil can undergo a reaction with organics at dump sites and landfills, whereby the arsenic is released into the groundwater as a soluble salt. Thirty percent of all Superfund sites contain arsenic released in this manner.4

There are extreme cases of arsenic poisoning elsewhere in the world. The small village of Heshan in China’s Hunan Province once teemed with prosperity brought about by numerous mining activities and chemical plants. The mines and many of the plants were shut down due to the pollution they caused but the damage was done. In 2010, 157 of the village’s 1,500 residents had died from cancer over a span of two decades and 190 others had developed cancer—all due to an overexposure to arsenic.5 Today, the very soil upon which the villagers walk is so polluted with arsenic that the dust that blows around continues to worsen their exposure.

Setting limits
MCLs are standards set by the US EPA for drinking water quality. The MCL is a legal and enforceable threshold limit on the amount of a substance that may be contained in a public water supply. Although generally regarded as safe, MCLs are not established to mean that. To set an MCL for a contaminant, US EPA first determines the safe level (that level of a contaminant that may be present with no known adverse health effects), which is called the MCL Goal (MCLG). The MCLG represents the real target levels but are established as non-enforceable limits rather than enforceable limits. The MCL enforceable levels are then set as close as possible to the MCLG. Politics and economics often play a major role in determining this spread. The resulting MCL often represents a compromise between safety and the costs of treatment. Therefore, the agency is able to choose a number that is less than 100-percent safe. There will still be those consumers who drink water well within the MCL limits who will eventually die from cancer or some other malady brought about by the long-term consumption of arsenic from their municipal supply.

Being in the upper end of the food chain has its advantages. However, avoiding exposure to arsenic is not one of them. It has been routine to add arsenic (Roxarsone) to chicken feed to prevent certain types of microbial growth and thus grow healthier (fatter) chickens. Since we are what we eat and so are chickens, the meat from the chickens contain arsenic, which in turn, is consumed by humans farther up the food chain. The US Food and Drug Administration (FDA) says that the level of arsenic found in chicken is safe to eat. US EPA tells us that arsenic at any level should be avoided. It would appear that this is another compromise where the government regulators are willing to sacrifice a few souls by allowing food stuff to be sold knowing that it may not be safe. And what happens to the chicken litter (read that as pelletized chicken poop)? This stuff is sold for fertilizer and is popular with rice farmers. This has resulted in elevated levels of arsenic in rice, which has forced the rice farmers to take a drop in the market price of their crop.6

Taking charge of your own destiny
Because the only safe level for arsenic in drinking water is ZERO, there have been numerous studies focused on the long-term effects of trace levels of arsenic consumption with ongoing regularity. A study by Columbia University1 reported that school children from three different districts in the state of Maine who were exposed to arsenic in drinking water showed lower IQ scores. The tests showed IQ performance losses of 5-6 points in those children (averaging 10 years old) exposed to > 5 ppb of arsenic. The average arsenic level was 9.88 ppb (still below the MCL). The performance loss reported was considered comparable to the studies on the effects of lead exposure. An MIT research study7 found that the children of mothers whose water supplies were contaminated with arsenic during pregnancy had gene expression changes that might likely lead to cancer and other diseases later in life. (This is the first such evidence of potential genetic alterations resulting from prenatal exposure to arsenic.)

Avoiding exposure
Incidental exposure to arsenic consumption through water sources is avoidable. Today’s technologies can very affordably reduce arsenic to non-detectible levels in drinking water in both POE and POU treatment. Reverse osmosis, distillation, iron oxide and activated alumina adsorbants, as well as ion exchange are very effective and well-proven treatments for arsenic reduction. Because arsenic may exist as different species that respond differently to various technologies, effective treatment may involve more than one type of filter. There is no need to compromise in protecting your good health and that of your family. Reducing arsenic to a safe level at every home is a monumental task. But it also presents a monumental opportunity for the water treatment professional. Take the time to learn your trade and do it right.

C.F. ‘Chubb’ Michaud is the CEO and Technical Director of Systematix Company, Buena Park, CA, which he founded in 1982. An active member of the Water Quality Association, Michaud has been a member of its Board and of the Board of Governors and past Chair of the Commercial/Industrial Section. He is a Certified Water Specialist Level VI. He serves on the Board of Directors of the Pacific WQA (since 2001) and Chairs its Technical Committee. A founding member of WC&P’s Technical Review Committee, Michaud has authored aor presented over 100 technical publications and papers. He can be reached at Systematix, Inc., 6902 Aragon Circle, Buena Park CA 90620; telephone (714) 522-5453 or via email at cmichaud@systematixUSA.com.