Is Ebola a Waterborne Virus?

At the time of this writing, the first Ebola patient in the US, Thomas Eric Duncan, has died in Dallas, TX and a healthcare worker who cared for him has developed a fever and since tested positive for the virus.1 This is the first known case of Ebola transmitted in the US. Although the healthcare worker reportedly wore full protective gear when caring for Duncan, she may have still acquired Ebola. While transmission through the environment is thought to be rare, the possibility does exist and brings into question how we can better prepare to stop the spread of this deadly disease.

Ebola history
Ebola virus is one of five recognized viruses within the Ebolavirus genus. Four are known to cause disease in humans, with Ebola virus being the most relevant agent leading to the disease known as Ebola virus disease (EVD) or Ebola hemorrhagic fever (EHF). Initial symptoms are mild and flu-like, including fever, sore throat and muscle aches that rapidly progress to vomiting, diarrhea and skin rashes. Symptoms often progress to include organ failure and internal, as well as external, bleeding. The onset of symptoms typically occurs between two days and three weeks following exposure. Patients are not considered contagious unless they have started experiencing symptoms of illness. Only about seven percent of Ebola cases show up more than 11 days after exposure. No symptoms after 21 days means one is free of the disease

Ebola was first identified in 1976 with EVD first reported from the Sudanese region of Africa, including the Democratic Republic of the Congo (formally Zaire). From 1976 to 2013, the disease remained largely contained to tropical regions of Africa with under 2,000 cases reported. Although Ebola is not a new virus, the population affected is new. Previous outbreaks occurred in remote African villages and burned out quickly as the high fatality rate and severe illness discouraged close contacts enabling virus spread. More recently, cases are found not just in rural areas but in a major urban region of west Africa. The 2014 Ebola virus outbreak is now a pandemic with cases documented in multiple countries and growing. In west Africa, more than 8,000 Ebola cases have been reported with about half resulting in death. The average case-fatality rate is 50 percent but has ranged from 25 to 90 percent in previous outbreaks.

Routes of transmission
Ebola is known to be transmitted via close contact with infected bodily fluids. The most infectious fluids are blood, feces and vomit. The virus has also been detected in breast milk, urine and semen, where it may persist for months.2 Tears and saliva may also carry the virus but there is no evidence of the organism being found in sweat. The virus can be transmitted indirectly via contaminated surfaces or potentially from exposure to droplets of bodily fluids to infectious orifices or broken skin of another individual.

The uncertainty of the transmission route and the severity of the disease have led to panic and actions of violence and avoidance in some situations. Although the route of transmission is defined as person-to-person, the potential for environmental transmission has caused concern in the general population. With each identified Ebola case in the US, the victims’ living quarters were thoroughly decontaminated with disinfectants and all close contacts were informed of the potential risks. Very close contacts were additionally quarantined and observed for possible infection.

Managing fears
Ebola is a scary, uncertain, incurable and fatal illness. Understandably, the risk of an Ebola epidemic incites fear in the population but there are other ailments, including other infectious agents, that cause many more deaths and also warrant attention. Business Insider recently published a representative graphic of expected deaths from various causes over the eightday period that Duncan was diagnosed and died (Figure 1).3 The graphic details expected deaths from various causes over the eight-day period that Duncan was diagnosed and died. Notably, the common influenza virus presents a significant risk as well. Each year, thousands to tens of thousands die in the US alone from common influenza. (If you have not received your yearly influenza vaccine, consider scheduling an appointment now). New strains evolve readily, making yearly vaccination necessary to maintain probable immunity. Fear of Ebola infections is compounded by the fact that we have little control over the disease. Vaccines are experimental, as are treatments, leaving the tools of screening, isolation and quarantine our best defenses for control. These controls are moderately effective for preventing the spread of Ebola to others but what role does the environment play? Could Ebola be transmitted from contaminated surfaces, water or food? 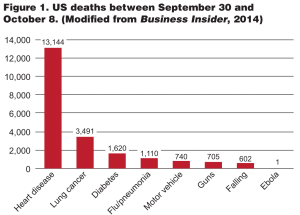 Much of the fear surrounding Ebola is over the possibility of the virus being air or waterborne and capable of widespread transmission from uncontrollable sources. Repeatedly, health experts state that the virus is not considered airborne, meaning it cannot circulate in small aerosol particles and spread via inhalation. The virus may, however, be propelled into the air via bodily fluids, putting close contacts at risk and settling on surfaces where it could survive for hours or more.

One study by researchers at the CDC, however, found that under perfectly controlled environmental conditions, Ebola could survive on surfaces and remain infectious for up to six days. Under non-ideal situations, however (typical of schools, airports, etc.), the virus has been found to survive on surfaces for only a few hours.4 Compared to influenza and common cold viruses, which survive hours to days, Ebola is much less likely to spread through the environment. Compared to norovirus (the cruiseship virus), which survives for up to a month on surfaces, Ebola is considered a very weak virus outside of its host.

Recently, the Water Research Foundation issued a press release explaining that the virus is not spread by food, water or air. According to the release, Ebola is a very fragile virus that survives only minimally in the environment and when separated from its host. Again, known transmission routes are via close contact with an infected and symptomatic individual where exposure to blood, vomit and feces occurs directly. Researchers believe that Ebola is adapted only to bodily fluids with higher salt concentrations. In the absence of biological salts (such as in natural water supplies), the virus is not properly buffered and in fact takes on water until it explodes and is destroyed. This likely occurs within minutes.

Control
Major US airports, including New York City’s JFK, have begun screening passengers from west Africa for signs of EVD. Current methods of disinfecting surfaces, washing/sanitizing hands, cooking food and treating water are expected to eliminate Ebola virus from the environment. As events from the first case of EVD transmitted within the US unfold, it is clear that we have more to learn about Ebola virus and how to prevent its spread.