Despite desalination being an option, there are over two billion people who do not have access to clean drinking water or adequate water for sanitation purposes. Critics of desalination argue that it is not an urgent concern and that the cost is too high. Others suggest that water is becoming the ‘new oil’ (Kennedy, 2014). This article invites the reader to explore the top ten myths about desalination, a viable option to provide fresh water to populations experiencing extreme drought and/or global warming.

Myth #1. Desalination is not an urgent concern
It is a myth to believe that desalination is not an urgent concern. As of May 13, 30 percent of six southwestern US states were recorded as experiencing extreme drought (Hess, Weigley and Sauter, 2014). In California, heavy groundwater pumping is causing the land to sink (subsidence), threatening further damage to local aqueducts and dams (Grossi, 2014). A survey released in July showed that one-percent more water was used in California during May than the month of May in the prior three years (Pickert, 2014). Power generated for six million people by Lake Powell on the Arizona/Utah boarder is being threatened due to plummeting water levels (Egan, 2014).

Lake Mead, the largest reservoir in North America, was at 39 percent of capacity in October. As the Colorado River and its tributaries are the only large river system in the far southwest, this is analogous to the northeast US losing 61 percent of its trees in around a dozen years. According to a 2014 NASA study, the amount of groundwater loss in the Colorado River Basin in the last decade is almost double the volume of a full Lake Mead. As a result, Lake Mead may become a ‘dead pool’ by 2036, despite $817 million invested in temporary efforts to construct a deep straw to suck water once the lake reaches extreme lows (Allen, 2014).

Myth #2. Desalination costs too much 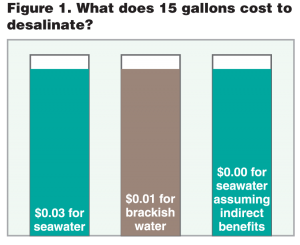 Desalination does not cost too much. As indicated in Figure 1, the costs are virtually free compared to the costs of 15 gallons (56.78 liters) of beer, orange juice or any other liquid people purchase. Table 1 presents benefits of desalting that are not calculated in construction costs. After considering other social, economic and environmental factors, it is sometimes more expensive not to desalinate. In addition to the cost of sinking land, a lack of power production and millions being spent on short-term solutions, farming losses have been recorded in the billions (Grossi, 2014). 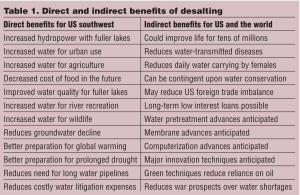 As with computers, the value of a commodity partly hinges on its future cost. Desalting costs have been declining for a half century and decreasing groundwater and increasing food costs will make seawater more attractive. Intense competition between corporations within and between nations is certain to reduce future desalting costs. On March 13, 2013, new filters were announced that are large enough for seawater to pass through but small enough to block the salt. John Stetson, an engineer at Lockheed Martin Corporation, who is working on the new membranes, indicated they would be 500-times thinner, 1,000-times stronger and use approximately 100-times less energy (Alexander, 2013). It is unknown when Lockheed Martin or dozens of other entities may finalize these types of game-changing innovations.

Myth #3. Desalination plants must be powered by fossil fuel
It is a myth to believe that desalination plants must rely on fossil fuels. The Perth, Australia plant is 100-percent powered by wind. It went into operation in 2006 and has been so successful that a second plant was constructed. China’s first of several windpowered desalination plants went online in 2014. Saudi Arabia is investing $11 billion to convert all of their oil-powered desalting plants to solar power by 2020 (Websdale, 2013). Scotland has considered a wave-powered plant that could potentially share space with another power source. Abu Dhabi has tiny solar-powered plants used to purify groundwater with double the salt content of oceans; this water is being used to re-introduce the Arabian Oryx to the region. In September 2013, a 30-year agreement in California requiring methane power producers to sell their generated renewable power to Pacific Gas and Electric expired, allowing them to sell this power to desalination plants (Abraham, 2013).

Myth #4. The US government is investing in desalination
The US does not have significant investments in desalination. In recent decades, the US government has made very meager investments in new desalination technology. Food and Water Watch recently estimated the federal government spent $10-$25 million per year on desalting research and development, while private industry is spending several times this amount. According to the White House Office of Science and Technology Policy, the 2015 budget includes $66 billion for non-defense R&D and $70 billion for defense R&D. Assuming the desalting R&D budget is $22 million, the total non-defense R&D budget is 3,000-times higher. The US is roughly a decade behind other nations in this potentially life-enhancing technology, running the risk of becoming dependent on these nations by importing desalting technology.

In millions of gallons per day (MGD), Table 2 compares seawater desalination capacity for nations with the most usage. This table was adapted from GlobalWaterIntel.com and the March 24 issue of Time Magazine. In the July 22, 1991 issue, Time had a cover photo of the Colorado River as the most endangered river. For over 10 years, the US southwest has shown clear signs of running out of water. Many of the nations in Table 2 are far less wealthy than the US, have far fewer people than the US southwest and/or have a land area far smaller than the US southwest.

The Sahara Forest Project was launched in November 2012 at a climate conference with a goal of using heat and seawater to grow crops. This project has been successful in Qatar, an Arabian desert peninsula in southwest Asia, because this region has an abundance of heat and seawater, allowing them to provide fresh water that is clean enough to grow crops such as cucumbers, barley and arugula. This is made possible with the help of solar and wind power. Participants in this project are researching the potential to build an algae cultivation plant to use for large-scale bio-energy production, with the largest shared cost being the saltwater infrastructure (Carrington, 2013). 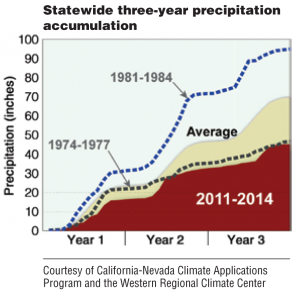 Myth #6. Coastal land is too expensive to build desalination plants
Coastal land is not too expensive to build desalination plants. There are many options to so-called costly coastal land. Desalting plants could be built on military or other coastal public land. In 1993, a vertically designed desalting plant was built in Pakistan. Spain, one of the co-authors and others have worked on more recent vertical plant designs. This design reduces land usage by roughly 75 percent. Another variation is to locate the plant a half mile or so away from the coast at an elevation below sea level so that the falling water (similar to dams) provides 100 percent of the plant’s electricity with excess electricity available for sale. In 1994, Japan built a major airport over seawater, which uses many times the land that would encompass an off-shore desalting plant. Dubai’s Palm Islands includes 60 luxury hotels and 4,000 villas, which encompass many times the acreage of Japan’s airport. Within 25 years, it seems likely that significantly less expensive desalted water will be delivered to locations dozens of miles inland from the coast.

Myth #7. All salt must go back into the sea
Salt does not have to go back into the sea, as it is possible to dilute and break down brine to use in other industrial processes. According to Saltworks (2014), there are over 14,000 different uses for salt to cook and clean with and to use in beauty products. A portion can be also disposed of via injection wells. Solar ponds can be developed for salt re-use. In the future, chemical separation advances of brine are likely to be very lucrative and significantly offset construction costs.

Plant is underground and quiet as a library

Desalination efforts are criticized for sucking marine life through the water pipes due to inefficient filters. Recent efforts to correct this include using improved filters and choosing specific sites with less marine life. One method which would require an offshore plant model would have multiple intake tubes buried under the ocean floor to suck water where little marine life exists (Desalalternatives.org, 2014). Multiple intake tubes would also lessen the force of the suction. A diffuser is an apparatus that dispenses brine at many locations, often near sea currents. The Perth plant received multiple green awards that recognize its diffuser.

Myth #9. Desalination does not relate to human health and well being
It is a myth to believe that desalination does not relate to human health and wellbeing. With world population over seven billion, fresh water is becoming an increasingly scarce resource. With innovative desalination techniques, some nations will have reduced prospects for the population control measures of waterborne diseases and war. Some benefits of access to clean water include, but are not limited to, higher IQs in children, increased heart, blood, skin and nerve health, as well as a decreased risk of cancer (Sanatoga Water Conditioning, 2014). Other benefits include reduced headaches, increased mental alertness, aids digestion, helps slow aging, flushes toxins, boosts metabolic rates and transports nutrients throughout the body (Landphier, 2013). As human blood is 90-percent water, clean water reduces the potential of malfunctioning in multiple human organs.

Conclusion
In conclusion, desalination is an effective technique to provide fresh drinking water to populations suffering from drought and/or global warming. It may also serve as a lever to promote improved international relations. The US could finance or build a state-of-the-art desalting plant in Mexico in exchange for the US obtaining an equal amount of Mexico’s water in Lake Mead. This new water can then be allocated to Colorado River cities that attain the greatest annual per-capita reduction in water usage. Over 50 percent of Israel’s drinking water now derives from seawater; the US and/or Israel could build a desalting plant for Gaza in exchange for attaining specific goals.

Table 3 presents data on seven states running out of water in terms of percent of total land area relative to conditions of severe drought, extreme drought and exceptional drought in 2014. California was identified as the state with the most serious water condition. Climatologists and water analysts are in substantial agreement that water shortage conditions are likely to persist in the near future. As California and the Midwest are the two primary food-producing areas in the US, such data signals a near certainty of increased food prices in the US. Such data also beckons the US to pursue conservation-based new desalination techniques. With global population certain to increase, desalination is a viable option.

About the authors
Genevieve Minter is a PhD student at the University of Nevada, Las Vegas. Her areas of study include ecopsychology and environmental sociology. Minter can be reached via email at [email protected].

Mark Bird is a faculty member at the College of Southern Nevada. He is a former federal water planner and author of over 30 water-related articles. Bird can be reached via email at [email protected].

For her quality comments on an early draft, the authors wish to thank Lynn Jeffress.