Isn’t ozone bad for you? If I breathe in ozone will I get sick? Isn’t it smog? Isn’t it the large hole in the sky? We are often faced with these viable questions in our industry and it is unfortunate that ozone’s accolades are often tarnished by the negative connotations with which it is sometime associated.

Ozone production in nature
Most of us equate the word ozone with the ozone layer, which is in the upper stratosphere protecting the Earth from the harmful UV radiation emitted from the sun—more accurately, UVB radiation, which is related to the cause of skin cancer. The production of ozone occurs in nature when oxygen (O2) rises to the upper atmosphere and is exposed to the sun’s UV rays. The UV rays split the oxygen molecule into two separate O1 atoms. The O1 atom being very unstable combines with an O2 molecule to form ozone (O3) (see Figure 1).

Bad ozone?
So-called bad ozone is formed when carbon dioxide given off by cars and power plants reacts with sunlight (UV) at ground levels. Those chemicals are a mixture of nitrogen oxides (NOx), VOCs, methane (CH4) and carbon monoxide (CO). The result is smog, the air pollution that we see and smell. Most smog reports contribute high levels of ozone to being smog, but it is a common fallacy. Ozone is not smog. Smog is caused mainly by automobile emissions and is the greatest source of airborne pollutants in many large cities today, whereas ozone is not a component of smog, but rather Mother Nature’s way of helping to eliminate smog.

As components of smog (NOx and VOCs) increase, so do the levels of ozone to combat our negative impact to the atmosphere (see Figure 2). When smog levels are usually discussed, ozone is targeted because it is relative to the smog conditions and is much easier to measure than the other components that form smog. This is the reason that ozone has long been used to indicate smog conditions and the reason why most people view ozone as bad. 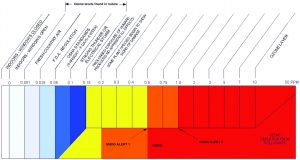 If smog does not dissipate at the ground level, it can reach the upper atmosphere, where it then reacts with ozone within the ozone layer. It is this smog that is causing the depletion of the ozone layer or the cause of the hole.

Ozone at ground level can be measured easily and is regulated by the government through entities such as the Occupational Safety and Health Administration (OSHA) and US EPA. This regulation is based on a time-weight average (TWA) and the type of work being performed (see Table 1).

Good ozone
Ozone provides a great benefit essential for daily life, so in a sense, all ozone is good. Like the ozone created in the upper atmosphere, ozone can also be man-made for a number of water and air treatment applications, including oxidation of contaminants in potable water, disinfection and oxidation of contaminants in pool and spa water, disinfection of zoo and aquarium water, wastewater treatment and the purification of indoor air within a heating, ventilation and air conditioning (HVAC) system, and many more.

Man-made ozone is created from either UV light or by corona discharge (CD). These ozone generators are designed to produce specific quantities of ozone based on their application. Ozone’s exploits have been known the world over, from large metropolitan drinking water systems for cities, such as Los Angeles, Orlando, Seattle and Dallas, to name a few. Ozone has also been mandated by the Olympic Committee to be used in all Olympic competition and training pools. Ozone was approved by the US Food and Drug Administration (FDA) as an antimicrobial agent in 2001 and has since been used in fish, meat and poultry plants, for the disinfection of the meats, cutting boards, knives and all other food surfaces, as well as air treatment within those facilities for odor and bacteria control. A somewhat new market for ozone is within commercial and residential laundries where ozone can help to oxidize soil and kill bacteria, while reducing water, chemical and energy consumption.

When ozone gas is produced for water and/or air purification, it is done so within specific design requirements and parameters. Manufacturers of ozone systems incorporate vacuum and/or pressure switch interlocks, thermal overload fail-safe devices and other electrical interlocks that can be used to remotely shut down ozone production. These interlocks can be connected to ambient-air ozone gas detectors that will shut down ozone production if ambient air conditions exceed established permissible exposure limits.

Effects of ozone
Is ozone bad for you? During more than 100 years of varied commercial applications, the safety record of ozone is unsurpassed. During this notable period, there has never been a reported fatality linked to the exposure of ozone anywhere in the world as a result of its generation and application. The known effects of ozone are most often recorded as ozone gas acting as an irritant affecting the upper respiratory system, causing shortness of breath, coughing and drying out the eyes. Some people who are exposed to gaseous ozone experience headaches, which usually fade away rapidly after moving into fresh air. Fresh air or oxygen (in extreme cases) is the primary first-aid measure taken in cases of ozone exposure.

This incredible safety record of ozone is attributed largely to the fact that those who manufacture ozone generators and ozonation equipment recognized early on that the strong oxidizing and disinfection properties of this unique gas must be controlled. Operators of ozone and ozonation equipment must not be exposed to ozone that might leak or escape from the closed environments of its production and application. Responsible ozone manufacturers incorporate all the safeguards necessary to provide a safe work place.

Conclusion
It is unfortunate that such a powerful tool and life-sustaining resource to the planet can at times be confused as the cause of the hole in our atmosphere, rather than the victim of the assault. The myth that ozone is bad is due to the misconception or misunderstanding that many have regarding ozone, the most natural cleaning agent that the world has seen to date. With the correct design and installation of an ozone system, it can be used safely and very effectively in many applications the world over with success and no harm to people. With ozone’s somewhat pungent smell, it can be sensed at as little as 0.02 ppm, which is far below the OSHA and US EPA standards. This allows those working with or near ozone the ability to leave the premises in ample time, if ozone were present in a work place. In addition, ozone systems can be automatically interrupted with fail-safe sensors to provide further safety precautions.

Slowly the negative connotations of ozone are fading. More and more industries are turning to ozone for its benefits, whether for water purification, food and laundry disinfection or to help clean the air around us. By dispelling the myths and providing truth regarding ozone, perhaps it can finally be perceived as the great disinfectant, sanitizer and oxidizer that it is!

About the author
Marc De Brum is the Assistant Sales Manager/Application Engineer for ClearWater Tech, LLC of San Luis Obispo, CA. For more information related to ozone for potable water, commercial and residential laundry, and pool and spa treatment, he can be contacted at (800) 262-0203 or by email at mdebrum@cwtozone.com