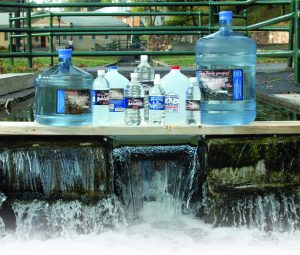 Each year, the International Berkeley Springs International Water Tasting Competition takes place in this small hamlet nestled in West Virginia’s northeastern panhandle region. This renowned event hosts the best waters from around the world in what is claimed to be the country’s first spa, where the pure, clean spring water bubbles from the ground at a constant 74.3°F (23.5°C).

For over 250 years, the mountain water has brought visitors face to face with the region’s beauty and the springs attracted native Americans long before the Europeans arrived on the Atlantic shores. In 1747, the springs were first shown on a map drawn by Thomas Jefferson’s father. Somewhat later in 1776, Berkeley Springs was established as The Town of Bath and provided America’s first public spa. The area has been visited by such notable figures as George and Martha Washington, Franklin Roosevelt, Lord Fairfax, Stonewall Jackson, Lafayette and James Rumsey. By the close of the 18th century, Bath was considered America’s premier spa.

It’s in this idyllic setting that Rodney and Butch DeHaven operate family-owned Berkeley Club Beverages, taking full advantage of the pristine water sources and all it brings to its valued clientele. For the second generation, the company relies on a fascinating history, coupled with international fame, to attract customers and keep them coming back for more. Several family members are actively involved in the operation, including mother Patty, brother Terry and sister Tammy Benson as well as her son, Jeb. 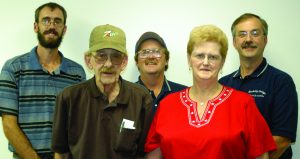 The brothers got their start with a small soda distribution company until it was purchased by a much larger business. They continued distributing bottled water for Berkeley Club Beverages of Winchester, whose owners were ready to retire. It was a natural fit for the DeHaven family and they purchased the bottler outright. It was a small operation that grew when current Sales Manager (and company spokesman) Michael Morris told them their enterprise needed more production capacity to continue expanding the business successfully. Morris knew the West Virginia Spring Water facility was available and convinced the brothers to pursue that option, which they did, increasing their bottling capacity significantly and positioning the company for future growth with a great reputation.

Morris knows his business well, having spent the entirety of his adult life associated with the bottled water industry. “This started as a part-time job after school during my sophomore year in high school so I could buy my first car,” he said. “I remained in the business because of the growth potential of bottled water and have worked for several companies. After graduation, I was hired full-time in production. Having been in the business for 37 years, I’ve been fortunate to work in every aspect, including as a route driver, route manager, sales manager, tractor trailer driver, quality control manager and certified by West Virginia as a plant operator. The single most rewarding thing is providing our customers with high-quality products. As we continue to grow, we maintain our commitment to that quality and service.” 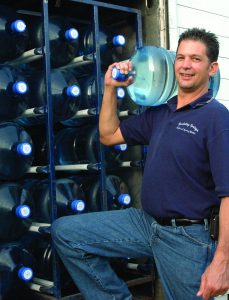 Morris noted: “We’ve won several awards at the International taste-testing competition. Our spring water has won the Bronze Medal in 2009, 2010, 2012, 2013 and 2014 and our purified water won the Gold Medal in 2014. As host bottler, the honors that are bestowed are not taken lightly and we continue to strive to greater heights each year. In addition, we are the bottler of choice for private labeling for many large companies and brand-name water treatment businesses in the area.”

Berkeley Club Beverages has a long reach, serving five mid-Atlantic states: West Virginia, Maryland, Delaware, Virginia, Pennsylvania and the District of Columbia. Clients are found as far east as Baltimore and Maryland’s Eastern Shore. To manage this large territory, the company has 27 employees and nine service vehicles to meet customer demand. They offer five- and three-gallon returnable bottles and hope to move into bulk water sales as well. Employees are a valued part of the team and are offered in-house training in good manufacturing practices, standard operating procedures and hazard analysis and critical control points (HACCP). As a result of the rigorous practices of Berkeley Club Beverages, the company is HACCP- and IBWA-certified.

Without a doubt, bottled water serves an important function for many. In areas lacking critical or stable infrastructure, consumers readily turn to what they know is a safe source. To meet the extensive demand, companies build their businesses into thriving enterprises by knowing what consumers need and making that a core aspect of operations. In some ways, the diminishing supply of potable water, in addition to fears of contamination from crumbling infrastructure, is advancing the goals of bottled water providers around the world. It’s one aspect of water treatment and transport that is notable in its growth potential and requires a certain amount of forward thinking to stay at the front of the pack. Part of the idea-spectrum for Berkeley Club Beverages to meet that goal is to be innovative and think creatively. As a result, the company hopes to create and market a four-gallon, one-way bottle which will fit all water coolers. These containers will also be beneficial in disaster and emergency situations.

“As we continue our efforts to be the best bottler around, we realize that success and expansion has its own growing pains, including cash flow, new equipment, transportation, etc.,” said Morris. “And, the highly regulated nature of water production can add significant costs to bottlers and providers everywhere. I’d like to see less regulation, for example, from state to state, so we can meet the demands of the region without having to add costs associated with that regulation.”

Bottled water production is an integral part of our consumer, needs-based society, helping to offset serious concerns about the quality and safety of our nation’s limited supply. Meeting those needs and addressing consumer concerns is an important part of Berkeley Club Beverages’ mission and dedication to their customers. They are positioned to meet additional demand and rise to the challenges posed by everyday events that impact people’s ability to acquire a reliable source of potable water. The company has a bright future overall.