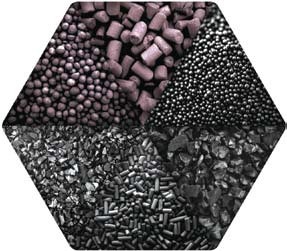 There is an old Chinese saying that goes, “May you live in interesting times.” Well, these are certainly interesting times in the world-wide activated carbon (AC) industry and market. The market has experienced a couple of major supplier changes and mergers and acquisitions in the past year. Long awaited US EPA regulations have come to fruition and will require the use of much more activated carbon, which could result in some carbon shortages and price hikes in the next year. This article, the fourth in an annual series discussing the activated carbon market, highlights the forces and issues that have an impact on AC supply, demand and pricing. I hope to provide readers with a better understanding of the scope of this market and the headwinds that buffet raw material pricing, manufacturing cost, shipping costs and thus, activated carbon prices to the end user.

Changes in ownership of activated carbon manufacturing companies or major suppliers in the past year include the sale of Siemens Water Technology LLC to AEA Investors LP, Jacobi Carbon (Sweden) to Osaka Gas Chemical (Japan), and the bankruptcy and subsequent plant auction of the Big Island Carbon plant in Hawaii. (The recent auction results have not been released so it is not yet known if the plant found a buyer or if it will be sold off piecemeal. The Big Island Carbon plant was built to manufacture activated carbon from macadamia nut shells.) The plans announced a few years ago by Carbonxt (Australia) to build a new coal carbon manufacturing plant in West Virginia apparently have been put on hold indefinitely, but there is still activity in Asia (mostly in India, Indonesia and the Philippines) to build new coconut-shell charcoal plants and new coconut-shell activated carbon plants. A couple of new ventures have started in North America to manufacture AC from waste-wood raw material and I assume they plan to help supply the coming coal-fired power plant mercury removal market that has been on watch for the past decade. I mention the sale of Siemens Water Technologies because they operate three AC reactivation facilities in the US (California, Arizona and Pennsylvania) and own Westates carbon. The new name of the Siemens group is Evoqua Water Technologies, LLC. The Jacobi Carbon sale helps Osaka Gas, parent company of Osaka Gas Chemical, to greatly enlarge its footprint in the activated carbon market. Osaka already owns Japan EnviroChemicals, Ltd., maker of the Shirasagi brand of activated carbon in Asia. The Jacobi Carbon purchase probably makes Osaka Gas the largest producer of coconut-shell activated carbon in the world.

By far, the largest impact to the activated carbon market in the next year will be the implementation of the US EPA MATS Federal Standards (mercury and air toxic standards) regarding mercury emissions control at coal-fired electric power plants. This has been talked about for well over a decade and it will finally become law effective April 2015. Some power plants can and will receive a one-year extension but probably 70-75 percent will comply starting in 2015. Currently, several states have mercury standards in place and dozens of power plants are already purchasing powdered activated carbon (PAC) as the most effective and economical method to comply with the new standards. Some power plants have switched to natural gas if feasible and some have been closed, citing the cost of equipment to meet new environmental regulations (not just mercury, but scrubbers needed for SOx and NOx). Five to 10 years ago, this new mercury-removal market was estimated to require 800 million to one billion pounds per year of PAC. Naturally, this got the attention of AC manufacturers and existing plants have been de-bottlenecked to squeeze out more production capacity, while designs for adding new production lines have been prepared. One new grassroots plant, ADA-CS, was built in Louisiana a few years ago to mainly produce PAC for this new market. In the past few years, with the closing of some power plants and some plants switching to natural gas, and AC producers developing more effective activated carbon grades that will require less PAC, the new estimate for this market is in the range of 450-650 million pounds per year. There is a lot of current activity with utility companies doing contracts for supply of activated carbon injection (ACI) systems and supply of PAC. Not only coal-fired power plants are affected as cement kilns and incinerators also have to meet the new mercury standards. The other US EPA carbon market driver is the final implementation of the DBP rules. These rules are to help prevent the formation of compounds such as THMs and HAA5s, known health hazards, by removing organics from water before chlorine is added as disinfectant at municipal drinking water plants. This market has estimated requiring 50-70 million pounds of granular activated carbon (GAC) per year.

Domestic activated carbon manufacturers have been somewhat protected from Chinese imports since 2007 and the current tariff is in place until 2017. Chinese carbon products are still imported but prices are more true to market since the tariff started years ago. China has its own growing need for activated carbon and it also exports large quantities to Europe and Japan. The Chinese anti-dumping tariff on certain steam activated carbon is still in place and in its second five-year iteration. This has kept the prices of Chinese imported AC on a more even keel. Each year, the previous period of review is analyzed and adjustments made to the amount of tariff paid to import into the US. This mainly applies to coal-based AC from China. The dollar amount of activated carbon imported into the US in 2013 is a bit down from the previous year but that could be a reflection of a pricing dip in 2013 after a price rise in 2012 (see Figure 1). The Generalized System of Preferences (GSP) was allowed by Congress to lapse without renewal last July and it is still in limbo. This means that there is currently a 4.8 percent duty on coconut-shell carbon from Asian countries. Some sellers add the duty, some add duty and say they will later reimburse customers when the government renews GSP and reimburses them, and some pay it but do not pass on to customers. Domestic coal-based activated carbon experienced price increases in 2013 of five to 10 percent per ton. 2014 has seen some price escalation in coconut-shell activated carbons due to the usual factors, such as energy costs and coconut-shell charcoal costs. The coconut char situation should stabilize later this year. 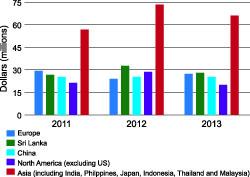 Conclusion
Whether you purchase domestic activated carbon or imported carbon, you should  be sure to receive the carbon product MSDS specification sheet to compare to the certificate of analysis (COA) and NSF certification and Prop 65 compliance information, if required for the application. Review packaging requirements as you may be buying carbon in one type of package that was set up years ago and current needs or systems may be better served by packaging alternatives. Standard packaging includes 1-CF and 2-CF bags, and bulk sacks of 1,000 or 100 pounds, depending upon the carbon type. If one is using a washed activated carbon (water or acid washed) for applications requiring low dust, look at the equivalent regular, un-washed, carbon grade because de-dusting equipment at carbon plants has improved over the years and the washing and drying steps can add 10-20 percent to the price. Washing does have the benefit of lowering the soluble ash and that is critical in some applications. As I always say, please take advantage of your activated carbon supplier’s knowledge base. Tell your supplier about your application and what results you require to meet your needs. Your supplier needs to understand your operation and can then recommend the best activated carbon for the job at the most economical price.

About the author
Kenneth Schaeffer, President of Carbon Resources, LLC, has over 30 years experience in the activated carbon industry. He holds a BA in biol- ogy and an MS in environmental science from the University of Texas at Dallas. Schaeffer is past Vice-Chairman of the ASTM Committee on Activated Carbon D28 and past Vice-Chairman of the International Activated Carbon Manufacturers Association (IACMA). He can be reached at ken@carbonresources.com or (760) 630-5724.