Industrial Section: “We have an awareness problem…” 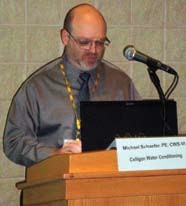 Dave Haatja, WQA Executive Director, began his remarks to the Opening General Session with the observation: “Growing awareness is the most crucial task for this association.” He was referring to the challenge the association faces in getting the word out to consumers about their need for POU/POU water treatment. This was preceded by comments from Industrial Section Chairman Michael Schaefer, CWSVI, PE, as he opened the Industrial Section program with these words: “We have an awareness problem.” Said the Section Chairman: “Considering its limited resources, WQA continues to have an awareness problem with the high-end consulting engineers and industrial end users, in communicating all that the association has to offer, with the goal of attracting more of them to WQA Aquatech.”

Schaefer, in a post-show phone interview, observed the WQA Industrial Section has two primary missions or desires. “One is to service WQA membership in areas of training and networking. These are member companies who have light and medium industrial market involvement. Our second desire is to attract industrial engineers and end users to attend the annual WQA Aquatech Show. This points to the need to put together seminars and programs that will appeal to end users and consulting engineers who are not members. So where do you put most of your energy? Focusing on the current membership or reaching out to desirable industrial attendees?” 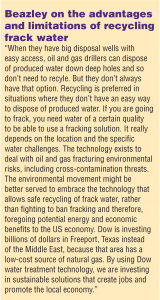 Schaefer said he sees the water treatment industry as divided into four distinct segments: 1) household, 2) commercial, 3) medium industrial and 4) heavy industrial. “Most WQA members don’t play in the heavy industrial sector and they probably never will. The opportunity for these members lies in servicing the medium industrial segment, which might include high-pressure boiler feedwater, medical laboratory and industrial metal rinsing applications.” He also made the point that WQA people are geographically limited to their immediate territory. Industrial professionals travel to multiple markets and represent a larger effective footprint. “While we don’t yet have industrial attendance figures on this year’s show,” said Schaefer, “I thought the Industrial Section meeting was as well-attended as any I have seen. I was also encouraged by attendance at the industrial educational sessions in Orlando, though we haven’t yet analyzed the makeup of these audiences. From walking the show, I thought the number of exhibitors displaying industrial equipment was about the same as last year. And, I noticed some additional booths that were dedicated to instrumentation at a level higher than what I had seen in the past. All in all, I sensed substantially higher interest this year in the industrial market. WQA has a ways to go, however, in creating awareness and serving our existing membership, while providing enough high-level education to challenge new folks coming in.”

It was reported in the section meeting that the series of WQA industrial webinars drawing to a close this June had as few as three attendees, suggesting a need to refocus beyond targeted member service people. “I was disappointed at the poor attendance,” said Schaefer. “Some feel that the 2:00 p.m. Eastern start time was problematic for the many service people who would be in the field at that time. Going forward, I think by welcoming sales people to the webinars, WQA could strengthen both attendance and effectiveness.” In summary, Schaefer observed: “The WQA Industrial Section faces a crossroads choice: to serve the educational needs of its current membership or to attract attendees with higher-level industrial water expertise. Personally, I believe that the focus must be on the current membership’s needs. At the same time,” he added, “WQA will continue to work with the American Society of Plumbing Engineers (ASPE) to reach high-end industrial providers and endusers.” 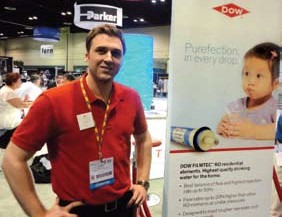 The reuse of produced and flowback water is of high significance to oil and gas operators, particularly due to local water shortages and historically dry conditions in the region. Water reuse allows operators to minimize the use and cost of freshwater resources, while reducing complexities surrounding local wastewater disposal and on-site wastewater trucking. “Omni is using a combination of two technologies, Dow ultrafiltration and Filmtec membranes,” said Beazley in a private meeting. “Soon they will be piloting our TEQUATIC PLUS unit to improve efficiency of their system. You’ve got oily solids that the TEQUATIC unit will separate out and let the oils pass through. It doesn’t foul in the presence of oil, which is why in the produced water space, TEQUATIC is becoming a preferred technology where you face very high suspended solids. It’s a lot less labor intensive than the bag filter alternative. In addition to Omni Water, we’re also working with another company using a different combination of products. Encotech, a leading provider of environmental solutions, uses three TEQUATIC units up front.” 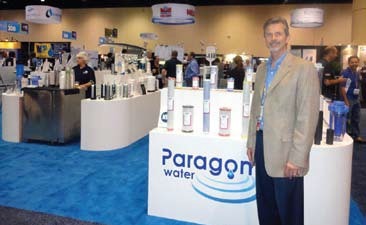 Dow’s Clean Filtration Techologies’ TEQUATIC manufacturing facility opened in Menlo Park, CA last March and has 20 employees, said Beazley. “Ultrafiltration is being used more and more for pretreatment in industrial water applications. Last year, Dow launched its IntegraPack, a modular UF skid that we can sell to the system integrator. While we’re not selling systems, we are putting eight or 12 units into a rack that can be easily integrated into industrial RO or as stand-alone applications for municipal water treatment. This June, Dow will launch a version of IntegraPac called IntegraFlo, a modular UF unit that will optimize the module design to double the output in the same footprint.” Dow is also looking for ways to apply UF to recycle water on a small scale for commercial applications, she said.

Dow showed its line of Filmtec BW60 residential/commercial RO membranes, introduced last year. “The BW60 delivers the highest available efficiency for 75 gpd membranes,” explained Peter Ingara, Global Marketing Manager for Residential, Commercial and Flat Sheet Membranes. “It performs with outstanding rejection in hard-water conditions for longer lifetimes and purer water. A combination of its design and membrane chemistry set it apart. We are able to take the knowledge gained from our large industrial membranes and apply it to this new class of residential membranes.”

Maisner’s change of focus
Robert Maisner, VP Sales and Marketing, Paragon Water, spent eight years at Premier Water, which was sold to Watts 12 years ago. “I chose to join Paragon Water recently because it’s a vertically integrated, innovative company with some great products. Paragon does not market its own brand, but manufactures products for companies focused in the dealer and retail spaces. Our scope is worldwide.” In addition to making a wide variety of consumer POU products for major brands including Culligan and Aquasana, Paragon has an integrated R&D unit with custom-design capabilities and makes carbon block filters under its American Carbon Block name. The company moved into a new manufacturing facility in Tampa, FL in 2013. Paragon has two plants in China where they manufacture water coolers, string-wound filters, residential RO systems and faucets, among other products.

Conclusion
WQA members and visitors to the Orlando meeting were treated to an impressive array of products representing commercial, industrial as well as residential market segments. All segments were well-represented in the educational sessions, which strongly competed for attendees’ time with show-floor activity.

One key issue became obvious. How will WQA distribute its limited resources to educate and motivate those representing the commercial versus industrial sectors? Some believe the perception of WQA is too ‘drinking-water oriented’. And as noted by the Industrial Section Chief, the WQA webinars are not as well received as anticipated. Are expectations for class size unrealistic? Does WQA need to change its focus? Should those involved in the industrial sector promote the products they sell or take a more consultative approach that is willing to unselfishly educate engineers and end users?

David H. Martin is President of Lenzi Martin Marketing, Oak Park, IL, a firm specializing in water improvement and environmental marketing that integrates old and new media. He can be reached at (708) 848-8404 or by email at dmartin@lenzimartin.

Beazley on the advantages and limitations of recycling frack water
“When they have big disposal wells with easy access, oil and gas drillers can dispose of produced water down deep holes and so don’t need to recyle. But they don’t always have that option. Recycling is preferred in situations where they don’t have an easy way to dispose of produced water. If you are going to frack, you need water of a certain quality to be able to use a fracking solution. It really depends on the location and the specific water challenges. The technology exists to deal with oil and gas fracturing environmental risks, including cross-contamination threats. The environmental movement might be better served to embrace the technology that allows safe recycling of frack water, rather than fighting to ban fracking and therefore, foregoing potential energy and economic benefits to the US economy. Dow is investing billions of dollars in Freeport, Texas instead of the Middle East, because that area has a low-cost source of natural gas. By using Dow water treatment technology, we are investing in sustainable solutions that create jobs and promote the local economy.”