While POU devices may not have prevented exposure to MCHM contaminant in West Virginia, they are well-suited to handle a variety of waterborne hazards and recommended for life’s certain but  unanticipated events.

Residents of West Virginia recently experienced a large and unexpected municipal water contamination event affecting nearly 300,000 customers in nine counties. On March 3, the Centers for Disease Control and Prevention (CDC) and West Virginia Department of Health and Human Services indicated that the water was again safe for consumption by all—including the most vulnerable populations. The unknowns surrounding the risk of this chemical spill, however, and others likely to occur in the future, have left people uncertain about the safety of municipal water supplies.

Details of the spill
The primary chemical spilled in the West Virginia case was 4-Methylcyclohexanemethanol (MCHM), a foam with a faint licorice smell and used to wash coal. On the morning of January 9, 7,500 gallons of MCHM mixed with two other industrial chemicals—propylene glycol phenyl ether (PPH) and dipropylene glycol phenyl ether (DiPPH)—leaked from a one-inch hole at the bottom of a stainless steel storage tank. By noon, following a plethora of consumer complaints, the West Virginia Department of Environmental Protection officials had traced the smell to the source. Aware of the spill by midday, local water utilities thought the treatment plant’s carbon filters could contain the chemical. They were wrong. Within four hours, the contaminant had exceeded the capacity of the carbon filters and began flowing into customer homes. At 5:45 p.m., city officials issued a Do Not Use order to warn consumers that their drinking water was compromised. Unsure of the risks, this action would buy city officials time to access toxicology studies on the chemical and determine the most appropriate response and mitigation strategy. 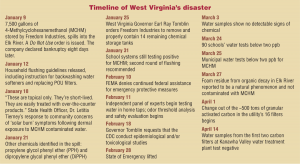 By January 10, approximately 700 residents had contacted the poison control center complaining of rashes and nausea. More than 169 were treated at local hospitals and 14 were hospitalized. Symptoms of MCHM exposure included vomiting, diarrhea, dizziness, headaches, eye irritation and difficulty breathing after prolonged exposures at high levels. With a clear waterborne outbreak underway, the CDC was called to assist and investigate the exposure and health risks associated with this spill. A federal expert work group was established from various stakeholders to review studies on the safety of MCHM. What they discovered, however, was a list of more unknowns.

MCHM health effects
MCHM is not typically found in drinking water. It is a specialized organic alcohol used in processing coal, but only certain types of coal products. Studies conducted pre-1990 by the Eastman Kodak Company documented MCHM to be a moderate eye irritant. Exposures of concern were primarily with workers who came into contact with high-concentration solutions through inhalation or the skin. Most studies to date have been conducted in animals, including rabbits who experienced eye irritation and rats who experienced symptoms of central nervous system disorders, reduced activity and lack of coordination (i.e., stumbling) after being fed high levels (> 500 mg/kg/day). Rats exposed to a single skin exposure of 2,000 mg/kg typically died. Mortal effects to the gastric system, the bladder and spleen were observed. Chronic exposures over a period of four weeks showed that levels below 100 mg/kg/day produced no observable adverse health effects, while chronic exposures approaching 400 mg/kg/day were associated with blood, kidney and liver effects that were thought to be temporary and reversible. No fatalities were reported in the West Virginia outbreak and hospitalization cases were generally mild.

The problem is that MCHM is a specialized chemical with limited industrial applications. Little is known about the safety of MCHM. After the spill, the chemical’s manufacturer, Eastman Chemical, provided limited toxicity data from their internal studies. No research exists, however, on the risks of low levels of the chemical on pregnant women or their babies.

Uncertain effects
Given that most of the toxicity studies on MCHM were conducted with animals, scientists needed to quickly determine the relationship of the animal-to-human response. While such extrapolations of human health risks from animal data are common, they are still wrought with uncertainty, including uncertainty regarding the adjustment factor between animals and humans and also the effect on sensitive populations (i.e., young, immunocompromised and elderly populations).

A relatively conservative approach was taken when setting the drinking water advisory level (or acceptable contaminant limit) of one ppm for the MCHM spill in Elk River, WV. Exposure limits were considered for children rather than adults and the acceptable limit further reduced by considering tenfold adjustments each for sensitive populations, animal to human extrapolation, and lack of toxicological assessments. A similar approach was used to calculate allowable levels of propylene glycol phenyl ether (PPH) in drinking water. Like MCHM, there is limited data or toxicological assessments relative to PPH. PPH does appear to be less toxic than MCHM, however, requiring a dose of > 2,000 mg/kg to kill 50 percent of the experimental rat population, compared to only 825 mg/kg of MCHM. In addition, PPH and DiPPH were a relatively small portion of the spill (7.3 percent of the total waste amount). Based on currently known information and calculation adjustments specifically for pregnant women, the advisory level for PPH was set at 1.2 ppm.

Unfortunately, while little is known about the risks of MCHM and PPH, even less is known about DiPPH, with no animal studies and no reported evidence of the adverse effect level. To determine the action level for DiPPH in drinking water, scientists simply considered it similar enough to PPH in chemical structure and applied the acceptable limits.

All clear?
Water samples collected in early March tested negative for MCHM. Samples were collected from four different locations along the Elk River and analyzed using highly advanced and sensitive methods, verifying that levels were in fact below the two-ppb mark. Previous studies suggested that levels up to one ppm are not likely associated with adverse health outcomes. Thus, the President of the West Virginia American Water utility in Kanawha Valley informed consumers that MCHM had been cleared from the drinking water distribution system. Consumers were instructed to begin consuming the water again, but given inconsistencies in flushing compliance and POU filter maintenance, exposures were likely still occurring.

A precautionary approach
Contaminant storage tanks are a reality in the US and worldwide. The second reality is that every container will eventually leak, requiring effective secondary containment measures. Secondary containment measures were not adequate in the Elk River facility. Research will continue on the population and surrounding environment for many months, or perhaps years. This outbreak identified deficiencies in the response, containment and treatment protocols in drinking water municipalities. While POU devices may not have prevented exposure to the MCHM contaminant in West Virginia, they are well-suited to handle a variety of waterborne hazards and recommended for life’s certain but unanticipated events.