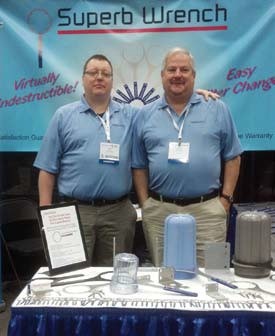 Superb Wrench, LLC, a family-owned enterprise, is fairly new to the water treatment market, but it’s making its presence felt in a positive way. The company is an outgrowth of Superb Fabricating, owned and operated by Herb Stricker, the inventor of its namesake product. Superb Wrench now ships products across the US and globally, to Australia, Japan, Canada and many others. It offers the metal filter housing wrenches to fit every housing on the market; if they don’t have one for an existing housing, they make it the same day. The company also manufactures heavy-duty brackets for filter housings as well as custom manufacturing of metal products for any industry.

The business began its existence in a quiet way, based on a hunch by Stricker. While attempting to change a water filter in his basement, he broke the provided plastic wrench—twice. Being very mechanically inclined and quite annoyed by the breakage of the wrench, Stricker drew out a pattern for the housing, took it to the CAD department at his metal fabrication shop, transferred the pattern to the laser and cut out a wrench. He took it home, tried it on his water filter housing and took it right off. Stricker then took the wrench to the dealer from whom he purchased the water treatment system and showed him the newly designed tool. The dealer said, “Give me 20 wrenches!” and Superb Wrench was formed. 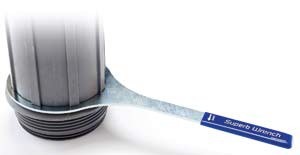 It was during this time in 2010 that Phil Hall started working at night for Superb Fabricating, in the parts department of the manufacturing division. He owned a landscape company but needed a winter job. Stricker took notice of how hard Hall worked and how dedicated he was to the job. He asked Hall if he would take on his new invention, the 7-gauge, zinc-plated, steel Superb Wrench for water filter housings. Hall had no idea of the intended use of the wrench but quickly learned of its need in the water industry. “The plastic wrench has a short lifespan due to its construction. It only lasts so long before turning brittle or just breaking because it’s not built strong enough to break the housing loose,” Hall said. “Our mission is to have our wrench packaged with filter housings by the manufacturers, instead of the plastic wrench they offer now. This will give customers the highest quality product while decreasing the likelihood of future problems, such as those Herb encountered.”

Superb Wrench faced a few challenges in finding out which housings would benefit from new wrenches. Company representatives attended WQA Aquatech and met with dealers who told them what they needed. The result of those meetings was a line of more than 30 different style wrenches and 15 different brackets. Another issue was lack of knowledge on the part of some users. The company would receive a call from the other side of the country, or even from a different country, but the caller had no idea which housing they had or the size. “One of our Internet retailers, www.water-softeners-filters.com, had us design a print-and-match feature for our informational website and their retail site,” Hall said. “Now they can print it anywhere in the world, the actual size, and match it to their broken wrench or even the housing itself. What a great feature!”

A major company goal, which Hall has already begun implementing, is to make wrenches available to homeowners through home-improvement stores, hardware stores and plumbing outlets. Additionally, the wrench and brackets are being packaged with the company’s first system. “USA Filtration Systems (www.usafiltrationsystems.com) now packages our products with their systems,” says Hall. “That company started with two systems: a drinking system kit and a whole-house filter. And, we are making new wrenches for golf course companies for their water irrigation systems, as well as many other applications. Our long-term goal is to be producing wrenches and brackets for the filter-housing manufacturers around the world. This allows us to give customers what they want or need from the beginning, a product that is right for the job, is well manufactured and carries a life-time warranty.”

“The need for water filtration will always be there,” Hall continued. “There are millions upon millions of people around the world today who drink unfiltered water. I think that as new ideas emerge and new styles of filters are invented, there are millions of housings that will be found in homes and businesses that will need a Superb Wrench one day!”