Last March, the Water Matters column presented information about a new standard under development by the NSF Joint Committee on Drinking Water Treatment Units. This standard, being developed by the NSF DWTU Task Group on endocrine disrupting chemicals (EDCs) and pharmaceutical and personal care products (PPCPs), addresses contaminant reduction claims for these types of compounds. As almost a year has gone by now since that article was published, and as there have been some interesting new developments, an update seemed timely.

A brief recap
Work on this standard began in 2008, after media reports that these types of compounds were being detected in finished drinking water, as well as source water. Development has been a major effort and along the way this work has led into previously uncharted territory. Due to the unique nature of this standard, there were several obvious questions that had to be addressed by the task group. The answers to these questions led this group to new places. In a nutshell, the task group worked through the following issues: 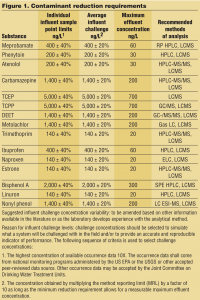 Changes based on initial ballot results
NSF 401 Drinking water treatment units – Emerging Compounds/Incidental Contaminants was initially balloted through the joint committee early in January, 2013. The results were successful, although some suggestions for improvement were made during this process. There were a number of excellent suggestions for improvement made by joint committee members based on the balloting. Discussion was held regarding these suggestions at the May, 2013 joint committee meeting. Based on this discussion, many of the suggestions were incorporated by the task group into a revised draft standard. The most important of these revisions included:

The revised version of NSF 401 was balloted through the joint committee in November, 2013. The ballot was once again successful, contingent upon successful validation testing. Validation testing includes testing actual products according to the criteria and methods in the standard to assure that there are no glitches or gaps in the standard and to assure that the test methods are workable and reproducible.

The next steps are to conduct validation testing. This will occur throughout the first quarter of 2014, continuing into the second quarter. There will be validation tests of both active media filtration systems and also POU RO systems. If necessary, additional revisions to the draft standard will be made based on any issues uncovered in the validation testing. Once any additional revisions to the draft standard have been incorporated, it will be ready for final approval by the joint committee and also by NSF’s public health oversight body, the Council of Public Health Consultants. And finally, because this standard is being developed through an ANSI-accredited consensus process, it will be an American National Standard, ultimately as NSF/ANSI 401.

More information
I will be presenting an educational session on this exciting new standard at the WQA Aquatech USA tradeshow in Orlando, FL on Thursday, March 20, at 9:00 am. This event will be open to all registered attendees who would like to learn more and receive the latest updates regarding NSF 401 Drinking Water Treatment Units – Emerging Compounds/Incidental Contaminants. I hope to see you there!