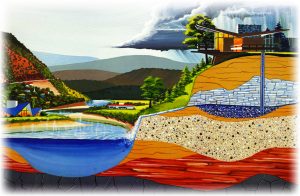 Over 1.1 billion people worldwide do not have access to clean drinking water. Over three million people each year die from waterborne diseases. Our fisheries and overall ecosystem health depend on clean water. Therefore, purifying our water through natural and artificial means continues to be a necessity of life. Children can get incredibly filthy playing in the dirt, but a well-functioning soil is a powerful physical, chemical and biological reactor that cleans the water moving through it. Most people recognize the soil as an effective filter. Just like the filter in an air conditioner filters dust in the air, soil contains a matrix of pores of different sizes that can physically filter particles out of water. The real effect of soil, however, is not physical filtering. Most important are the chemical and biological reactions that the soil promotes to remove pollutants and impurities from water.

Biological cleaning by soil
One gram of soil holds one billion or more microbes that Mother Nature uses to cycle organic and inorganic materials. For example, fungi and bacteria decompose organic matter that enters the soil in leachate from plants and animals. When organic pollutants enter the soil from air pollution or direct application to the soil, soil organisms can break them down by using the pollutant’s carbon as an energy source. Not all soil organisms participate in these reactions, so the removal of organic pollutants can take some time. Populations of microbes capable of decomposition need to build to suitable levels to be effective or appropriate enzymes that aid the breakdown must become active. Thus, some organic pollutants are more resistant to decomposition than others depending on their chemical structure. For example, organochloride pesticides tend to be more resistant to degradation by microbes than are the organophosphates.

Soil microbes work not only on organic chemicals in the water, but also on inorganic components. Probably the best example is wetland soils. Wetlands soils, sometimes referred to as nature’s kidney, change the chemistry of the water that enters them. The wetlands are saturated with water that creates a soil environment characterized by a lack of oxygen. Under these conditions nitrate is transformed to nitrogen gas and escapes to the atmosphere. This is significant when one realizes that wetlands often are the entrance pathway of water to rivers and lakes, and that nitrate is the number one inorganic pollutant of surface and subsurface waters. Wetlands provide an important service in pulling nitrates out of water and releasing nitrogen gas, and in turn, providing cleaner water downstream.

Chemical cleaning by soil
Still, many soil reactions that clean up water are purely chemical in nature. The soil has a net negative charge. Therefore, soil will form ionic bonds with anything with a positive charge and remove it from the water. It seems counter intuitive that soils can remove negatively charged chemicals, but it is possible. While chemicals like nitrate are negative and do not become adsorbed, chemicals like phosphate and sulfate can have very strong reactions with the soil surface. Phosphate, for example, undergoes a reaction where it becomes a part of the soil surface by forming a covalent bond with the soil. These bonds are formed with the soil clay, so the more clay, the more phosphate that can be removed. In fact, in most soils one does not expect phosphate, a major water pollutant, to leach through the soil. The way it gets into surface waters is by moving with the soil through erosion. Organic chemicals can also be removed by purely chemical reactions. Organic pollutant adsorption, such as adsorption of pesticides, depends on the type of chemical but tends to increase as the amount of organic matter in the soil increases.

Modern-day example
The soil is a great bioreactor if it is well managed. The secret to managing it well is to make sure we keep it in place: erosion control. If we do not manage erosion well, then the costs can be astronomical. Over the next 20 years, in order to maintain our drinking water, the US will spend $140 billion (USD). A classic example of how soils can clean water and do it at a reasonable cost is provided by the city of New York. The city gets its water from the Catskills. The water moving through those soils is cleaned by all the methods mentioned above. But over time, poor septic systems and poor land-use planning caused a decrease in drinking water quality. The city could have built a water treatment plant for $6 to $8 billion with an annual operating budget of over $300 million or could restore the quality of the soil ecosystem by changing watershed management. For a fraction of the cost, the city chose the latter. Not only does the city now have clean water but they are also protecting a $2 billion a year fishing industry in the area. Cities all over the US are looking at whether they can use soil to protect and clean their water resources, using New York as their example, all because soil is an outstanding bioreactor.

Nicholas Comerford, PhD, is a Professor in the Soil and Water Science Department at the University of Florida (UF)  and Director of the UF North Florida Research and Education Center. His expertise is forest soils and soil nutrient bioavailability, working in tropical and subtropical regions. Comerford is a Fellow in the Soil Science Society of America (SSSA); Senior Fulbright Fellow (Brazil); past Board of Director Member of the SSSA; past President of the SSSA; past Chairman of the Board of the Alliance of Crop, Soil and Environmental Science Societies Corporation. His international experience includes Research Fellow in the New Zealand Forest Research Institute, Executive Director of Global Research on the Environment and Agricultural Nexus for the 21st Century (GREAN) and Visiting Professor at Brazil’s Federal University of Viçosa, Federal University of Bahia and State University of Santa Cruz. He has published over 130 articles covering topics in forestry, soil science and soil/root interactions.