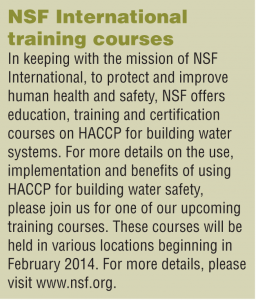 In keeping with the mission of NSF International, to protect and improve human health and safety, NSF offers education, training and certification courses on HACCP for building water systems. For more details on the use, implementation and benefits of using HACCP for building water safety, please join us for one of our upcoming training courses. These courses will be held in various locations beginning in February 2014. For more details, please visit www.nsf.org.

Many techniques, principles and processes are utilized to assure the safety of water supplies, from protection and treatment at the source, to the distribution system, to treatment at the point of entry and point of use. Hazard Analysis and Critical Control Point (HACCP) methodology is another tool that can be effectively applied to building water systems to help assure safety. The HACCP approach, which consists of a structured, systematic, cost-effective risk management process best known for its successful use in food safety, has proven effective for preventing harm associated with premise plumbing, cooling towers and other water systems in buildings.

Background
Every year, tens of thousands of preventable injuries and deaths are caused by exposure to microbial, chemical and physical hazards from building water systems. Microbial risks associated with building water systems are especially challenging to control. In the US, the water treated and distributed by community water systems generally complies with US EPA regulations and is safe for its intended use. However, microorganisms can enter plumbing systems in small numbers, attach to the inside surfaces of pipes and equipment, form a biofilm and amplify to very large numbers. Characteristics of building water systems conducive to microbial colonization include extensive networks of relatively small-diameter pipes that provide high surface-area-to-volume ratios, in which water can become tepid and stagnate for long periods of time. In addition, water in buildings is processed in many ways. For example, it may be conditioned, filtered, stored, heated, cooled and distributed. Processing alters the quality of the water, which increases the likelihood of microbial growth. Pathogens that have colonized the plumbing infrastructure may eventually be released into the environment (for example, through showerheads) and broadcast as infectious bioaerosols. Inhalation, especially by susceptible persons, can result in life-threatening, sometimes fatal, infection.

Specific microorganisms of concern include the protozoa Acanthamoeba, the bacteria Acinetobacter, Elizabethkingeria (Flavobacterium), Escherichia coli, Klebsiella, Legionella, nontuberculous mycobacteria (NTM), Pseudomonas, Stenotrophomonas and the fungi Aspergillus and Fusarium. Of these, the best known is Legionella. Legionella spp. are gram-negative, rod-shaped, non-spore-forming bacteria found in a wide range of freshwater environments in relatively low numbers.1 However, Legionella spp. thrive in certain human-made water environments, such as cooling towers, premise plumbing and pipes, and spas.

HACCP overview
HACCP methodology is a structured, systemic, cost-effective paradigm best known for its successful, widespread use in food safety. HACCP identifies specific, potentially hazardous agents and specifies measures for control to help ensure safety. HACCP is now mandated in the US for certain food production processes and has become the standard for food safety management systems around the world. However, most food safety applications of HACCP in the US are voluntary.

HACCP for building water systems has not been widely used in the US, due in part to the impression that HACCP is useful only for food safety. However, the application of HACCP to public water supplies was first proposed in 19944 and has been successfully implemented by a number of entities:

The seven principles of HACCP are:

Conclusion
The application of HACCP to building water safety is invaluable for protecting the overall health, safety and well-being of the public. Such programs have proven effective and practical for controlling the growth and dispersal of clinically significant pathogens in building water systems.

About the authors
Carolyn Gillilland is a Senior Project Manager in NSF International’s Global Water Programs. Previously, she served as a Supervising Toxicologist in NSF’s Toxicology Services Department. Gillilland has a BS Degree in environmental science with a focus in chemistry from the University of Michigan, Dearborn and an MS Degree in zoology with a specialization in environmental toxicology from Michigan State University. She can be reached via email at gillilland@nsf.org.

Aaron Rosenblatt is a Principal and co-Founder of Gordon & Rosenblatt LLC and Advisor to NSF International. He is a past board member of the International OzoneAssociation-PanAmerican Group (IOA-PAG); past member of the AWWA Disinfection and Disinfectants Committees and the Microbial and Disinfection By-Product (M/DBP) TechnicalAdvisory Workgroup; past Trustee of the Chemists’ Club of New York and past Chairman of the Chemists’ Club Library. Rosenblatt is a graduate of The Johns Hopkins University (BA).