Shutting a valve off too quickly downstream from a pump can produce an effect known as a water hammer (hydraulic shock) that can damage tanks and appliances with very high hydraulic pressure or vacuum development caused by the momentum of the moving fluid. We have all heard banging and rattling of pipes that result from it. Now we will look at ways to prevent it.

A one-inch pipe having a length of 100 feet contains four gallons of water weighing almost 34 pounds. If water is flowing in that pipe at 10 feet per second (a common design level) and a downstream valve is suddenly shut off, water hammer develops, sending the instantaneous shock wave of water pressure as high as 1,000 psi (or even higher). The shock wave that develops travels at the speed of sound (at 70°F, that’s over 4,800 ft/sec) and travels backwards until it hits something solid—a pump, a check valve or a filter tank), then forward and back, until the energy is dissipated.18 Such a spike can explode a media or cartridge filter causing serious flood damage and a liability headache for the manufacturer, seller, installer and everyone in between. The pressure spikes because water is an incompressible fluid. When it stops dead in its tracks by the rapid closure of a valve, the momentum has to go somewhere. There will be a spike in the upstream pressure along with a vacuum created in the downstream side of the valve. There is both an explosive and implosive force developed and both are equally damaging. The effects are accentuated if the pipe slopes downhill. Water hammer can also be caused by the sudden change of direction in a plumbing system or the introduction of fluid to a previously empty pipe by flipping on a pump.

I have seen 12-inch PVC explode when a 2,000-gpm pump was turned on, sending water into an empty pipe at a very high rate of flow (there was no length of pipe or filter bed filled with water to present any back pressure, just air) and then it came to the first 90-degree turn. Kablooie! Every foot of that pipe contained nearly six gallons of water weighing almost 50 pounds. Moving at 25 feet/second in the empty pipe and making a run of nearly 100 feet, that elbow was hit with 5,000 pounds of mass that suddenly had to change direction. That elbow shattered into small pieces taking most of the piping support structure and part of a cinder block wall with it.

Calculating the hammer
There is a simple equation for calculating the pressure spike inside a pipe as a result of water hammer (see Equation 6).18

Equation 6. Calculation for determining the effects of water hammer

A linear flow of 10 ft/sec in a one-inch pipe represents a volumetric flow of 24.3 gpm. This would be considered very high flow and a 500-foot run would not be the usual for residential or even commercial situations but a long run in an industrial plant or a farm would be common.

Note: Equation 6 assumes an incompressible fluid and a non-elastic pipe or container. The results for pressure are in psi. For metric systems, the pressure is in pascals (Pa), the velocity is in meters/sec, length is in meters and the conversion constant is 0.0135. 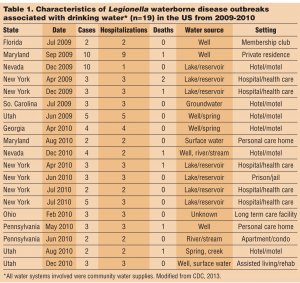 Do water hammers pose a threat?
Most pipe and filter tanks are rated for 125 psi operational pressure and exhibit actual burst values of around 600 psi. While they may survive mild hydraulic shocks and simply make noise, they will not survive severe water hammer. It is not a matter of simply replacing the broken component. A break under pressure can cause extensive water damage to surrounding equipment, damage floors, walls and ceilings plus the filters themselves. In the case of my 12-inch PVC pipe experience, the damage can include personal injury and worse! Civil engineering with long delivery runs and large flows at the municipal level and power plants are particularly concerned with the negative effects of hydraulic shock. There is an entire science devoted to calculating ways to control flows in order to minimize shock issues.

Column separation
When a valve is closed suddenly, the momentum of the fluid immediately downstream tends to continue downstream. This creates a high pressure drop that can actually boil the liquid and cause vapor to form in the vacuum. When the vapor re-condenses to liquid, the bubble collapses and the separated liquid columns slam back together, creating a sudden high rise in pressure. This is equally damaging to pipes, machinery and support structures. Many such separations can occur during a single water hammer event as the shock wave slams back and forth.19

Controlling water hammer
The following may help to reduce the occurrence of a water hammer event:

To control surge pressure in situations where excessive pressures can develop by operating a pump with all valves closed, pressure relief valves can be installed between the pump discharge and the pipeline. Also, pressure relief valves or surge chambers should be installed on the discharge side of the check valve where backflow may occur. Air trapped in a pipeline can compress and expand in the pipeline, causing velocity changes which can contribute to water hammer. To minimize such problems, prevent air from accumulating in the system by installing air-relief valves at the high points and both ends of the pipeline.

Other general recommendations for minimizing water hammer suggest that for long pipelines sloping up from the pump, install non-slam check valves designed to close at zero velocity and before the column of water above the pump has an opportunity to move back. 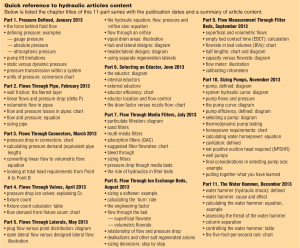 The five-foot-per-second rule
To minimize water hammer, especially for plastic (PVC) pipe, water velocities should be limited to 5 ft/sec unless special considerations are given for controlling water hammer. Most experts agree that the velocity should never exceed 10 ft/sec. Also, the velocity of flow in the suction pipe of centrifugal pumps should be kept between 2 and 3 ft/sec in order to prevent cavitation. Table 7 lists the maximum flowrates recommended for different ID pipe sizes using the five-foot-per-second rule.

Conclusions
The high pressure created by the sudden starting or stopping of the flow of water inside a closed system (pipe, tank, pump or cartridge housing) can do serious damage to the equipment and poses a danger to equipment and personnel that might be in the area. Water hammer can create pressures in the 1,000-psi range in small equipment and in excess of 10,000 psi in large systems with long runs. Avoid water hammer by slowing the linear flow, using slow-acting valves and slower starting pumps.