ResinTech, Inc. has relocated its west coast facility to a new 26,000-square-foot facility in Gardena, CA. It provides more space and the ability to stock a larger inventory of the company’s ion exchange resins, activated carbon and fiberglass tanks. The Aries FilterWorks division of ResinTech will have expanded production capabilities and stocking of filter cartridges and systems. Plans are also in the works to include a resin testing and water analysis laboratory as part of the new offices.

Mid-west operations for Performance Water Products, Inc. has expanded, grow- ing from 4,900 to 13,800 square feet and relocated to a new facility in Mukwonago, WI, eight miles from its former location in Eagle, WI. The new facility affords space to consolidate and inventory more product and the ability to work with loyal customers to engineer and build larger equipment for the commercial/industrial market. The new address is 823 Swan Drive, Mukwonago, WI 53149 and the new fax number is (262) 363-9690.

Filtrex and HaloSource have committed to sponsoring the WWIF–FWQA 2014 Golf Tournament to be held in Orlando, FL on March 18, 2014 during the upcoming WQA Aquatech Annual Convention and Trade Show. The commitment was made at separate meetings during the recent Aquatech trade show in Amsterdam. The foundation will be reaching out to other members of the industry to participate in the golf tournament or to become sponsors. This year, the tournament is being held in cooperation with the Florida Water Quality Association (FWQA); the funds raised will benefit both organizations. For more information, visit the foundation website as details are updated.

The amount of new desalination capacity expected to come online during 2013 is 50-percent more than last year’s total, according to new data from the International Desalination Association and GWI DesalData. Desalination plants with a total capacity of six million cubic meters per day (m3/d) are expected to come on line during 2013, compared with four million m3/d in 2012. While this year’s growth is somewhat lower than 2010, the data shows that demand for desalination continues to grow, with an increasing proportion of that growth coming from the industrial sector.

The results of a new study released by the International Bottled Water Association (IBWA) show that the amount of water used to produce bottled water products is less than all other types of packaged beverages. On average, only 1.39 liters of water is used to produce every one liter of finished bottled water. This study was produced by Antea Group, an independent third-party consultant that conducted the data collection process, verification, analysis and reporting. In total, nine IBWA member companies and one industry peer contributed to the study, which represents 14.5 million liters of bottled water production—an impressive 43 percent of total 2011 US bottled water consumption. This exemplary measure of first-year participation demonstrates the dedication of North American bottlers to better understand the industry’s wateruse performance.

A record number of 22,589 registrants and 971 companies using 297,400 net square feet (27,629.36 m2) of exhibit space has designated WEFTEC 2013 as the largest in the organization’s 86-year history. As the location for WEF’s first-ever conference in 1928, Chicago has proven to be a popular destination . The last time WEFTEC was held in Chicago was in 2008—an equally successful event that set the previous record of 21,950 registrants. Students from the University of South Florida and the University of British Columbia were announced as winners of the 2013 Student Design Competition. The University of South Florida team’s project, City of St. Petersburg Biogass Utilization Project, won in the wastewater design category and the University of British Columbia team’s project, Microalgae Cultivation and Harvesting: Design of Pilot Facilities at the Annacis Wastewater Academy, won in the environmental design category. The competition promotes real-world design experience for students interested in pursuing an education and/or career in water/wastewater engineering and sciences. Both teams received certificates and a $2,500 (USD) award as announced by WEF Past President Jeanette Brown.

Mueller Water Products, Inc. announced that its Mueller Co. Albertville, AL plant has earned the coveted Star Certification from OSHA. Star is the highest level of recognition offered through OSHA’s Voluntary Protection Program. Mueller Co.’s Albertville facility becomes only the sixth foundry in the US, and the only one in Alabama and the Southeast, to earn this designation. Company employees and families celebrated this achievement on Saturday, October 19 at a company picnic where the coveted OSHA Star flag was unveiled.

Aquionics honored by IUVA Aquionics has been presented with the 2013 International Ultraviolet Association (IUVA) Product Innovation Award for its PearlAqua UV-C LED water disinfection device. According to IUVA, the biennial award recognizes an exemplary product or process involving UV applications. Each nominated product or process is reviewed for innovation in design and engineering, as well as its impact on society. Judges consist of a committee of industry experts representing academia, regulators, manufacturers, users and design consultants. Pool association changes name SPEC has changed its name to the California Pool & Spa Association (CPSA) in order to bring clarity to legislators, regulators, potential members and the public with regard to whom the association represents and to position CPSA as the go-to organization for government officials and the public on swimming pool and spa issues. For over 35 years, SPEC represented all facets of the swimming pool and spa industry in California, including pool builders, equipment manufacturers, the pool service industry, distributors, retailers, designers and subcontractors. California is the largest market in the country for the swimming pool and spa industry and related products and services. How California performs as a market and what happens there politically relative to key issues affecting the industry will have an effect the swimming pool and spa industry across the nation.

Dow Water Process & Solutions, together with De Lage Landen Financial Services (DLL), announced the industry’s first RO element leasing program for FILMTEC™ elements. Through this collaborative offering, businesses and municipalities in North America can now benefit from innovative financing to ease element acquisition and affordability and to better manage cash flow. The new program, which is also available for purchases made via DW&PS channel partner OEMs, is designed to give end users flexibility whether their acquisition is planned or not. Additionally, the leasing program will give end users the best opportunity to consistently use the latest DW&PS RO technology, while continually staying within warranty term coverage.

Envirogen Technologies, Inc. announced the successful start-up of a large-scale fluidized bed bioreactor (FBR) system for American Pacific Corporation (AMPAC) to achieve the biodegradation of perchlorate and other constituents from groundwater in the area of a former manufacturing facility in Henderson, NV. The 1.2-million-gallon-per-day (MGD) (4.5-million-liter-per-day) capacity system replaces a smaller biological system that had been in service since 2006, and utilizes Envirogen’s patented FBR technology in a custom configuration to reduce influent concentrations of perchlorate of up to 500 ppm to non-detectable levels prior to
surface discharge.

Purolite Corp. announced that after two years of extensive research and development it has a solution to the multiple issues surrounding the Fukushima radioactive water crisis. The proprietary process incorporates a total solution to include the four main points identified by TEPCO in its most recent request for proposals. Purolite’s technical experts worked in cooperation with major Japanese companies to develop a unique solution to this complex problem. Its proprietary technology effectively removes identified contaminants and will help solve Fukushima Daiichi’s environmental problems. 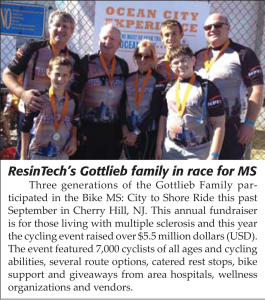