On October 9, the US Centers for Disease Control and Prevention (CDC) confirmed that the brain-eating amoeba, Naegleria fowleri, was found in at least five test sites in a Louisiana public water system. In September, another nearby public waterworks also tested positive following the death of an infected four-year old. Water distribution networks are vulnerable to amoebic contamination where populations of the harmful pathogens can increase where proper chlorine residuals are difficult to maintain.

Fatal Naegleria infections Since 1962, approximately 130 people in the US had been diagnosed  with primary amoebic meningoencephalitis (PAM) caused by Naegleria fowleri. PAM is a severe brain infection that can occur after the free-living ameba enters the human body through the nose. Although infections are still rare, Naegleria is known to proliferate at higher water temperatures. Historically, July, August and September are the most likely months for infections to occur. Once infected, the onset of illness is rapid, beginning with symptoms of headache, fever, nausea or vomiting. Initial symptoms occur within about five days of exposure and death after about another five to seven days. Fatal outcomes are preceded by severe brain hemorrhaging and tissue necrosis manifested with symptoms of stiff neck, confusion and seizures. The fatality rate of N. fowleri infection is greater than 99 percent. Only two people in the US (California,1979;  Arkansas, 2013) and one in Mexico (2003) have been documented to survive infection. The most recent survivor was a 12-year-old girl, hospitalized for nearly two months after swimming at a water park with a sandy bottom lake. Early detection and a series of experimental treatments are credited with her survival.

Waterborne infection routes
The case that recently raised concern in potable water supplies occurred in Louisiana. The infection was traced to the use of a Slip ‘n Slide toy where contaminated water was presumably forced into the nose of the four-year-old boy. After about three weeks, the boy passed away from PAM. According to CDC officials, colonization of Naegleria in treated water supplies has not been previously documented in the US. Drinking water with Naegleria fowleri is not a risk to humans, as the organism cannot infect hosts through the intestinal tract. The route of infection is via nasal passages, requiring water to enter the nose. Water that is heated or stagnant in storage tanks, distribution lines of public systems or premise plumbing can provide prime breeding grounds for the pathogen.

Drinking water supplies have been implicated before. In 2002, two five-year-old children, both living in Maricopa County, AZ, died of meningitis caused by Naegleria fowleri. An untreated groundwater supply from a private water company serving 6,000 residents was determined to be their common exposure source: one via the bathtub and the other swimming in an untreated pool filled with the contaminated water. Environmental testing showed that the groundwater supply from one boy’s home and the refrigerator filter from the nearby home of the second boy’s grandparents, where he reportedly spent a lot of time, were both positive for N. fowleri. Samples from the homes’ bathroom and kitchen pipes and sink traps found that 17/19 samples were positive for N. fowleri. Filtered bathwater from both of the homes also tested positive.

Domestic water supply contamination was reported in South Australia and traced to growth in overland pipes during a period of hot weather. The exposure sources included a backyard wading pool and bathtub. Others found N. fowleri in 22 percent of hot water samples collected from six hospital water systems and 89 percent (17/19) of household taps and drain traps (see On Tap, November 2007).

Atypical exposures
Typically, Naegleria deaths are traced back to behaviors such as swimming in natural lakes, rivers or other warm bodies of water. According to a Louisiana state health officer interviewed after the recent Louisiana deaths: “Families can take simple steps to protect themselves from exposure to this amoeba, the most important being to avoid allowing water to go up your nose while bathing or swimming in a pool.” Is this really a simple step? In my experience, getting water up your nose while swimming has always been a part of swimming. Rarely is it an intentional act. Recent evidence of Naegleria in public water supplies and home tap water systems reveals an unanticipated risk. Despite precautions in recreational water venues, populations are still at risk of N. fowleri. Consumers have the expectation that a nearly always fatal amoeba not be present in their potable water supplies. Some cases of Naegleria deaths were due to intentional introduction of water in the nose (i.e., via sniffing water during religious practices and neti pots used to flush sinuses) but more often exposure was accidental or incidental. The CDC recommends that potable water intentionally used in the nasal passages should be boiled for three minutes, distilled or bottled sterile or filtered with a one-micron filter. Further, when swimming, one should keep their nose shut by using nose clips or refraining from head submersion. The same recommendations would therefore apply to bathing or playing in potable water supplies as well. Controlling swimming/bathing behaviors, however, promises to be difficult, especially with young children.

Protecting potable water supplies
Protecting consumers from the source is a preferred strategy for reducing Naegleria exposures rather than relying on potentially unrealistic behavioral modifications. Naegleria can be removed from potable water sources via submicron filtration, chlorination and ultraviolet light. Following domestic water outbreaks of Naegleria fowleri in Australia, disinfectant protocols were improved and no cases have been reported from drinking water supplies since 1981.

Increasing temperatures increase the need for maintaining a chlorine disinfectant residual in the water distribution system. The greater the distance from the treatment plant, the greater the likelihood of diminishing chlorine and greater numbers of a variety of bacterial and amoebic pathogens capable of growth in the environment. US water utilities must adopt a more diligent approach to maintaining chlorine residuals in the distribution system. In light of system management challenges, POE filtration and purification strategies remain effective options for consumer control.

States where cases of Naegleria fowleri have occurred. N=128; state of exposure unknown for four cases. Map does not picture one case from the US Virgin Islands. Photo courtesy of CDC. 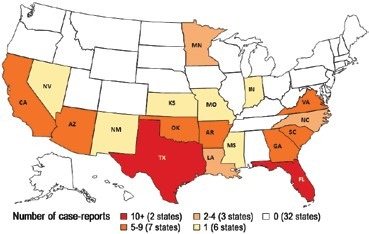