NSF/ANSI 58 Reverse Osmosis Drinking Water Treatment Systems is the American National Standard for POU RO systems. This standard includes requirements addressing various aspects of these systems, including safety of materials in contact with drinking water, structural integrity, TDS reduction performance, efficiency rating, recovery rating, contaminant reduction performance and information for the end user. Like other NSF/ANSI Drinking Water Treatment Unit (DWTU) standards, it is subject to continuous improvement through a consensus process administered by NSF and guided by the NSF Joint Committee on Drinking Water Treatment Units. This committee uses a variety of tools, such as an online workspace, physical meetings and conference calls to conduct its mission to move forward with development and adoption of new standards and updates to current standards to reflect new regulatory requirements, technological advances and other changes. As a result of this continuous improvement process, NSF/ANSI-2012a was recently published and includes two revised requirements:

This change established that for any filter conforming to NSF/ANSI 42, NSF/ANSI 53 and/or NSF/ANSI 58, the capacity cannot exceed the lowest capacity for any contaminant, regardless of the standard. For example, a filter certified for 500-gallon capacity for lead reduction under NSF/ANSI 53 could not have a claimed 2,000-gallon capacity for chlorine reduction under NSF/ANSI 42, even though the filter might be capable of reducing chlorine for 2,000 gallons. This change was a clarification to what had been a long-standing interpretation that was not clearly documented in the standards. It is relevant to NSF/ANSI 58 because activated carbon post-filters can have claims for VOC reduction under this standard. For a more in-depth discussion regarding the singlecapacity claim issue, please see October 2013 Water Matters.

Sampling regime: days two through four
The following discussion relates specifically to POU RO systems with storage tanks and automatic shut-off valves, which is by far the most prevalent product configuration. There are some variations in the test protocol for systems without storage tanks and/or without automatic shut-off valves, the most significant being systems that cannot claim an efficiency rating. TDS reduction and membrane-based contaminant reduction tests in NSF/ANSI 58 feature testing conducted according to a seven-day protocol. Days one and seven involve sampling under two conditions: first, complete product-water storage tank fills and second, minimal partial tank fills, to assess performance under these varying conditions. For TDS reduction testing, days one and seven also involve measurement of the daily production rate, efficiency rating and recovery rating of the system. Days five and six of the test involve a stagnation period, in which no samples are taken and no product water is withdrawn from the storage tank. This leaves days two through four.

Previously, the standard had indicated that samples were to be collected every six hours on days two through four. Every other test under the NSF/ANSI DWTU Standards, however, involves a 16-hour daily test operation. This means that a laboratory would need to operate an additional two hours per day to perform all of the required sampling on days two through four when testing POU RO systems. This additional laboratory operation requirement for POU RO samples only would lead to increased costs for testing these systems.

In practice, several laboratories performing this type of testing were already interpreting that samples on days two through four are collected at the beginning the day, after six hours of operation and after 12 hours of operation. This interpretation helped keep testing costs in check and also resulted in an operational regime that was nearly identical to the literal interpretation of the standard language.

So, the NSF Joint Committee on Drinking Water Treatments reviewed the situation and ultimately decided to revise the standard language describing the test method to be officially in line with how these several laboratories were already interpreting the standard. NSF/ANSI 58-2012a requires that on days two through four, samples are collected at the beginning of the day, after six hours of operation and after 12 hours of operation. A summary of the operations and sample collection regime for these tests is included in Figure 1. 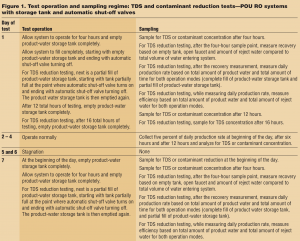 Frequent updates
Although the NSF/ANSI DWTU Standards have been around for many years, they are continually being updated. Keeping up to date is important for manufacturers who claim conformance to these standards, especially if they hold certifications. Although many changes to the standards are relatively minor and don’t require retesting to establish continued conformance (such as the changes described here), occasionally there are significant changes that can require retesting and even product modifications. One important tool to help keep track of these changes is the Foreword of each standard. This section, included after the Table of Contents, includes a summary of all changes included in the current edition of the standard. It is recommended to check the Foreword each time there is a new edition of the standard to quickly assess the changes in that edition.

Rick Andrew is NSF’s Director of Global Business Development–Water Systems. Previously, he served as General Manager of NSF’s Drinking Water Treatment Units (POU/POE), ERS (Protocols) and Biosafety Cabinetry Programs. Andrew has a Bachelor’s Degree in chemistry and an MBA from the University of Michigan. He can be reached at (800) NSF-MARK or email: Andrew@nsf.org