Introduction
The High Desert Power Project, LLC is a large California power generator using  second-stage reaction tank, which receives lime and soda ash, raising the pH to 10.5-11.0 to further precipitate calcium carbonate and microfiltration (MF) technology to treat and reuse cooling tower blowdown in a ZLD (zero liquid discharge) process. In operation since 2003, the process consists of chemical addition to the blowdown water to effect hardness and silica removal by precipitation. The precipitated solids are then continuously removed with microfiltration technology. The MF treated water (permeate) is pH adjusted and directed to a first-stage RO unit, where a portion of its permeate is sent directly to the cooling tower as makeup water and the remainder to a polishing RO with its permeate treated with continuous deionization (CDI) technology for boiler feed. The concentrate stream from the first-stage RO unit is sent to a second-stage RO with its permeate utilized as cooling tower makeup and concentrate dewatered in a crystallizer. The polishing RO concentrate stream is utilized as cooling tower makeup water (see Figure 1).

Process description
The cooling tower is fed by clarified California Aqueduct water. Cooling tower blowdown is pumped to a first-stage reaction tank. Ferric sulfate, soda ash, magnesium chloride and sodium hypochlorite (bleach) are added; the pH in this tank is approximately 8.5, which initiates precipitation of calcium carbonate and silica. Effluent from the first-stage reaction tank overflows into a second-stage reaction tank, which receives lime and soda ash, raising the pH to 10.5-11.0
to further precipitate calcium carbonate and silica. This tank overflows into a concentration tank, which also receives the concentrate (reject) stream from a microfiltration system. The concentration tank collects precipitated and chemically saturated solids and the resulting sludge is fed to a sludge thickener tank. The suspended solids slurry in the concentration tank is directed to an MF system for virtually complete removal of these solids. The MF permeate (that portion of the feed stream that passes through the membrane) flows into the pH adjustment tank, where it receives sodium bisulfite to neutralize chlorine (from the bleach addition) in the tank and hydrochloric acid to lower the pH to 6.3. 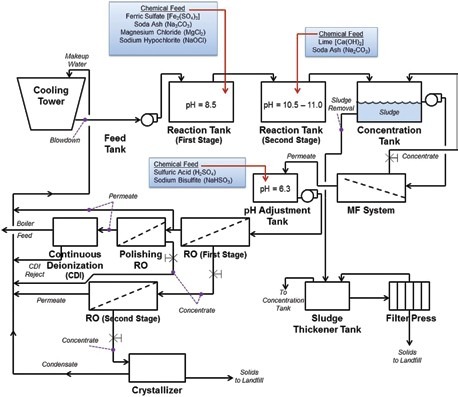 Treatment requirements
To allow reuse of cooling tower blowdown water as boiler feed, it is necessary to employ a number of advanced technologies. Usually, suspended solids have to be removed, followed by dissolved solids. The technologies required to remove dissolved solids (RO, CDI and others) are deleteriously affected by suspended solids and slightly soluble salts that precipitate upon concentration. Almost all water supplies, with the exception of seawater, are saturated in hardness compounds containing calcium and magnesium cations. Additionally, many supplies also have high concentrations of silica, another relatively insoluble contaminant, as well as sulfate salts. Conventional lime softening is the traditional hardness reduction process for high-volume flows and involves adding lime [Ca (OH)2] and soda ash (Na2CO3). As the pH is increased to 9.5-10 from the lime addition, calcium carbonate, magnesium hydroxide and magnesium carbonate precipitate. Magnesium hydroxide also removes silica via absorption as it precipitates. Virtually all RO membrane elements sold today are of the spiral-wound configuration (see Figure 2). Although the least expensive of all the membrane element configurations, spiralwound RO membrane elements are the most susceptible to fouling fouling by suspended solids. In many cases, the normal multimedia filtration process, often utilized in lime softening, does not provide adequate suspended solids removal to minimize membrane fouling. This is where the superior filtration capabilities of MF technology can be exploited.

Microfiltration
Microfiltration is a crossflow, pressure driven membrane separation technology designed to remove submicron (and larger) suspended solids from water supplies. It differs from conventional (dead-end) filtration in that in this process, the entire water supply passes through the filter medium, whereas in the crossflow process, a portion passes through the membrane, becoming permeate, while the remainder exits the system as concentrate, carrying away almost all of the suspended solids. Figure 3 compares these two processes. The mechanism of microfiltration is depicted in Figure 4. The MF membranes used in this application are TMF tubular membranes, depicted in Figure 5. Specifically, the tubes are one-inch ID with a polyethylene substrate supporting a PVDF (polyvinylene fluoride) layer with 0.10μ pores. The membrane modules are illustrated in Figure 6. Each membrane module consists of ten 72-inch long tubes enclosed inside a PVC housing. Specifications on the modules and tubes are included in Table 1. The feed flow is down the center of the tube (lumen feed) with permeate passing through the tubular wall and collected from the area around the outside of the tubes inside the housing. A total of 216 modules constitute this MF system. 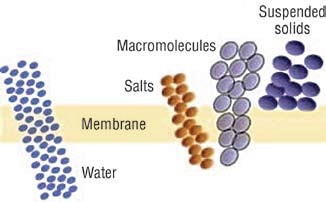 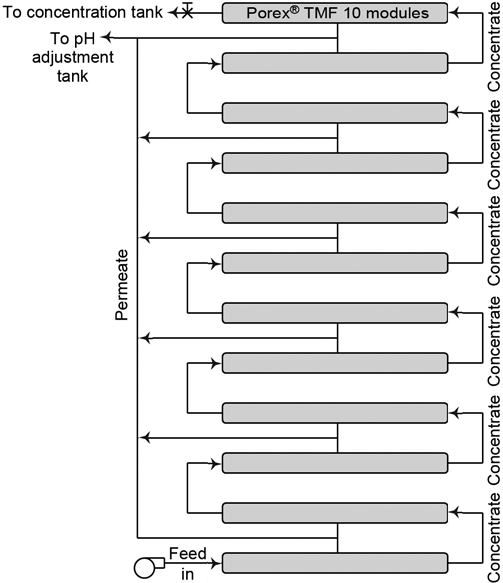 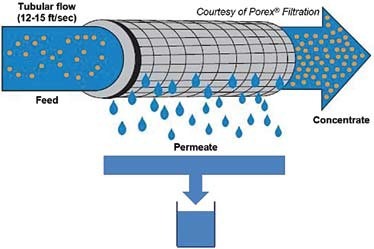 System design
With the TMF system, modules are divided into six skids, each containing three trains of 12 modules (see Figure 7) linked in series. The feed stream enters one end of the first module with the concentrate exiting the other end as feed for the next module. This flow continues through the 12 modules and returns to the concentration tank. Meanwhile, the permeate from each module is collected in parallel and fed to a header where it is directed to the pH adjustment tank for further treatment by reverse osmosis. Table 2 summarizes the performance of this MF system. 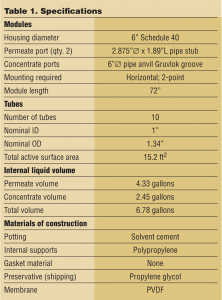 Reverse osmosis
The first-stage RO removes dissolved solids with a portion of its permeate supplying the cooling tower with makeup water. The remaining permeate flow is directed to a polishing RO for additional dissolved solids removal and then further purified in a CDI unit to produce high-quality boiler feedwater. The concentrate streams from the first-stage and polishing RO units are combined and fed to a second-stage RO with its permeate utilized as cooling tower makeup water, its concentrate treated in a crystallizer to produce solids for landfilling and the condensate used for cooling water makeup. As the MF process so effectively removes suspended solids, the RO concentrate streams could actually be returned to the front end of the system for further treatment. Table 3 lists the feed and permeate rates for the RO systems; along with the resulting recovery calculations (permeate rate ÷ feed rate) for each. 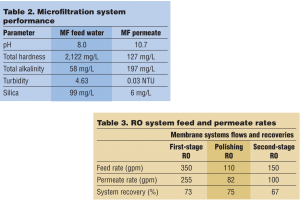 Cleaning
Because the MF system continually dewaters the precipitated hardness and silica solids, removing filtered water and returning the solids to the concentration tank, these solids steadily  increase in this tank to five percent (wt%). At this point, the solids are drained into the sludge thickener tank ahead of the filter press. As these solids in the concentration tank increase, the likelihood of fouling inside the tubular membrane elements also increases, which reduces the permeate flow through the membrane. To minimize this, the velocity of liquid is maintained at a high flowrate (12-15 ft/sec) to ensure turbulence inside the membrane elements.

The idyllic climate of southern California is not only attractive to two-legged creatures, but also to microorganisms. When the weather turns hot, bacteria proliferate, resulting in significant biofouling in the treatment system. Although chlorine is added to reduce bacterial activity, the high pH environment reduces the efficacy of this disinfectant. Care must also be taken to ensure that is completely removed prior to the RO units. When fouling increases to a certain point, a number of procedures can be employed to restore flux, including backpulsing with air or permeate, backwashing with permeate or interrupting the flow through the modules to allow the membranes to ‘relax’ and fouling material to drop off the membrane surface.

Acid cleaning. When the permeate rate from a skid drops to approximately 60 gpm, chemical cleaning is required. Usually, the modules are initially cleaned with a 3-5 percent hydrochloric  acid (HCl) solution to dissolve accumulated calcium carbonate and other acid-soluble deposits. Utilizing a dedicated clean-in-place (CIP) system, the acid solution is pumped into the skid; this cleaning solution is circulated through the MF modules for 15 minutes, followed by a 45-minute soak. The solution is then recirculated through the membrane system for another 45 minutes. This solution is then returned to the CIP storage tank and the modules flushed and rinsed with collected water, which is also returned to the rinse tank for reuse. When the rinse water becomes too concentrated, it is recycled to the first-stage reaction tank. Caustic cleaning. When acid cleaning is no longer effective in restoring the flux rate (usually between one and four times per month—a function of the time of year), a high pH cleaning is performed. This CIP system utilizes sodium hydroxide (NaOH) and sodium hypochlorite (NaOCl) in a cleaning solution containing 12-15 percent NaOCl at a pH of 12-13. This cleaning step is effective in removing biofilm and other organic foulants. The solution is circulated through the MF modules for 30 minutes, followed by a 150-minute soak and 30 minutes of recirculation. The MF system is designed with an extra skid to ensure that one is always available for these cleaning processes, without affecting the total plant processing rate.

Conclusions
Each component in this system contributes to the overall success of this unique design. The chemical additions to the reaction tanks result in hardness and silica precipitation. The MF system continuously removes clarified water from the solids. This treated water is further polished with RO technology to remove salts to either generate cooling tower makeup water or to feed CDI technology to produce boiler feedwater. The effectiveness of MF technology is underscored by the fact that the RO units can recover a very high percentage of the treated water for complete reuse. In addition, the RO membranes need cleaning no more frequently than every six months. The sludge resulting from hardness and silica precipitation is dewatered in a filter press and landfilled. The liquid stream from the filter press is redirected to the MF system, while the concentrated salts from the RO units are rendered insoluble in a crystallizer with these solids landfilled. The crystallizer condensate is also used as cooling tower makeup.

Peter S. Cartwright, PE, CWS-VI, is President of Cartwright Consult- ing Company. He has been in the water treatment industry since 1974, has authored over 125 articles, presented over 125 lectures in conferences around the world and has been awarded three patents. Cartwright has chaired several WQA committees and task forces and has received the organization’s Award of Merit. A member of WC&P Technical Review Committee since 1996, his expertise in- cludes high-technology separation processes such as RO, UF, MF, UF electrodialysis, deionization, carbon adsorption, ozonation and distillation. Cartwright is also Technical Consultant to the Canadian Water Quality Association. He can be reached at: (952) 854-4911; fax (952) 854-6964; pscartwright@msn.com or www. cartwright-consulting.com.