A great advance in RO technology goes fallow
One of the best water savings and convenience advances in the world of undersink RO drinking water systems is the concept of ‘water-on-water’ (WOW) RO. WOW is not new. Early patents on the concept expired decades ago. The modern world, however, has failed to embrace it. 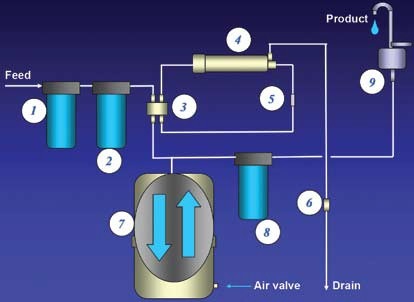 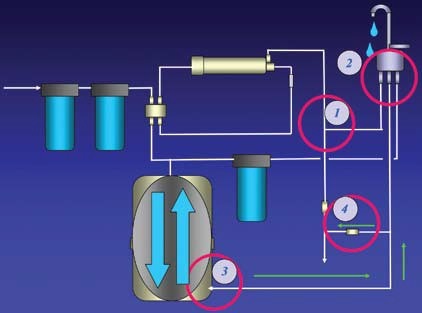 Feed water at city pressure is introduced and passes through a 5μ (micron) sediment filter (1) to remove dirt and rust to protect the carbon filter and the membrane. It then goes through a GAC (carbon) filter (2) to remove chlorine for the protection of the membrane (4). A shut-off control (3) senses the differential pressure between the feed and the back pressure from the storage tank (7) and shuts down the inlet feed (at the shut-off control) when the back pressure is approximately 65 percent of the feed pressure. Water passing through the membrane exits from two ports: a product water port and a reject port. Backflow to the membrane is prevented by a check valve (5) in the product line. To hold pressure on the membrane (for production), a drain line flow control (6) is placed in the reject line. Product water flows to the pneumatic storage tank (7). Upon demand, water is dispensed from the storage tank through a countertop faucet (9) and passes through a polishing carbon (or other) filter (8) en route.

By the numbers
To put numbers on Figure 1, let’s assume a 60-psi feed pressure and a 35-gpd thin-film composite polyamide membrane. Our drain line flow control (DLFC) is generally three or four times the production rate, which at 35 gpd or 132.5 liters/day, results in a production rate of 92 cc/min and a DLFC of 350 cc/min. We fill the underside of our pneumatic tank (through the air valve) with 7 psi air and our storage tank is the typical four-gallon model. As our production begins, our net driving pressure for the RO is our feed pressure of 60 psi minus our tank backpressure of 7 psi for a net production pressure of 53 psi. The initial production rate is the ratio of the net pressure to the rated production (at 60 psi net) of 35 gpd or 53/60 x 35 gpd = 30.9 gpd. DLFC/production ratio (known as reject ratio) goes from (350/92 or 3.8:1 to 30.9 gpd or 81 cc/min: 350/81 = 4.3:1. This means that for every gallon of produced RO water, we send 4.3 gallons down the drain. But it gets better.

As our storage tank fills, the air layer at the bottom of the pneumatic bladder compresses. At first, the 7 psi completely filled the tank. When the tank is half filled with product, the air space is cut  in half and the back pressure has doubled to 14 psi. Thus, production driving force is now 60 minus 14 or 46 psi. Production is 46/60 x 35 gpd or 26.25 gpd (= 69 cc/min) and reject ratio is now 350/69 = 5.1:1. By the time the tank is three-quarters full, the backpressure has grown to 28 psi and production is down to 49 cc/min. The reject ratio has grown to 7.1:1. Just before the tank is filled to the point of shutting down the system (at 40 psi backpressure), the production is down to 11.7 gpd or 31 cc/min and the reject ratio is 11.3:1. For every gallon of production, we waste 11.3 gallons of feed water.

Water delivery
Our tank is finally filled. The shut-off valve is triggered. The air space in the tank is at 40 psi and has compressed (40/7 = 5.7 times). Our tank does not hold four gallons due to the air space. It holds (1–1/5.7) or approximately 80 percent ~ 3.2 gallons. When we open the delivery faucet, the initial dispensing pressure is 40 psi (but it drops off as the tank empties, due to the expanding air space dropping in pressure). If we are only drawing off a quart or a liter of water, the RO restarts, but not from the beginning. It restarts against a very high backpressure of about 35 psi. It takes nearly 30 minutes to replace the quart we took and meanwhile, 350 cc/min continues down the drain each and every minute. This is not made up. This is how the typical RO operates. Since our usual draw is only a liter or so, the reject ratio is almost always above 10:1. In addition, the  product quality suffers from the lower net driving force average and instead of the 5 to 6 ppm TDS product we saw initially, the TDS has crept up to 20 to 25 TDS. This is not bad but it is not what it could be.

Enter the WOW
Figure 2 shows the basic set up for the WOW RO. On the surface it looks the same with prefilters, a shut-off valve, membrane housing, storage tank and polishing filter. But as we look more closely, there seems to be more tubing and a few extra parts. Most of the components are the same but there is a difference, starting with the reject water stream. The line tees off at (1) and goes to a special faucet (2). A second leg of the faucet is directed to the bottom of the storage tank (3) where the Schraeder (air stem) valve has been removed and replaced by a 0.25-inch push-on fitting. The redirected reject stream is also teed and the extra leg goes to a secondary DLFC and on to the drain. Product water from the tank is plumbed to the third leg of the special faucet, which dispenses water on demand. This leg must shut off when the faucet is not in use. This has been a very hard faucet to locate.

WOW operation
Generically, there are two switches in this system that have to operate simultaneously. One is the faucet on/off that actually provides the ‘push’ water for pressurizing the tank and the second is the tank dispensing on/off that allows the water to exit and also allows the tank to gain pressure when it is full, thus allowing the shut-off valve to function. When the faucet is opened, reject water rushes past the membrane (giving it a beneficial fast flush) at full line pressure and is directed to the bottom of the storage tank. The tank is pressurized at 60 psi and product water is fed to the faucet where it flows out under full line pressure. It maintains this flowrate until the tank is either emptied or the faucet is turned off. At this point, the RO turns back on and the tank begins to fill. The water in the bottom of the storage tank is pushed out through a generous 350-cc/min DLFC but at a flowrate only equal to the production rate of the RO, which is only 92 cc/min.

Essentially, there is no backpressure created at the bottom of the tank. It fills to its full capacity at the 92-cc/min production rate. There is no air space at the bottom of the tank so the tank fills up completely. Once full, the pressure rises very rapidly, reaching a shut-off backpressure of 40 psi within a few seconds after filling. Here’s the bonus: because we have a rapid forward flush every time water is dispensed, there is no need for the overly generous DLFC to prevent scaling. We match the DLFC with the production rate or 100 cc/min. Since the fill rate for the tank and the reject are the same, the reject ration is 1:1. We use an equal amount of water (fast-flush volume) to dispense water. We use a gallon to push a gallon plus the gallon to make a gallon, so the true ratio is 2:1. We lose two gallons of water for every gallon we produce (instead of 11.3). That’s a reduction of 82 percent! In addition we have increased the storage capacity of the tank from 80 percent up to 100 percent, or an increase of 25 percent. We dispense at a full line pressure of 60 psi all the way to the bottom and refill at the full 35 gpd all the way to the top. Higher production and higher quality result because there is no backpressure on the membrane.

Variations on the theme
In Figure 2, we show the location of the ‘flushing tee’ on the post-production side of the membrane, which allows a fast flush through the membrane. We can also locate the tee after the prefilters, in front of the membrane or in the feed line in front of the prefilters. These considerations do not provide a fast flush feature but may provide advantages on commercial systems that provide separate flush cycles and need high dispensing rates for storage. Commercial systems will probably not use a faucet for the product dispensing. WOW lends itself nicely to automated valves and control panels with larger pneumatic tanks for storage.

Cost differentials
As shown in Figures 1 and 2, the primary changes in equipment are substitutions and not additions. The modified tank used in this work was plastic so the bottom valve had to be changed by drilling out the air valve and tapping in a 0.25-inch FNPT. The three-stem faucet is slightly higher in cost than a comparable good quality standard faucet. The are a few additional fittings and tubing plus an additional DLFC. As shown, the WOW version increases the cost of manufacture by about 15 to 20 percent.

Conclusions
WOW RO improves both the convenience and economics of the home RO systems. You get higher quality, faster production, faster refill rates, more storage capacity and faster dispensing. If you use 1,000 gallons of drinking water per year, the water savings from waste alone is over 9,000 gallons per year. At an average cost of $5 per 1,000 gallons, that’s $45. In addition, prefilters will only process 3,000 gallons of feed water instead of 11,000. Filter changes will only be required one-third as often and save two additional service calls. Note that once-a-year filter replacement on a typical RO may leave the membrane unprotected because the total throughput on the filters may well exceed their rated life. The hidden benefit is that you will actually be protecting your system by not overrunning prefilters and at far less cost, thus longer membrane life and more savings!