Ingredient Water Treatment President Hall Miller announced he was awarded Patent # 8459178, which will allow his SC-based company to proceed with plans for its ground-breaking Tasty Tea™ system.

ENPRESS LLC, announced the formation of an exclusive strategic partnership and immediate availability for sales and distribution of SECCUA ultrafiltration (UF) products through the ENPRESS ONE®–Water Filtration Simplified ® product offering. This strategic alignment will bring inside-out UF products to the forefront of the marketplace for POU/POE applications and markets.

Following the successful release of the Sustainability Certification standard, WQA S-803: Product Sustainability for Activated Carbon Water Filtration Systems, the Water Quality Association is now recruiting members to participate on industry task forces to be assembled for the purpose of drafting revised language for additional product categories to be included as annexes to this existing voluntary standard. The first two product categories on the table for immediate task force action will be UV treatment systems and end-point/dispensers (to include coolers/heaters /carbonators). All potential stakeholders from manufacturers and dealers to academics and regulators are encouraged to participate in bi-weekly calls that will be convened to accomplish this next phase of standard development work. Interested parties should please contact Stuart Mann, Sustainability Certification Supervisor, SMann@WQA.org or phone (630) 929-2546.

IAPMO solicits public comments for 2015 UPC and UMC
The International Association of Plumbing and Mechanical Officials (IAPMO ®), publisher of the Uniform Plumbing Code (UPC©) and Uniform Mechanical Code (UMC©), is calling for public comments on the 2013 Report on Proposals for the 2015 editions of these American National Standard designated model codes. The public comment form, as well as instructions and background on IAPMO’s ANSI-accredited consensus development process, can be found at www.iapmo.org/Pages/ReportonComments.aspx. All comments should indicate the exact wording recommended as new, revised or to be deleted, as well as state the problem the recommendation will resolve and the specific reason for making the comment. No comments will be accepted after the 5 p.m. PST deadline on January 3, 2014. All public comments will be distributed to the Technical Committee members in March and reviewed at their meetings, April 28-May 2, 2014, in St. Louis, MO. Copies of the Report on Proposals will not be available in hard copy at these meetings. Interested parties are encouraged to download a digital version at www.iapmo.org/Pages/default.aspx.

Energy Recovery Inc.’s technology will be used in the Carlsbad Desalination Project to help reach its carbon-neutral goals while significantly reducing overall energy costs. IDE, technology provider and future operator of the plant, awarded Energy Recovery a contract for its innovative energy recovery device (ERD) technology for the project, which will be the largest desalination plant in the western hemisphere. As part of the agreement, Energy Recovery will provide 144 of its PX Pressure Exchanger Q300 units to the seawater reverse-osmosis (SWRO) plant, aiding the estimated production output of 189,250 cubic meters of desalinated water per day (equivalent to 50 million gallons per day). The units are expected to ship by the end of the year. 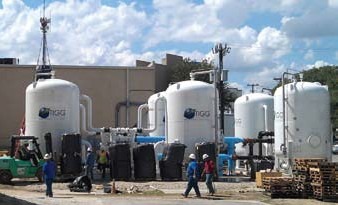 TIGG Corporation won a competitively bid contract to rent three of its activated carbon dual-vessel skid systems for the San Antonio Water System (SAWS), which went online in August. The systems are capable of purifying more than five million gallons of water a day. The integrated units were engineered at TIGG’s Oakdale, PA. headquarters. The GAC adsorption systems are being used to proactively remove TOCs and THMs from Canyon Lake, a nearby potable surface-water supply, to reduce potential for formation of DBPs in the distribution system and ensure compliance with US EPA Stage 2 DBP regulations. The agreement could be worth up to $2.5 million. The contract also included operational training for SAWS employees.

Quench has been selected to be the nationwide provider of filtered drinking water coolers and ice machines for Johnson Controls, which serves customers in more than 150 countries. Johnson Controls’ commitment to sustainability, dating to the company’s founding in 1885, motivated the company to switch to Quench’s filtered drinking water coolers. WaterGroup warehouse opened
WaterGroup announced a new warehouse location in Tampa, FL, at 5405 Boran Place, conveniently located off Interstate 4. The new location already has stock available and ready to ship to regional customers. This location will also act as a main shipping point for many of the company’s Florida customers, which will save regional clients freight costs and time.  Additionally, WaterGroup’s customer service team will arrange local pickups at the customer’s request and automatically route customer orders to the best warehouse location.

UL (Underwriters Laboratories) announced the launch of its global water systems validation services, including Drinking Water Treatment Units. UL Water Systems Validation Services will provide clients with evaluation of their products to criteria defined by the manufacturer to determine the validity of specific and individual marketing claims. Products meeting manufacturers’ claims will be issued certificates of validation from UL. This service is currently available from UL via both of its state-of-the-art testing facilities in South Bend, IN and Bangalore, India.

The East European water cooler market advanced by 5.2 percent in 2012 to 1.7 million units at the end of the year, according to the latest report from Zenith International. The POU segment, which scarcely existed in the region a few years ago, is now climbing rapidly and has reached 50,000 units, a increase of 21 percent. Bottled water coolers continue to dominate with 66 percent of the market, but their share has dropped in recent years. Nevertheless, the segment experienced its strongest growth since 2008, rising by 3.5 percent to 1.1 million units. Dispensers and pumps remain a significant part of the cooler industry in East Europe, representing over 30 percent of the market. Although POU is still a niche market in East Europe, it is expected to expand substantially over the next five years. Zenith forecasts continued overall growth, taking the total to 2.2 million units in 2017.

Innovation top of the bill during Aquatech Amsterdam

Water technology innovation will be at the top of the bill at Aquatech Amsterdam 2013, the world’s leading trade exhibition in the field of process, drinking and wastewater. There has been massive interest from exhibitors in the Aquatech Innovation Award competition, which is being organized for the eighth time this year. Having over 70 innovative product submissions for 2013, Aquatech Amsterdam’s organizers have never before received so many registrations. Winners will be announced on November 4 during Aquatech Amsterdam’s evening opening ceremony. The trade exhibition will be held from November 5 at Amsterdam RAI.

Swedish ozone generator manufacturer Primozone has been elected to join the American Water Works Association’s ozone standards committee. The Oxygen for Ozone Generation Committee’s aim is, among other things, to “develop standards for ozone treatment for water, including B304–Standard for Liquid Oxygen for Ozone Generation for Water, Wastewater, and Reclaimed Water Systems.”

The combined water cooler markets of Australia and New Zealand stood at nearly 520,000 units in 2012, according to two new country reports from industry expert Zenith International. Australia has far greater scale, with a 90-percent share. There has been an overall decline in recent years, starting with the financial downturn in 2008. Since then, weak business and consumer confidence have contributed to continuing pressure. Bottled water coolers remain the prevalent segment in both Australia and New Zealand, accounting for 61 and 60 percent of the national totals, respectively. Nevertheless, there has been a significant move to POU mains water units. Zenith forecasts further strong growth for POU, driven by aggressive promotion. By 2017, the segment is expected to reach 55 percent of the total in New Zealand and 41 percent in Australia. The overall cooler market in the region is projected to approach 560,000 units. Australia is anticipated to be the main contributor, while New Zealand’s installed base remains almost static.