Boil Water Orders Abound in the US

Once in a while I get a call from either a consumer or colleague asking how many boil water notices are issued per year in the US. Although years ago this information was tracked and summarized for the public, this is no longer the case. Today, information on boil water orders is best compiled from reports in the popular media. A search through Google News quickly reveals a plethora of boil water notices are routinely issued across the nation.

The why and how Boil water notices are sometimes issued due to a recognized waterborne outbreak or detection of Escherichia coli or other fecal indicator bacteria in drinking water. Public water utilities routinely monitor for indicator bacteria and are required to respond and retest the system until they are no longer detected. Repeat testing can take 18 hours or more and thus, a boil water notice may be issued for several days until the problem is resolved. More often, boil water notices are issued when a change in the water pressure is noted or planned either due to leaks, main breaks or scheduled system maintenance that can leave the system vulnerable to contaminants seeping in. Water services may be absent during system maintenance where pipes are replaced or repaired, followed by a period of a day or more where a boil water notice is issued as a precaution. This was the case in Bettendorf, IA, where 250 consumers were without water during a 24-hour maintenance period, followed by an additional 24 hours of precautionary boil orders to allow time for any contaminants to be flushed through the system. The consistency of a 24-hour flush remedy and the potential for pathogens to be protected in biofilm are potential concerns.

Regardless of the source of the boil order, the procedures are the same. Suspect drinking water should be brought to a rolling boil for one minute. At elevations above 5,280 feet (one mile), boil time should be increased to three minutes. These times are expected to kill all major waterborne bacterial, viral and protozoan pathogens, including Cryptosporidium. Any water consumed (including that used to rinse foods eaten raw, to brush or rinse teeth or to make ice) should be boiled first. After the boil water advisory, all pipes and faucets, as well as water coolers, should be flushed for at least five minutes and at least three subsequent batches of ice should be discarded. The US Centers for Disease Control and Prevention also recommends running water softeners through a regeneration cycle, draining and refilling hot water heaters and changing all POE and POU filters. 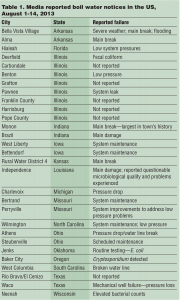 Vulnerable regions
Boil water notices are not rare. During the two week time frame from August 1 to August 14, at least 29 regions were under alert (see Table 1). Notices may be highly localized, involving just a few neighborhoods or streets where a water line break occurred, or they may involve entire communities, cities or even counties. The most common trigger for issuing a boil water order is a loss of pressure in the distribution system. Thus, areas with aging infrastructure or increased maintenance efforts are likely to experience higher rates of boil orders.

Maintaining the hydraulic integrity (positive pressure) of water distribution is important, given that insufficient pressure has led to disease epidemics worldwide (reviewed in Reynolds et al., 2008). Negative hydraulic pressure creates a backflow of nonpotable water into the potable water supply via back-siphonage, where significant pressure drops siphon contaminants into the system at cross-connections or leakage points, or backpressure due to pressures in the system that exceed the supply pressure. Even minor pressure fluctuations create back-siphonage where intrusion rates are estimated at > one gpm. During power outages, up to 90 percent of nodes have been shown to draw a negative pressure.

Whether precautionary or responsive, boil orders are associ- ated with significant inconvenience and cost for many. Consider the recent water advisory in Charlevoix, MI, where the Charlevoix Area Hospital was within the area of concern. A drop in water pressure and possible risk of bacterial contamination in the system prompted the boil water order. This meant that the hospital had to postpone scheduled surgeries and inform patients, visitors and personnel to not drink from facility sinks, drinking fountains or ice/drink vending machines for several days.

Faulty perceptions
How protective is a boil water notice? The extent of the risk is related to when the problem was first discovered compared to how long the problem has been occurring. Other important information includes: how often is the system monitored and how extensive is the geographical range of the contamination? Minimizing the risk is highly dependent on effective risk communication and identifying the best way to effectively inform the community that a boil order has been implemented. Given the best efforts by city officials to identify and report a problem, still some won’t receive the message and others will choose to ignore the warnings, or not properly follow the advice on illness prevention.

In one study of hospital employees from a community in the UK dealing with a large waterborne outbreak involving 300,000 households, only 85 percent (408/479) of respondents reported using boiled water. Another 12 percent (59/479) admitted that they did not boil their water for the full 16 days of the advisory. While most (88 percent) felt they were following the advisory, 20 percent washed their food to be consumed raw with unboiled water and 57 percent used unboiled water to brush their teeth. In this case, the boil water notice was due to a waterborne outbreak of cryptosporidiosis caused by the notorious Cryptosporidium parasite. Cryptosporidium has a very low infectious dose: only one to 10 organisms are required to initiate infection in humans, thus exposure to even small volumes of water may be enough to spread the illness.

POU piece of mind
The majority of boil water notices are precautionary, following a main break or scheduled construction event. While contamination is not certain, given that the routine microbial quality indicator tests require 18 to 48 hours to complete, water companies generally err on the side of safety. These precautionary orders remain in effect sometimes for days until water quality tests confirm that the drinking water meets all state and federal standards. The inherent, unpredictable nature of the distribution system and the quality maintenance of the distributed water add credence to the need for routine POU treatment.

In a recent press release following a boil order in Walters, OK, a representative from the Water Quality Association stated, “Instances such as this remind us that nothing is more basic than cleaner and healthier water.” The agency further stated that WQA tests and certifies water purification products to meet the quality standards set by the US EPA for removal of pathogenic microbes. Having a certified POU device in place is the piece of mind consumers need when the unexpected occurs.